Iran says IS attackers fought in Syria and Iraq

Iranian authorities linked the Islamic State attackers to a larger cell whose leader was killed by security forces last year. 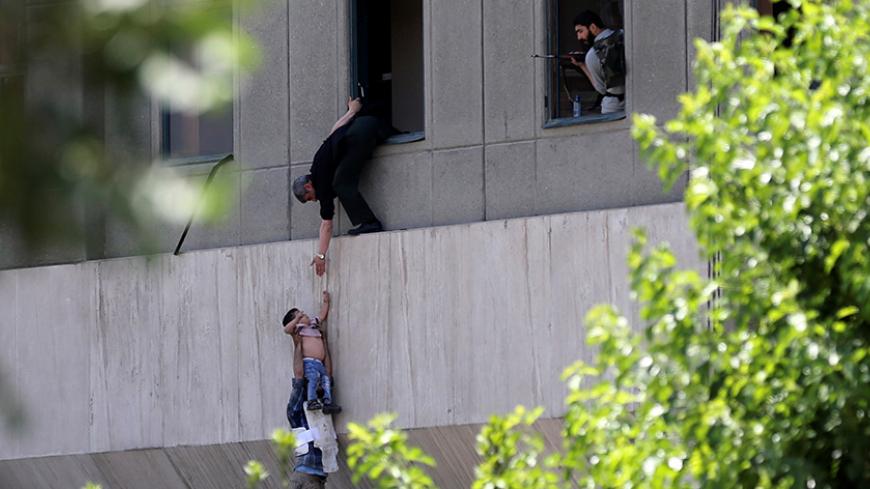 A boy is evacuated during an attack on the Iranian parliament in central Tehran, Iran, June 7, 2017. - Omid Vahabzadeh/TIMA via REUTERS
Arash Karami
@@thekarami
June 8, 2017

According to a statement by Iran’s Intelligence Ministry, the attackers behind the first Islamic State (IS) bombing inside Iran’s borders have been identified. Iranian news agencies shared graphic pictures of the corpses of the attackers and their first names. They withheld the family names. Some Iranian social media users shared the pictures of Seryas Sadeghi, one of the individuals who blew himself up in the attacks. Sadeghi was reportedly active in promoting extremism online.

The attacks on Iran’s parliament and the shrine of the founder of the Islamic Republic, Ayatollah Ruhollah Khomeini, on June 7 left 17 people dead and the capital shocked. According to the statement, the team of five attackers had previously belonged to Sunni extremist groups inside Iran but later joined IS, where they went to fight in Mosul, Iraq, and Raqqa, Syria.

Fars News published pictures of Abu Ayesha, whom they referred to as Abu Ayesha Kurdi; an accompanying article claims an Islamic Revolutionary Guard Corps (IRGC) sniper killed him. One of the pictures shows Abu Ayesha standing above three blindfolded individuals in orange jumpsuits on their knees, a common video set up for IS.

Contrary to a claim by the IRGC that attempted to link the attack to US President Donald Trump’s visit to Riyadh, Iran’s Intelligence Minister Mahmoud Alavi said, “It is too early to judge whether Saudi Arabia had any role in the terrorist attack.” Alavi, however, did accuse Saudi Arabia of supporting terrorist groups in Iraq and Syria.

Alavi added that “a number of individuals” connected to the attack have also been arrested. Alavi also said that Iran had prevented over 100 terrorist attacks in the last two years. In the last month alone, Alavi said that a number of two- and three-team cells were arrested.

During a speech that was planned before the attack on June 7, Iran’s Supreme Leader Ayatollah Ali Khamenei addressed the attacks and linked them to Iran’s support for the governments of Iraq and Syria in their fights against IS. “This event showed that had the Islamic Republic not stood in the center of these seditions, today we would have had many more of these encounters inside the country. God willing they will be eradicated.” Khamenei did not make accusations of blame. Instead, he said that the terrorist attacks would not “influence the will of the nation.”