Iran cracks down on Salafists in wake of Tehran attacks

Iranian authorities have rounded up a large number of terror suspects in Kurdish areas following the June 7 attacks in Tehran. 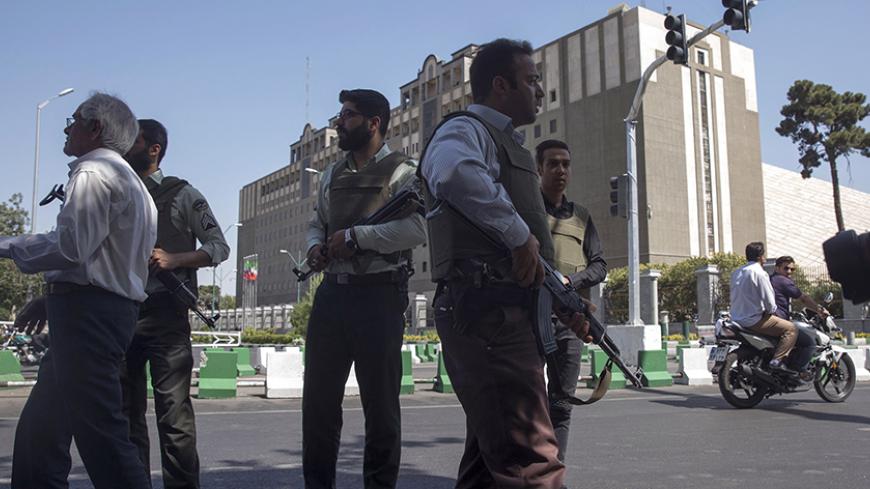 Iranian authorities have rounded up at least 150 people in Tehran and in the Kurdish areas in the west of the country following the June 7 terrorist attacks in the capital, which claimed 18 lives.

The five young attackers who pledged allegiance to the Islamic State (IS) in a video released shortly after the attacks appear to have traveled from Kermanshah province to Tehran undetected in early June. The rare but deadly strikes targeted two of the most guarded locations in the capital: the parliament and the mausoleum of the founder of the Islamic Republic, Ayatollah Ruhollah Khomeini.

How these men obtained firearms and explosives to carry out the attacks is not clear, but Iranian officials have admitted that the country's security establishment was taken by surprise. On June 27, parliament's National Security and Foreign Policy Commission held its second closed-door session to examine the June 7 attacks. "In this session, the new plan to maintain the security of the parliament and the ways to confront future possible incidents were discussed and necessary measures were taken," the semi-official Iranian Students' News Agency reported about the meeting. Iran has held IS directly responsible for the attacks, but it ultimately blamed the United States and "regressive" regimes in the Persian Gulf region for supporting the group. As a symbolic gesture, on June 18 Iran fired several missiles from the Kurdish areas in the west of the country, where the attackers came from, at an IS position in northeast Syria. "Our enemies should know that Tehran is not London or Paris; this was a small measure, and if they make another mistake, we will strike them with deadlier attacks," said Amir Ali Hajizadeh, the commander of the Aerospace Force of the Islamic Revolutionary Guard Corps (IRGC).

Since the June 7 attacks, security forces have taken no chances and have rounded up a large number of individuals mainly associated with Salafist groups in a bid to crack down on their activities, sources inside Iran and human rights activists from outside the country told Al-Monitor. "More than 50 individual terrorist backers were arrested in Kermanshah province following the terrorist incident in Tehran, and a number of explosive belts, electronic detonators and weapons were discovered," Mohammad Hossein Sadeghi, the prosecutor of Kermanshah province, said on June 25.

"No one has been freed apart from two women," said a source from the town of Paveh, where four of the attackers came from and where the Iranian authorities are said to have arrested more than 50 individuals. At least one of the attackers, Saryas Sadeghi, was reported to have been on the radar of the intelligence services, said sources in Paveh, but it is not clear how he managed to travel to Tehran to carry out the strikes along with four other attackers. "One of Saryas' brothers has been arrested, and he is still in custody," an activist who monitors the human rights situation told Al-Monitor.

In prisons across the Kurdish region, authorities have reportedly taken severe measures even against Salafist prisoners who were imprisoned before the attacks on Tehran.

According to a tally from Hangaw Human Rights News, a web-based organization that documents human rights abuses in the Kurdish areas of Iran, close to 150 people have been detained since the attacks in Tehran. While the real number could be much higher, Hangaw has verified the identity of 45 individuals who have been taken into custody across the Kurdish region in western Iran. "These individuals were arrested on charges of connections with Wahhabi groups, and according to witnesses, they were beaten during the arrests," Hangaw reported, referring to the puritanical Islamic doctrine originating from Saudi Arabia.

On June 24, Tehran prosecutor Abbas Jafari Dolatabadi confirmed that several people have been arrested in the capital and are under investigation in connection with the attacks, but he refused to divulge information about the cases to the press due to "security and intelligence reasons."

While government officials have maintained that terrorists cannot cause damage to the security of the Islamic Republic because of the readiness of the IRGC and other security forces, some officials have admitted that IS took them by surprise. "Given the huge improvement in the level of security in our country in recent years, the Daesh [IS] forces used the element of surprise, but I am confident now that the security and intelligence forces will maintain a safe environment and will not allow another terrorist attack to take place," Seyed Qassem Jassemi, a member of parliament's National Security and Foreign Policy Commission, said June 26, adding, "If it was not for the defenders of the shrine [Shiite fighters deployed to Syria], no doubt we would have had to fight Daesh [IS] in Kermanshah and Hamedan."

Jassemi's remarks echo claims repeatedly made by Iranian officials that to avoid fighting terrorist groups inside Iran, they need to be fought in Syria and Iraq. To this end, thousands of Shiite fighters from Afghanistan, Pakistan, Iraq and Lebanon — supported by Iran — have been deployed to Syria since 2011 to shore up President Bashar al-Assad's forces against jihadi groups, including IS. Iran also provides military assistance and advisers to the Popular Mobilization Units in Iraq to fight IS militants in the country.

But while the battles in Syria and Iraq are important for Iran, the attacks in Tehran appear to have been a wake-up call for Iranian officials, reminding them that domestic threats are as important as those from abroad. Moreover, it is becoming increasingly clear that blowback from the military interventions in the region may be a very real and serious prospect. In the meantime, perhaps the most immediate question is whether Iranian security forces have cast too wide a net in the search for terror suspects. If so, it has the potential of causing more trouble than it seeks to thwart.