Though Iran has announced that it has killed the Islamic State’s "emir" in the country, it continues to face serious security threats from a variety of militants. 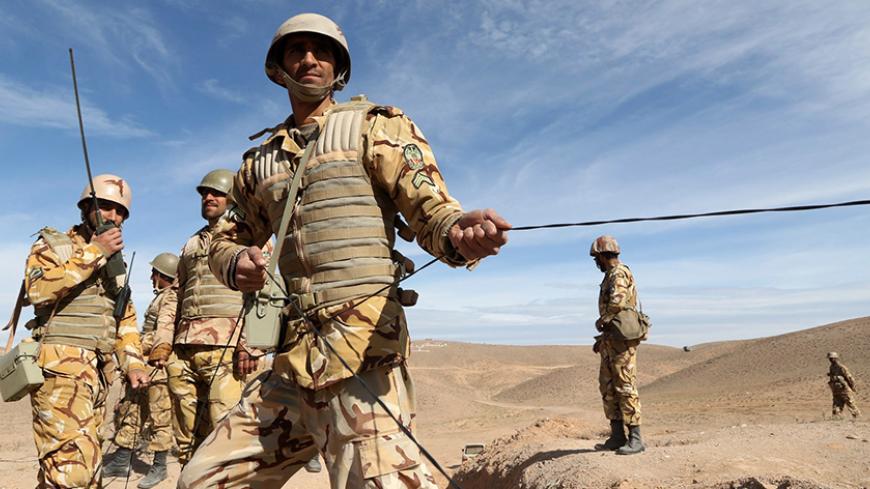 Iranian soldiers participate in military maneuvers in response to possible attacks by armed groups such as the Islamic State, on the outskirts of Torbat-e Jam town, near Mashhad, Iran, Nov. 17, 2015. - HOSSEIN HOSSEINZADEH/AFP/Getty Images

When Islamic State (IS) leader Abu Bakr al-Baghdadi announced on June 29, 2014, his self-styled caliphate, its borders were only about 20 miles from those of Iran. IS-controlled territory extended to the Iraqi border province of Diyala, posing a serious threat to Iranian national security. Tehran wanted to keep its borders far from the direct reverberations of the IS phenomenon, therefore hundreds of Iranian Islamic Revolutionary Guard Corps (IRGC) troops poured into Iraq to fight their first battle in Jalawla alongside Iraqi Kurdish forces and members of the Iraqi Badr Organization, which is known for its close ties to the Islamic Republic.

The fight to eliminate IS has continued in Iraq, with ever more Iranian involvement. Yet it seems as if the group has managed to find its way into Iran. On several occasions this year, the Iranian Intelligence Ministry has announced that terrorist plots within the country’s borders have been foiled. Two major announcements were made in June and August revealing, according to Iranian security officials, plans to attack the capital Tehran and other cities.

On Sep. 27, Pars News reported, citing unnamed sources, that security forces had killed the new leader of IS in Iran, code-named “Abu Aisha al-Kurdi." The news website wrote, “Some time ago in one of the border cities of Kermanshah, an individual who was supposed to be announced as the emir of Daesh [IS] in Iran was killed in a complex and massive operation with the hard work of the unknown soldiers of the imam,” in a reference to Intelligence Ministry agents.

This was not the first time that an announcement had been made about Abu Aisha having been killed in Iran. Intelligence Minister Mahmoud Alavi stated in a live program on Iranian state TV Aug. 24, “In collaboration with special forces, we managed to kill Abu Aisha al-Kurdi, the commander of the [IS] brigade in Mosul, and arrest and take out nine of his accomplices,” noting that the operation had taken place in Kermanshah province. A week earlier, Iranian security forces announced that they had dismantled an “[IS]-affiliated terrorist cell in separate clashes in western Kermanshah province, killing four and arresting more than six.”

According to an Iranian security source who spoke to Al-Monitor on condition of anonymity via a third party, IS was planning to infiltrate Iran from Iraq back in June. He added, “One of the groups succeeded in entering Kermanshah province, while the second group was ambushed by the IRGC’s Najaf Ashraf [base] forces.” The Iranian source elaborated, “Abu Aisha is the deputy operations officer in [IS] and he was sent to Iran to plan terrorist attacks and build the structure of his group here. It’s true that he entered [the country], but he was under our watchful eye from the beginning, and we were able to track his moves and finally kill him and arrest others.”

It is worth mentioning that an IS member with the name Abu Aisha al-Kurdi was announced dead in Makhmour, southeast of Mosul, in April. A statement by IS said he was a suicide bomber and was killed while attacking Iraqi army posts. A report by Kurdish news network Rudaw stated that Abu Aisha’s real name was Fadel Badr and that he was in charge of the security affairs for IS. This was also reported by Iran’s Arabic-language Al-Alam news channel, which described him as “the Butcher of Daesh.” It is not clear whether the two Abu Aishas are the same individual.

The Iranian security source told Al-Monitor that Iran is facing a serious terrorist threat and that different military and security apparatuses in the country are closely coordinating their efforts to tackle this challenge, saying, “The Islamic Republic is countering terrorism regionally and within the country. The preventive tactics we are adopting are proving to be efficient. The most important thing is that people are cooperating with the authorities.”

The tactics the source referred to involves stopping people from joining IS. Alavi claimed in August that his country had “spotted and thwarted more than 1,500 young people who intended to join [IS].” This means that there are others who were not stopped from joining IS, and may soon become the next big security challenge facing Iran.

“These groups are being used by some desperate regional governments who want to destabilize Iran,” the Iranian security source said. “Iran’s main mandate has become combatting terrorism around the region, while the main target of others is spreading terror all over the globe. They are doing this to serve the agendas of their bosses.” The source elaborated, “Our expertise in combatting terrorism cannot be challenged. We gained experiences in Syria and Iraq, and also from our friends in Lebanon. But this alone isn’t enough to help us overcome such threats. It’s important to mention that without the help of local communities, this effort can’t be efficient.”

IS has so far only had a few known Iranian members. One of them was a suicide bomber with the nom de guerre Abu Mohammad al-Irani. He blew himself up in Ramadi in May. Reza Niknejad is another Iranian who was openly linked to IS. The young Iranian-American allegedly traveled to Syria in 2015 after being recruited by a fellow high school student in Virginia. His fate is unclear.

While the threat from IS seems to be growing by the day, Iran is facing other security threats. Jaish al-Adl has for years been active on the country’s southeastern borders, in the Sunni-dominated Sistan and Baluchistan province. The group’s strength has been contained during the last few years by the killings and arrests of its leaders. Another Iranian concern stems from Kurdish Democratic Party of Iran (KDPI) militants, who have resumed their fight after a decadeslong dormancy and started causing havoc near the border with Iraq. Iranian officials blame the renewed violence on alleged Saudi support for these groups.

KDPI spokesman Loghman Ahmadi told Al-Monitor, “We do not have any relationship with Saudi Arabia on any level. Iran makes these accusation to portray the Kurdish struggle for freedom as orchestrated from outside and links it to its own enemies in order to not be held responsible for the oppression it subjects the Kurdish people to.” Yet, Ahmadi added, “It is however important to underline that we — like all nations of the world — see it as our right to have a relationship with any country we deem supportive of our struggle.”