The rise of the Islamic State's branch in Afghanistan poses a new challenge for the Islamic Republic, as it is becoming a magnet for Iranian Kurdish recruits. 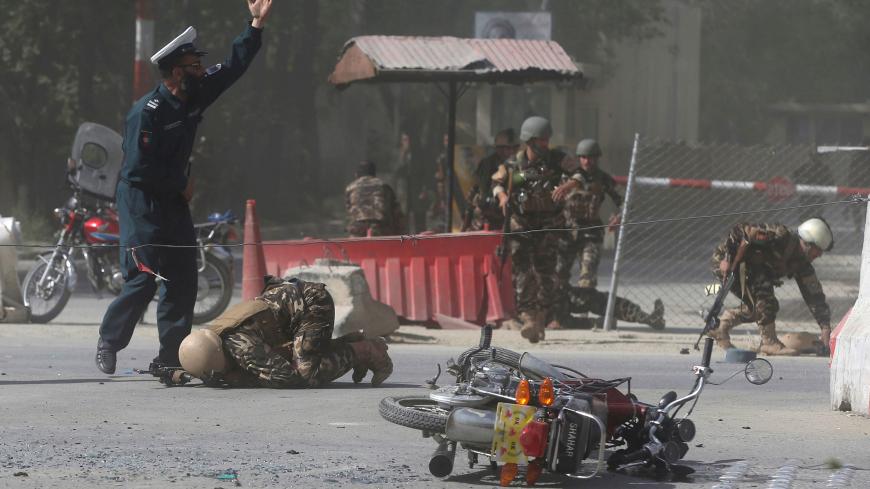 Afghan security forces are seen at the site of a second blast in Kabul, Afghanistan, April 30, 2018. - REUTERS/Omar Sobhani

A group of journalists had gathered at the site of a bomb blast in the center of Kabul, the Afghan capital, on the morning of April 30. Suddenly, a suicide bomber carrying a press card slipped past police and approached the journalists. As the bomb he was carrying went off, seven media workers died on the spot. Two more later died of their injuries, bringing the death toll of the two blasts to 26.

The Islamic State's (IS) Afghanistan branch, known as Wilayat Khorasan, claimed responsibility for the attacks and released an image, dated April 29, of the two suicide bombers standing next to each other with their faces covered. One of them was identified by IS as Qaqa al-Kurdi. IS did not reveal where Kurdi came from, but for decades, both Iranian and Iraqi Kurds have been known to travel in large numbers to Afghanistan in pursuit of jihad. They have swelled the ranks of a number of groups over the years, and most recently IS.

Mukhtar Hooshmand, an expert on tracking the movement of Kurdish jihadis from Iran and Iraq, told Al-Monitor that he has identified Qaqa al-Kurdi as a 29-year-old man from Iran's western Kermanshah province. The province has gained notoriety in recent years, as hundreds of young Kurds hailing from there and other Kurdish areas have traveled to Syria and Iraq to join IS and the jihadi group previously known as Jabhat al-Nusra (now called Jabhat Fatah al-Sham). Indeed, all of the IS suicide bombers who struck the Iranian parliament and the mausoleum of Ayatollah Ruhollah Khomeini in Tehran last summer hailed from Kermanshah province.

Following the IS attack in Tehran, Iran appears to have woken up to the jihadi threat and has arrested hundreds of Iranian Kurdish extremists. But as the IS project in Iraq and Syria is falling apart, Iranian Kurdish jihadis have changed direction and are now heading eastward instead to join Wilayat Khorasan, sources familiar with Sunni extremism in Iran's Kurdish areas told Al-Monitor.

Iran sees western Afghanistan as a vulnerable spot that could be exploited by IS and hostile countries. As such, the Islamic Republic appears to have tried to fortify its defenses by allegedly propping up the Taliban to fight IS as well as NATO and Afghan forces stationed there.

With over 500 miles of land border with Afghanistan, and the existence of a number of local Iranian Sunni armed groups in border areas, Tehran appears to be worried about its side of the frontier, including Sistan and Baluchestan, which is one of the poorest provinces in Iran. In May, Iran's ambassador to Kabul, Mohammad Reza Bahrami, described the existence of IS in Afghanistan as a mutual concern for Tehran and Kabul.

As President Donald Trump's anti-Iran rhetoric intensifies, there are now fears that the United States and other governments hostile toward the Islamic Republic may use Iraqi Kurdistan and neighboring countries — particularly Afghanistan — to destabilize Iran.

In response, Iran appears to have brought the Iraqi Kurds under its umbrella, warning them in recent talks in Tehran to avoid being used by hostile forces. Meanwhile, Tasnim News Agency, an outlet closely affiliated with Iran’s Islamic Revolutionary Guard Corps, highlighted in a recent report the threats that Iran faces in Afghanistan's Farah province. Tasnim's list includes the presence of a large NATO base in the province, IS and the increasing activities of Persian Gulf kingdoms such as Saudi Arabia. "Farah, as a province bordering Iran, is of special importance for Washington," Tasnim reported on May 19. "If Trump, who since the beginning of his presidency has always beaten the drums of war with Iran and [promoted] fearmongering of Iran, genuinely wants to do something against the Islamic Republic, the [NATO] military base in this province and the airport of Farah province would be a strategic location."

But while the existence of NATO and US forces in Afghanistan poses a challenge to Iran, the internal threat from disenfranchised Iranian Sunnis — including Kurds who join extremist groups — poses a far more serious challenge to Iranian authorities. Since the US attacks on al-Qaeda hideouts in Afghanistan and the US destruction of Saddam Hussein’s command centers in northern Iraq in the early 2000s, Salafist jihadi ideology appears to have grown among Sunnis in Iran and particularly among the Kurds. Indeed, a large number of Salafist jihadis from Iraq crossed into Iran after the US attack on Kurdish jihadis in northern Iraq, where they were allowed to stay and gradually spread their extremist ideology.

As such, thousands of Kurds in Iran have embraced Salafist jihadi outlook since the beginning of this millennium, with hundreds of young men joining various terrorist groups in Afghanistan, Syria and Iraq. Some of these recruits have eventually returned to Iran, which they had left in the mid-2000s to fight alongside al-Qaeda-linked groups in Iraq, such as that of Abu Musab al-Zarqawi. Some Kurdish jihadis inside Iran even set up a group named after Zarqawi's Tawhid wal-Jihad and engaged in violent clashes within the country.

"There were three waves of Kurds going to Afghanistan," Hooshmand told Al-Monitor. "The first wave, which were mainly Iraqi Kurds, was in the 1980s to fight alongside the mujahedeen against the Soviets. Another [wave], including both Iraqi and Iranian Kurds, occurred after 2002, to fight NATO forces." The third wave, according to Hooshmand, started with the emergence of Wilayat Khorasan in early 2015. "The number of Kurds going there is steadily growing," he said.

Two other sources familiar with the jihadi groups in western Iran confirmed this trend. "It is a well-known fact that before the emergence of Daesh [IS] and [Jabhat al-] Nusra, the extremist Kurds were going to Afghanistan," one of the sources told Al-Monitor on condition of anonymity. "Then they went to Iraq and Syria, but now they are going to Afghanistan again." The second source, who also spoke on condition of anonymity over concerns for his safety, concurred. "They travel to Zahedan [in Iran] and then use Saravan area [near Pakistan] to cross. … They either cross into Pakistan or directly go to Afghanistan."

Iran has long sought to shift battlefields away from its borders by using proxy forces to do its bidding. As such, its recent alleged support for the Taliban is yet another example of this tendency. While Iran arguably has managed to contain the jihadi threat within its borders so far, the growing number of young Kurds who go to Afghanistan to join IS presents a new challenge. In this vein, it may only be a matter of time before Iran will have to fight a renewed jihadi threat to its east, too.