Chinatown thrives in heart of Cairo

A Chinese district close to Al-Azhar University reflects the growth in Egypt's Chinese community over the past 10 to 15 years. 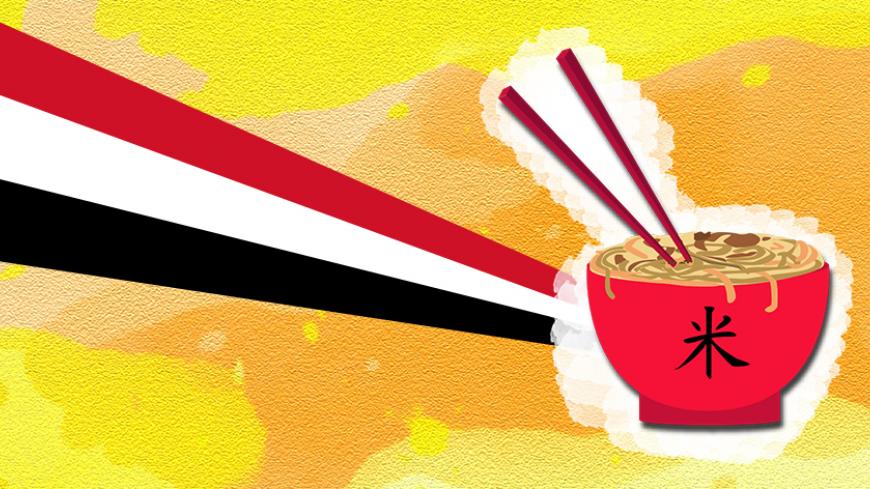 In a narrow street in Cairo’s Abbasiya district, a group of Chinese restaurants, stores and internet cafes thrive as Egyptian and Chinese customers, as well as tourists, find their way to this small Chinatown in the capital.

Cairo’s Chinatown is warmly embraced by Egyptians in the area who say that having a small Chinatown in Egypt can bring people from two different cultures closer and enhance relations between the two countries.

“The food is delicious and at a good price,” Mohannad Osama, one of the customers of a Chinese restaurant on Ahmed Saeed Street, told Al-Monitor.

Osama described the service as “good,” although he said he had some difficulty communicating with the Chinese waiters. “All in all, my friends and I enjoyed the experience a lot,” he said.

This was Osama’s first visit to the small Chinatown in Cairo, but he said he would love to go there again and enjoy the Chinese food, learn about Chinese culture and embrace new cultures.

Ahmed Ismail, a Chinese restaurant owner in the Abbasiya district who recently adopted Islam, told local media that his restaurant not only attracts Egyptians but also draws in customers from all over the world, including from Morocco, Malaysia, Indonesia and China, among other countries.

Ismail learned to cook in China. After coming to Egypt in 2013, he opened a restaurant to earn money and, at the same time, pursue his studies.

Ismail, who hopes to stay in Egypt for a long period, aims to open other restaurants in the country.

Many Chinese migrants can be seen in Cairo’s streets selling electronics, household utensils and even Ramadan lanterns. Some of them also sometimes knock on Egyptians' doors to sell products.

Chinese people have a good reputation in Egypt for their hard work and perseverance — a trait Egyptians believe is demonstrated in the quality of their restaurants and cafes in Cairo’s Chinatown.

“Going to Chinatown is always great. We now go periodically, at least once a month, although it is far from us,” Radwa Abdelsattar, who visits Chinatown with her husband, told Al-Monitor.

Abdelsattar, who usually goes to one of the famous restaurants there, said, “The taste, the quality and the quantity at the restaurant are exceptional. It gets better all the time. Even the most expensive and popular Chinese restaurants outside Chinatown in Egypt are not that consistent,” she added.

The new district shows the growth in the number of Chinese people who have come to Egypt, including students who study at the nearby Al-Azhar University, according to the Amsterdam-based academic database Arab West Report.

The report says Egypt’s Chinese community has grown at an unprecedented rate over the past 10 to 15 years, driven by the economically rising power of China and the Asian country’s increasing economic interests in other countries.

The academic database said that the number of Chinese in Egypt stands at 20,000, hailing from various social classes as well as different religious, ethnic and professional backgrounds.

“Chinese Muslim students at Cairo’s Al-Azhar University have been for decades a large percentage of the community in Egypt. Others come to Egypt for business. Since the rise of China as a foremost economic power, particularly this group has increased tremendously in numbers,” it said.

The success of Chinese entrepreneurship in Egypt is parallel to the Egyptian-Chinese relations, which have recently witnessed noticeable growth. In January 2016, Chinese President Xi Jinping visited Cairo and signed investment agreements worth billions of dollars with the Egyptian government.

“China supports Egypt’s efforts to maintain stability, develop the economy and improve livelihoods, and … play an even greater role in international and regional affairs,” Xi said, according to China’s Foreign Ministry.

During the Chinese president’s visit, Egyptian and Chinese officials inked 21 agreements to increase Chinese investments in the North African country. The deals covered the fields of infrastructure, electricity, transport and development.

According to Egyptian Minister of Trade and Industry Tarek Qabil, the volume of Egyptian-Chinese trade hit $11 billion in 2016. He added that Chinese investments in the Egyptian market totaled $594 million so far in the fields of industry, telecommunications and information technology, the state news agency MENA reported.