Al-Azhar weighs in on Egypt's dispute with Ethiopia over the Great Ethiopian Renaissance Dam. 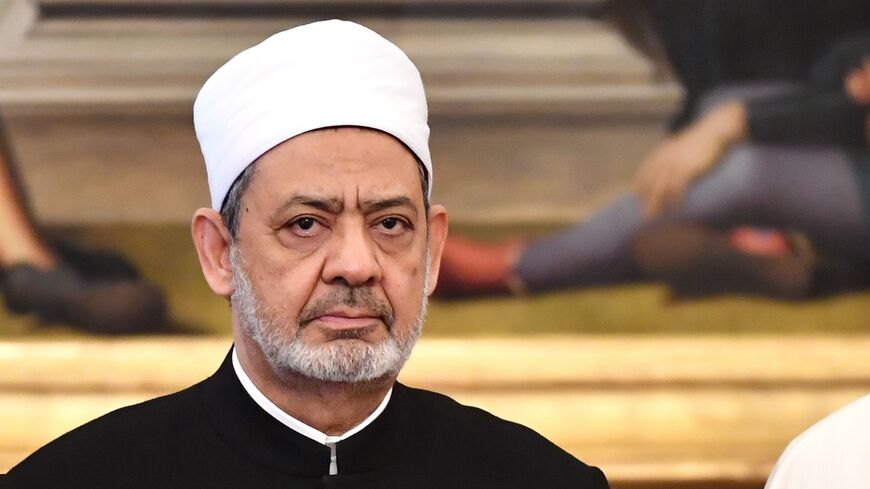 CAIRO — On June 4, Egypt’s Al-Azhar stepped into the controversy of the Grand Ethiopian Renaissance Dam. During a speech, to mark the United Nations’ celebration of the World Environment Day, Al-Azhar Grand Sheikh Ahmed al-Tayeb said that monopolizing natural resources, including water, is tantamount to stealing a God-bestowed right, and that water is common and collective property that no one has the right to undermine.

Tayeb castigated Ethiopian policy, saying that those who deny water “are unjust aggressors who ought to be internationally and regionally stopped to protect the people’s rights and against their perversion and corruption of the earth.”

Commenting on the possible use of force to resolve the crisis, Tayeb said the rules of “fighting enemies” in Islam “forbid us to kill children, women and young boys in the enemy’s army, just as it is forbidden to kill monks in their monasteries and peasants in their fields. It is also prohibited to demolish buildings in the enemy’s country.”

On June 6, Osama al-Hadidi, the director of Al-Azhar International Center for Electronic Fatwas, said during a telephone interview with Sada al-Balad satellite channel, that controlling and monopolizing water is forbidden as per the Islamic Sharia, and is seen as corruption, injustice and assault on the rights of others.

Al-Azhar’s statements came at a time when the dam crisis is growing increasingly complex, after all rounds of trilateral negotiations between Egypt, Sudan and Ethiopia to reach a binding legal on filling and operating the dam have failed.

Al-Azhar is the largest Islamic institution in Egypt and the Islamic world.

Hassan Nafaa, a professor of political science at Cairo University, told Al-Monitor that Al-Azhar's recent statements are one more sign of the exacerbation of the crisis. They come amid Ethiopia’s continued insistence on unilaterally filling the dam without signing a legally binding agreement with the downstream countries, Egypt and Sudan.

On March 30, Ethiopian Foreign Ministry spokesman Dina Mufti announced that his country would proceed with second phase of filling of the dam even if no agreement was reached with Egypt and Sudan.

Nafaa said, “Through these statements, Al-Azhar wanted to convey several messages at home and abroad. At home, Al-Azhar was trying to mobilize citizens around a single rhetoric and to create a conducive atmosphere for the state’s movements in the coming period, and at the same time to legitimize any measures taken by the government to preserve the rights of the Egyptian people. Al-Azhar called on the government and competent authorities to intervene to prevent any encroachment on the people’s rights.”

He said Al-Azhar also tried to speak to the humanitarian side of the countries of the world, stressing that the natural resources, including water, are a gift from God to all humanity, not to a particular group or religion and that no individual or state should prevent God’s natural resources that are the source of life for all men.

“At the same time, Al-Azhar's sheikh tried to assure the world that Egypt is not an aggressor country when he mentioned the rules of fighting in Islam, which forbids the killing of children and the elderly, and he defended the right that God granted to humanity,” Nafaa said.

He considered Al-Azhar’s recent moves came after Egypt exhausted its efforts for over 10 years without being able to reach a solution to the crisis. They also come amid Ethiopia's statement that it would build 100 new dams and would refuse to sign a legal agreement. This led the talks to hit a wall and prompted Al-Azhar to speak out.

On July 22, 2020, Ethiopian Foreign Minister Gedu Andargachew said, following the completion of the first stage of filling of the dam, “Congratulations. The Nile used to flow and now it has become a lake, from which Ethiopia will be able to achieve its desired development. The Nile is ours.”

On Aug. 8, 2020, Mufti said his country refused to sign an agreement that requires allocating specific shares of the dam’s waters to the downstream countries, Egypt and Sudan.

On May 30, Ethiopian Prime Minister Abiy Ahmed said his country would build more than 100 small and medium dams in various areas of the country in the next fiscal year.

Nafaa said the Egyptian government has to take action to protect Egypt’s water rights or otherwise will lose its popularity. He said, “The people will not accept that their government does not stand up for their water rights or lets them go thirsty. The current regime knows this very well.”

On May 10, Mohamed Ali, an Egyptian pro-opposition figure in exile (who has been found in contempt of several court orders) called upon Egyptians to take to the streets June 10 in a “Nile Revolution” to overthrow a regime that has “failed” to protect Egypt’s water rights.

On June 1, seven political parties and more than 80 public figures announced the establishment of the Popular Front for the Preservation of the Nile River with the aim of uniting ranks to protect Egypt’s historical rights to Nile waters.

Ahmed al-Sawy, the editor-in-chief of Sawt al-Azhar magazine (Voice of al-Azhar), told Al-Monitor that the institution stressed the need for water resources to be dealt with fairly, away from any attempts of water control or political exploitation.

Sawy said Al-Azhar believes that Egypt’s defense of its people’s rights to their share of water is an undisputed duty.

Mustafa Bakri, a member of the Egyptian parliament, told Al-Monitor that Al-Azhar’s statements expressed the views of the Egyptian people, who are now aware of Ethiopia’s intransigence toward their water rights.

“Ethiopia did not respond to any of the Egyptian efforts or the warning of Egyptian President Abdel Fattah al-Sisi nor to the external mediation including that of the United Arab Emirates to resolve the crisis. Not even to the American initiative under then-US President Donald Trump, as Addis Ababa withdrew from the talks at the last moment. All this prompted the Egyptian state institutions, namely Al-Azhar, to respond and take action,” Bakri said.

On Feb. 26, 2020, Ethiopia announced its withdrawal from the Washington talks on the Grand Ethiopian Renaissance Dam and its refusal to sign any binding agreement.

On March 30, during a press conference on the banks of the Suez Canal, Sisi warned against any attempt at undermining Egypt’s water share. “No one can take a single drop of Egypt’s water,” he said.

Bakri added, “The international community must intervene urgently and immediately. All Egyptian moves are proof that the government will not stand idly by and will do whatever it takes to preserve the country’s right to Nile water.”

On May 26, a joint military exercise between the Egyptian and Sudanese armies was launched with the participation of land, sea and air forces from both countries.