Why Trump-Abbas meeting has rattled Netanyahu

Israeli Prime Minister Benjamin Netanyahu is concerned that the US president's inviting Palestinian President Mahmoud Abbas for a meeting in the White house, well before many other important world leaders, reflects a determination to advance a two-state deal. 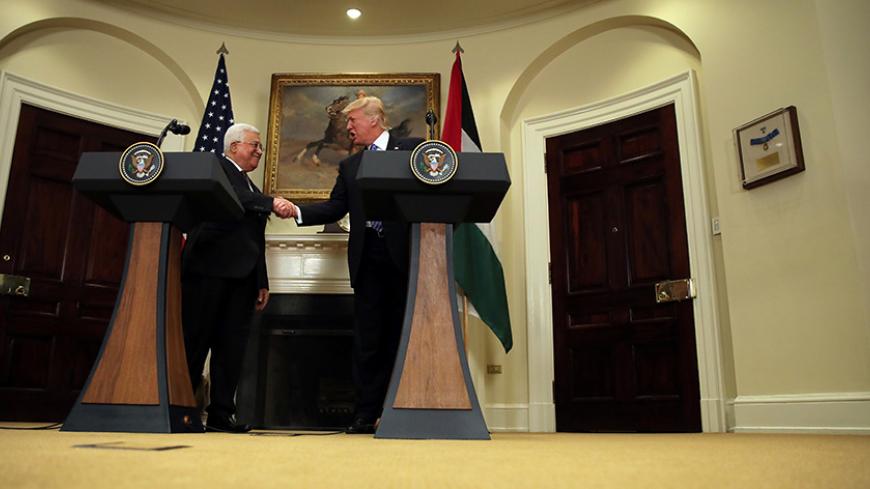 US President Donald Trump shakes hands with Palestinian President Mahmoud Abbas as they deliver a statement at the White House in Washington, May 3, 2017. - REUTERS/Carlos Barria

Donald Trump was not the first American president to welcome Palestinian President Mahmoud Abbas to the White House. As at the meetings with President Bill Clinton, when Abbas sat next to PLO leader Yasser Arafat, and subsequent talks with Presidents George W. Bush and Barack Obama, the sides discussed a diplomatic process with Israel, the need to combat terrorism, the severe economic problems in the Palestinian territories and opportunities to promote regional peace. It’s too soon to tell whether Trump’s stated desire to make a deal between the Israelis and the Palestinians will bring the sides closer than did the efforts of his predecessors, all of which ended in deep Palestinian disappointment. But there are several hopeful signs in this latest meeting.

The first is the invitation itself, extended to Abbas so early in the US president’s term. A stateless leader, a president who barely controls his own territory, got the nod before heads of far larger and more important countries standing in line for a photo-op with Trump. It placed Abbas in the same tier of White House invitees as Israeli Prime Minister Benjamin Netanyahu, Deputy Saudi Crown Prince Mohammed bin Salman Abdul-Aziz, Egyptian President Abdel Fattah al-Sisi and Jordan’s King Abdullah II. And all within the first six months of Trump’s first term.

The second encouraging difference lies in the Israeli prime minister’s special relationship with the US president and his cohort of advisers and donors. Abbas’ greatest rival was accorded a royal welcome at the White House in February, and will probably be among the first world leaders to host Trump. In light of these special relations, Netanyahu will be hard pressed to attack Trump for attempting to undermine his favorite delaying tactic, the status quo, and to accuse him, as he did President Barack Obama, of pro-Islamic leanings. Throughout the election campaign, and since taking office, Trump has been exposed to the views of donors and advisers who support the views of the Israeli and Jewish right. Abbas was given an opportunity this week to present the views of the Palestinian side directly and to stroke the presidential ego.

The third difference lies in Trump’s unique character. His predecessors had sent experts to study the positions of both sides, to analyze the underlying problems and recommend solutions. The sum total of their efforts was less peace and more Israeli settlers in areas claimed by the Palestinians for their future state. But Trump is a businessman, striving to "close a deal" that will benefit the United States but primarily his ego. He is not interested in complaints. He is bored by other people’s problems. So don’t talk to him about obstacles; just get rid of them!

After standing beside Netanyahu at a joint February news conference and blurting out his bizarre statement that he doesn’t care if the sides agree on a one-state or two-state solution, Trump’s advisers convinced him that the only viable deal to be struck in the Middle Eastern political bazaar is to divide the land in two along the 1967 Israeli borders (with some adjustments), including the city of Jerusalem that both claim as their capital. This is exactly the solution to which Abbas has aspired for years. For Netanyahu, however, there is no solution more dire — both ideologically and politically — than a withdrawal from the West Bank and a surrender of Israeli sovereignty over the whole of Jerusalem. So as not to arrive at such a dangerous juncture, he is placing obstacles along the road leading to it.

On his White House visit, Netanyahu laid down two conditions for a peace agreement with the Palestinians: Palestinian recognition of Israel as the state of the Jewish people and an end to incitement against Israel. Unfortunately, he said, the Palestinians reject both. “So, unfortunately, the Palestinians not only deny the past, they also poison the present,” Netanyahu complained to Trump. But the issue of Israel’s recognition as a Jewish state has already been resolved. The Palestinian Authority and member states of the Arab League accepted the statement of principles presented by Secretary of State John Kerry in December 2016 in his end-of-the-term speech. Kerry's second principle was the implementation of UN Resolution 181 regarding the establishment of a Jewish state alongside an Arab one.

A solution has also been found to Netanyahu’s complaint about Palestinian incitement. In fact, the prime minister himself came up with the solution back in 1998, when Clinton acceded to his demand for the establishment of an Israeli-Palestinian-American committee to eradicate incitement by each side. It’s safe to assume that Abbas told Trump, as he often tells journalists, about Netanyahu’s stubborn rejection of the Palestinian proposal to reconvene the long-dormant panel.

Netanyahu systematically conditions launching talks with the Palestinians by a recognition of Israel as the homeland of the Jewish people. In the past Abbas had his own conditions (settlement freeze) for meeting Netanyahu and relaunching talks. But he has not mentioned those conditions lately.

While Abbas is engaged in addressing all Netanyahu's preconditions for a Netanyahu-Abbas meeting, the Israeli leader is busy coming up with new ones. In an April 19 interview with the Japanese newspaper The Asahi Shimbun, Abbas made clear he would agree to an invitation from Trump to meet with Netanyahu without insisting on the Palestinian preconditions of a freeze of Israeli settlement building and the release of Palestinian prisoners. At about the same time, Netanyahu pulled out another demand: that Abbas act to abrogate a Palestinian law obliging the Palestinian Authority to support the families of Palestinians killed while committing terror attacks and those serving time for such crimes in Israeli jails.

On May 1, Israel’s annual Remembrance Day for the Fallen, Netanyahu took the opportunity to try to spoil Abbas’ meeting with Trump. “President Abbas, who is going to meet with President Trump this week,” Netanyahu said. “How can you speak about peace with Israel, and at the same time pay murderers who spill the blood of innocent Israelis?” Trump presumably was not thrilled to hear Netanyahu accusing him of buddying up with supporters of Muslim terrorists. And if the American president insists that Abbas end the practice, Netanyahu may be asked to repay the favor in the hard currency of a halt to settlement construction. If so, he is unlikely to be able to deliver the goods within the constraints of his current governing coalition.

In this zero-sum game over Trump’s heart and mind between Abbas, who seeks to break through the diplomatic stalemate, and Netanyahu, who would rather perpetuate it, the Palestinian had the upper hand this week. Until the next round.