Will a two-state solution be announced in November?

The US administration is discreetly testing Israeli and Palestinian reactions to three options it is currently contemplating to advance the two-state solution. 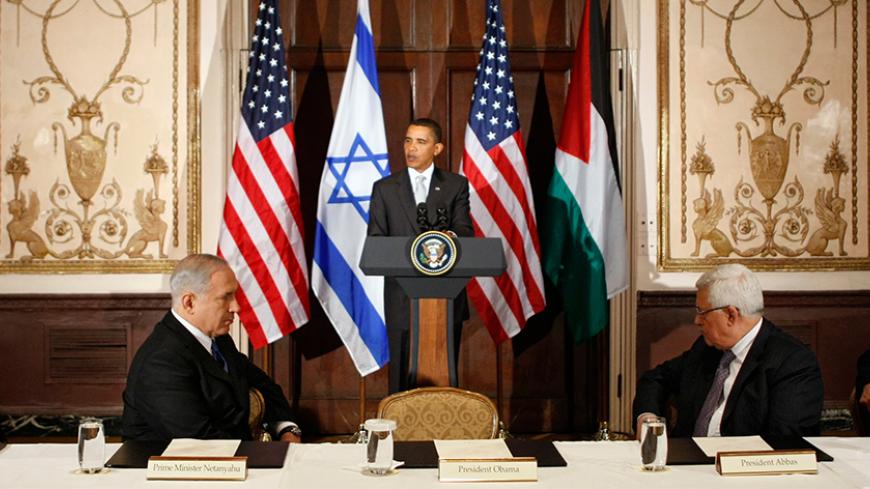 Over the past century, the month of November has seen a slew of ground-breaking events in the annals of the Jewish state. There was the Balfour Declaration, the British Empire’s declaration of support for the establishment of a national home for the Jewish people in the Land of Israel (November 1917); the UN resolution on the establishment of a Jewish state (November 1947); the visit by Egyptian President Anwar Sadat to Jerusalem (November 1977); and the Annapolis Conference, which launched the important negotiations between Prime Minister Ehud Olmert and Palestinian President Mahmoud Abbas on a permanent status arrangement (November 2007).

In between, following the Palestine Liberation Organization’s declaration of an independent state and its recognition of the State of Israel, US President Ronald Reagan decided to launch an official dialogue with the organization on reaching a peace arrangement with Israel. He made his move in November 1988, after the presidential elections and before George H.W. Bush was sworn in as the 41st president of the United States. The outgoing president, who had completed two terms in office, was no longer under pressure from Jewish voters. The incoming president, who inherited the PLO, was no longer under pressure from Jewish lobbyists. Before the Reagan-Bush handover, the right-wing government of the "Greater Land of Israel" led by Prime Minister Yitzhak Shamir was struck a crippling blow.

Prime Minister Benjamin Netanyahu is very familiar with the maneuver of taking on a difficult resolution at the end of a term. In 1988, he wrapped up four years in New York as head of the Israeli delegation to the United Nations. Before that he served as deputy chief of mission at the Israeli Embassy in Washington. These days he is busy preparing for a possible diplomatic tsunami to hit at some point between Nov. 8, 2016, and January 2017. A senior diplomatic source in Jerusalem who asked to remain anonymous told Al-Monitor this week that Israel is operating on the assumption that President Barack Obama will not leave the White House with a failing grade in resolving the Israeli-Palestinian conflict. Based on that assumption, the question is not whether Obama will make a diplomatic move, but what kind it will be.

The answer to this intriguing question is clutched tightly to the president’s chest. Obama learned the hard way that any hint of a measure that could threaten the status quo in the occupied territories will immediately provide fodder for Republican propaganda. According to a diplomatic source familiar with the hectic deliberations conducted recently by the Mideast Quartet, including a March 28 meeting in Jerusalem, Obama is weighing three formulas. One possibility is to support a proposed UN Security Council resolution recognizing a Palestinian state based on the 1967 borders. The second is pushing through a decisive resolution against the settlements. The third option is a combination of the two.

When the time comes to decide, shortly before Obama clears off his desk in the Oval Office, he will be handed a document summing up each of the three alternatives. The National Security Council and the State Department are cautiously examining how the sides involved will react to each move. The way it looks on the surface, the Israeli side is expressing vehement opposition to any move that is not tiny baby steps, such as pulling Israeli military forces out of the West Bank Palestinian towns of Jericho and Ramallah and allowing more Palestinians to work in Israel.

But Netanyahu knows this won’t cut it. Therefore, the National Security Council in Jerusalem is formulating alternative proposals to an international initiative. Netanyahu, too, is keeping his cards close to his chest. If he veers slightly away from the radical right, for instance by even temporarily expressing reservations about an Israeli soldier's execution of a wounded Palestinian, he risks the wrath of his coalition partners from HaBayit HaYehudi and from his own political home, the Likud.

The Palestinians are adopting the defensive tactics of a tennis player who waits patiently for his opponent to make a mistake and tries to avoid making any himself. They don't budge from their demand for a Palestinian state based on the 1967 borders, the release of Palestinian prisoners from Israeli jails and a resolution of the Palestinian refugee problem in the spirit of the 2002 Arab Peace Initiative. These principles are accepted by a decisive majority of the international community. Netanyahu is lobbing hollow balls into the Palestinian court in an attempt to score public opinion points. But Israel anticipated that Abbas would contemptuously reject the offer to pull troops out of Jericho and Ramallah. Accepting it would have been interpreted as agreeing to the continued presence of the Israel Defense Forces in Area A, in violation of the Oslo Accord.

Attempting to counter accusations that the Palestinian Authority incites terror, Abbas is once again proposing to reconvene the joint Israeli-Palestinian-American committee on the prevention of incitement. Netanyahu is once again ignoring the suggestion. With nothing to lose, Abbas tried to address the Israeli public over the heads of its leaders. In an interview with journalist Ilana Dayan on the popular program "Uvda," aired March 31 on Channel 2, Abbas said that the PA’s security forces go into schools to search for knives in the children’s schoolbags. According to him, at one school they found 70 boys and girls carrying knives and confiscated them, with the message that “We want you to live, and for the other side to live as well.”

In consultations ahead of the November decision, the United States is reserving a special role for Egypt. In addition to Cairo’s traditional role as conciliator/mediator in the Israeli-Palestinian conflict, as of January, Egypt is a member of the UN Security Council. Its vote could tip the scales in favor of a proposed Obama resolution on resolving the conflict or a resolution that Obama will not veto.

Cairo also has a symbolic value. In June 2009, five months after being sworn into office, Obama delivered a speech in Cairo in which he pledged to “personally” bring about the implementation of the two-state solution. He promised that “America will not turn our backs on the legitimate Palestinian aspiration for dignity, opportunity and a state of their own.” He added, “It is time … for all of us to live up to our responsibilities.” The last chance to live up to his promise to the Israelis and the Palestinians will come on Nov. 8, 2016, the day of the US presidential elections, and expire on Jan, 20, 2017, when the newly elected president and vice president are sworn in.