Bibi's two-state solution: State of Israel and State of the Jews

Israeli Prime Minister Benjamin Netanyahu told peace activists that he is willing to go to Ramallah, knowing that his preconditions for such contacts will immediately dissuade Palestinian President Mahmoud Abbas from extending him an invitation. 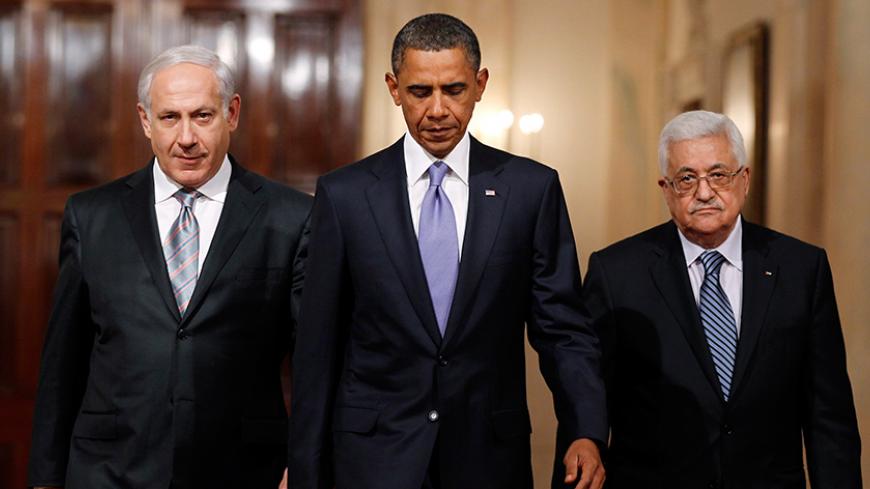 There were times when such an announcement by the leader of a right-wing Israeli government would have made front-page headlines: “I am ready now to go to Ramallah or any other place to meet and hold direct negotiations.” This, according to an announcement issued by the prime minister’s office, is what Prime Minister Benjamin Netanyahu told representatives of Women Wage Peace on Sept. 1. The prime minister even asked his guests, should they meet with Palestinian President Mahmoud Abbas, to convey him the message that he was willing to renew direct negotiations with him.

There were times when the words “the solution is two states for two people” would have spoiled the media festival over the opening of the school year for Education Minister Naftali Bennett, head of the HaBayit HaYehudi Party and Netanyahu’s coalition partner. On the left, no one even bothered issuing a reaction to the obvious contradiction between the prime minister’s willingness to launch negotiations “without preconditions,” and the unrealistic condition that he stated in the same breath at that meeting, according to which the Palestinian state would recognize Israel as “the national state of the Jewish people.” And, of course, not a word about a freeze on settlement building in the West Bank.

Politicians, like the news editors who ignored the announcement, know full well that the chances of Abbas inviting Netanyahu to the Muqata, the Palestinian Authority headquarters, to conduct negotiations on a peace agreement are akin to the chances of US President Barack Obama inviting him to the White House to discuss the nuclear deal with Iran. Coincidentally — or perhaps not so coincidentally — the announcement about the meeting with the peace activists was issued by the prime minister’s office almost at the same time as the Palestinian news agency Ma’an reported that Abbas had declared he was stepping down from the leadership of all PLO institutions.

The announcement on Abbas' behalf was made at a meeting of the Fatah central committee, ahead of the Palestinian National Council meeting being convened in Ramallah at the end of next week. Mohammed al-Madani, a member of the Fatah central committee and a close Abbas associate, said the next day that the move was designed to capture the attention of the dormant United States and European Union, and to pass on to them the following message: “I don’t want to hold onto a job that has become a kind of security doorkeeper for Israel, and anyone who wants to assume responsibility is welcome to do so.” Madani also noted that Abbas had even told Jordan’s King Abdullah during their meeting Aug. 30 that he was considering an announcement at the UN General Assembly at the end of September saying he has no interest in heading an authority devoid of sovereignty. So what interest could he have in shaking Netanyahu’s empty hands?

According to a senior US official who spoke on condition of anonymity, Washington is well aware of Abbas’ position, his advanced age and the battles of succession paralyzing the Palestinian leadership in the West Bank. The Americans, as well as the Europeans, know that former British Prime Minister and retired Quartet envoy Tony Blair does not have any real news for residents of the Gaza Strip, despite the contacts he is leading between Hamas and Israel. The official denial issued by Netanyahu’s office on this matter was designed to refute rumors that Blair had been authorized by the prime minister to discuss a package deal, which includes a cease-fire and a lifting of the Israeli blockade on Gaza. According to reliable information that Al-Monitor received, the denial is more credible than the rumor.

The battles for succession, which are expected to heat up on the day following Abbas' resignation, could deteriorate into violence and undermine Palestinian security coordination with Israel. Absent any hope of throwing off the humiliating yoke of occupation and the painful pinch of the blockade, a single pyromaniac infiltrating the bubbling Temple Mount (Haram al-Sharif) complex could provide the spark that would blow up the powder keg. A conflagration in the territories risks overshadowing the nuclear agreement with Iran — the most important legacy of Obama.

According to the senior American, the previous attempt that ended with a “poof,” as described by US Secretary of State John Kerry, doused any desire to send him to spend his remaining days at the State Department in yet another futile round of shuttle diplomacy between Jerusalem and Ramallah. Anyone burned once by the Israeli-Palestinian hot potato is careful not to go near it again. It’s better to dump it on the plate of the next president. Republican President Ronald Reagan, who was considered a “friend of Israel,” gave an official seal of approval to the PLO, over Israel’s objections and fury. He did so during the transition in December 1988, after George H.W. Bush was elected president but before he took office. Obama the Democrat, who in any case is considered — unjustifiably so — an “Israel hater,” is thinking of upgrading the head of the PLO to head of state status a little over a year before the end of his second term.

A draft resolution agreed upon by members of the Quartet (the United States, European Union, United Nations and Russia), which would be presented to the UN Security Council, would replace Security Council Resolutions 242 and 338. It would serve as a framework and source of authority for negotiations between Israel and the Palestinians. The new resolution would include recognition of an independent Palestinian state within the 1967 borders with agreed-upon amendments of the border lines, and express the Jewish identity of the State of Israel. The Obama administration assumes that neither side will jump with joy at UN headquarters and whip out its pen to sign a comprehensive peace agreement. This challenge, or headache, of creating arrangements in Jerusalem and a solution to the refugee problem will provide a full-time job for the next administration.

The final agreement about this hot issue will be made after the Iran nuclear saga clears the US Congress at the end of the month. It’s safe to assume that Obama is taking into account that candidates for the Republican presidential nomination will launch a mudslinging competition against the decision to recognize Palestine ''unilaterally,'' and will accuse the president of a last-minute grab. Jewish organizations are likely to pressure the Democratic contenders to distance themselves publicly from such a move. Behind closed doors they will thank Obama, who not only reduced the threat of a nuclear war in the Middle East but also opened the door to prospects of a peace arrangement of sorts in the region. Until then we will rejoice that Netanyahu deigned to hold a publicized meeting with the Women Wage Peace activists who had fasted outside his residence for 50 days to observe the first anniversary of Operation Protective Edge (July-August 2014). We will console ourselves with tall tales about a prime minister willing to travel to Ramallah to promote the two-state solution: the State of Israel and the State of the Jews.