Members of the Women Wage Peace movement — a group of women from all sectors, ages and communities — hope that their recent meeting with Prime Minister Benjamin Netanyahu will add another layer to the public movement they are building for peace with the Palestinians. 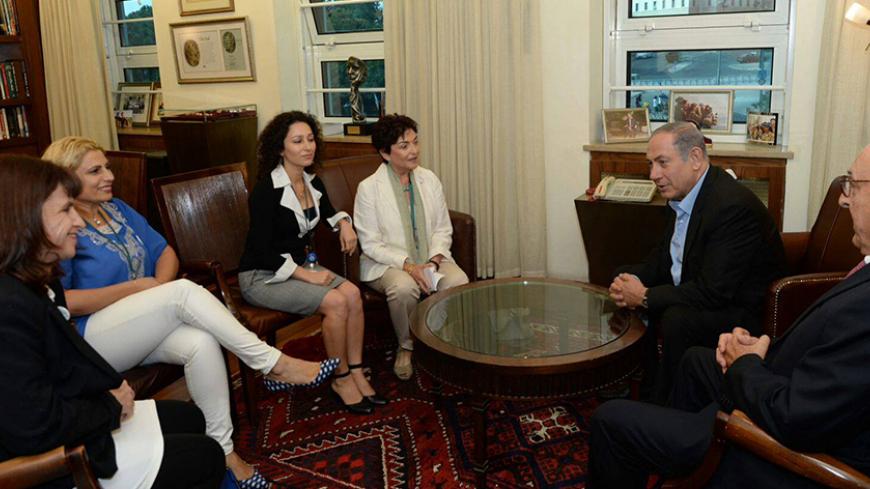 A week after having concluded their hunger strike near the prime minister’s residence in Jerusalem, the activists of Women Wage Peace were invited for a meeting Sept. 1 with Prime Minister Benjamin Netanyahu. The meeting was organized by the premier’s special envoy, attorney Yitzhak Molcho, at the request of one of the movement’s activists and co-founders, retired Justice Saviona Rotlevy. The female activists started their hunger strike on the occasion of the first anniversary of Operation Protective Edge (July-August 2014) and the movement’s establishment. They called on Netanyahu to promote a diplomatic arrangement to end the conflict. The hunger strike lasted for 50 days, similar to the duration of the operation in Gaza last summer. It saw the participation of some 300 men and women who joined the protest in rotating shifts throughout the summer months. Putting the hunger strike in the context of last summer, they dubbed their protest Tzom Eitan (Protective Fast), playing on the operation’s Hebrew code name.

During the protest, the prime minister’s wife, Sara Netanyahu, invited the women into her home, and in the conversation that ensued she asked them where the Palestinian women were. She then advised the female activists to address their protest to Palestinian President Mahmoud Abbas in light of his intransigence and the way he has chosen to boycott Israel.

Ayelet Harel, one of the activists, told Al-Monitor that during the first week of the hunger strike, they were visited at the protest tent by Ziad Darwish and Elias Zananiri, members of the Palestinian Committee for Interaction with Israeli Society, which is headed by Mohammed al-Madani, a member of the Fatah leadership. The two proposed that they meet with Abbas, relating that the Palestinian president had heard of their protest and had been following it. But the members of Women Wage Peace insisted on meeting Netanyahu first before meeting with the president of the Palestinian Authority (PA).

Some also thought that a meeting with Abbas in Ramallah before first expressing their views to the Israeli prime minister could create a rift in the movement, which from its inception sought to create a cohesive body of women from all walks of Israeli society, regardless of their political affiliation. As such, the movement does not suggest solutions for resolving the conflict, nor does it deal with issues such as the eviction of settlements, the partition of Jerusalem or the refugees. Their objective is to make peace and use every possible avenue out of the clear understanding that to resolve the conflict the parties need to be creative and open-minded.

In a way, the movement’s activists had hoped to get Netanyahu’s blessing to meet with the PA’s president. Rotlevy arrived at the prime minister’s office accompanied by three other movement members: Milana Yaari, who is a new immigrant from Uzbekistan, Jaffa resident Amal Abu Rihan Ramada and Harel. The four women come from different backgrounds, representing the multicultural blend of the movement’s members who decided to have their voice heard and advocate a different political discourse.

“Netanyahu was positive about our activity,” Harel told Al-Monitor. “He told us, ‘If you’ve come to ask me whether to meet with Abu Mazen [Abbas], then by all means do. Go and tell him that I’m willing to meet with him on any day and at any time without preconditions.’” Netanyahu, according to the activists, even jokingly added, “I can be in Ramallah within 15 minutes, and if I take the fast car it will take me less than that.”

Rotlevy said, “That meeting serves the interests of several players. In my opinion, Netanyahu wants to show the Israeli public that he is not a peace recalcitrant.”

Al-Monitor asked Rotlevy whether behind the words and promises the movement has the power to force decision-makers in Israel in general, and Netanyahu in particular, to break the diplomatic stalemate and initiate a move. “I personally feel that if we are able to build a critical mass of women — secular and religious, from the periphery or the center and of all ages — we will have a strong influential clout, that will engender some change,” she said.

The women have drawn their inspiration from the Four Mothers movement that was established in 1997 by four women whose sons were serving in Lebanon at the time, in a bid to bring about an Israeli pullout from south Lebanon. Despite the heavy criticism that was leveled at the movement, Four Mothers was able to grow into a strong pressure group that prompted many women to join its ranks. In the end, that movement brought about a major shift in the Israeli mindset, which consequently resulted in the withdrawal of the Israel Defense Forces from south Lebanon.

Zohara Antabi, one of the leaders of Four Mothers, joined in the Women Wage Peace protest in Jerusalem. She participated in the women’s hunger strike, sharing with them her insights from her movement's struggle that culminated in the withdrawal from Lebanon in May 2000. “Perseverance is women’s secret ingredient and this is what will break through this intolerable reality. Women can’t come to terms with a situation where they are told there’s no solution,” she told the hunger-striking women.

Rotlevy is convinced that women have an important voice, which is different from that of men who mostly see things in black and white. “Four Mothers was our inspiration. But we were also emboldened by the fact that the UN recognized that women can facilitate solutions in conflict-beleaguered areas where men have failed,” she said. Adopted in October 2000, UN Security Council Resolution 1325 recognizes the fact that women should be included in attempts to resolve bloody conflicts. “We have a different voice,” Rotlevy added. “Men do their mandatory military service and then they serve for years as reservists. Later they dominate the economic and political spheres, becoming prime ministers and defense ministers. This whole discourse becomes one dimensional, taking over the entire Israeli society.”

According to Rotlevy, the breaking point during Operation Protective Edge, from the women’s standpoint, was when they started feeling excluded from public discourse in issues relating to peace and security. “We could see female moderators on TV but no female experts. All we saw were generals who knew what was going to happen and everything was seen through the cross hairs,” she said.

The other discourse has developed a major voice. Presently, the movement counts some 14,000 women. It hopes to expand further and become a pressure group the way Four Mothers was. They are now planning their visit to Ramallah for a meeting with Abbas, which will likely take place next week. If the Palestinian president picks up the gauntlet and takes Netanyahu up on his offer, the women could say that they served as a bridge to peace between the two leaders who have not met in five years.

The chances for a meeting any time soon between Netanyahu and Abbas are not high. After the premier met with Women Wage Peace, his office issued a statement that he was indeed willing to go to Ramallah but that there were two conditions for reaching an agreement: Abbas has to agree to have the West Bank demilitarized and he has to recognize Israel as a Jewish state. The members of Women Wage Peace have their work cut out for them.