Israel: From Kitchenette to Octet

Akiva Eldar wonders why women in Israel are excluded from all focal points of crucial decision-making. 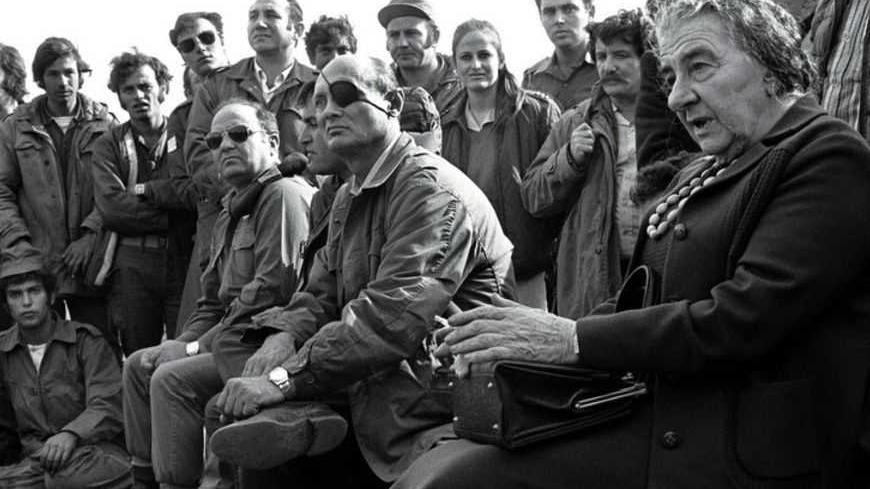 Prime Minister Golda Meir (R) accompanied by her Defense Minister Moshe Dayan, meets with Israeli soldiers at a base on the Golan Heights after intense fighting during the 1973 Yom Kippur War, Nov. 21, 1973. - REUTERS

For four years now, Israel’s fate has been placed in the hands of eight people — all men. It is the forum with the most influence on our physical existence in this country, known by its nickname, “The Octet.” Imagine: seven ministers sitting around Prime Minister Benjamin Netanyahu for discussions of war and peace issues. Each and every one, without exception, is a man.

Interestingly, this men’s club actually started out in the kitchen of a woman — none other than Golda Meir, the first and last woman to have served, so far, as head of the Israeli government (and earning such dubious compliments as “the only [real] man in the government,” “the only one wearing pants,” etc.).

At that time, the forum was nicknamed “the kitchenette,” because the select team of ministers convened in order to make decisions at the home of Golda Meir, and “the kitchen” was perceived as the most natural place in a woman’s home — albeit a prime minister — to debate serious issues.

In meetings of the defense and foreign relations cabinet [a small forum of government ministers], the picture is similar. Regular invitees to its discussions include the IDF chief-of-staff, the head of the Mossad, the head of the Shin Bet [Israeli Security agency], the head of the National Security Council and the head of military intelligence. Not one single woman. Israel is proud of having women pilots, women commanders of missile batteries, and women commanders of male company commander training courses. It even has a woman at the head of the IDF’s Manpower Directorate [Gen. Orna Barbivai]. But the important decisions, whether to send women to war or to endanger their families in a regional war — these decisions are made purely by men. Decisions about negotiations with the Palestinians and the freeze on settlements were also made by a strictly male forum.

Reserve Brig. Gen. Yisraela Oron is the only woman who has made it to the closest point of the decision-making juncture in the defense-diplomacy arena. In 2006, after proving her abilities in IDF uniform as chief of the Women’s Corps, she was appointed Deputy National Security Advisor.

In recent years, she has been active in various peace initiatives, among them the Geneva Initiative and the Israeli Peace Initiative. Five years ago we met at an Arab-Israeli conference held on a small estate near Oxford at the instigation of the Oxford Research Group, headed by Gabrielle Rifkind. Representatives came from Egypt, Saudi Arabia, the Arab League, the Palestinian Authority, the US and the European Union. All of them, without exception, were men. Oron was the only woman in the group numbering six Israeli representatives.

In an interview with Al-Monitor on the occasion of International Women’s Day, Oron said that exclusive clubs, like men’s clubs, do not tend to accept new members. Most of the people who deal in such issues are men, “and men bring in men friends." They don’t bring in women friends. Since there are few women in such places, they bring in few women. Afterwards, the generals go into politics and bring their friends into government and the Knesset. Since there are few women generals, there are also few women members of Knesset and government ministers." Oron knows many gifted women who could contribute to these matters and is even active in various efforts to promote them to key positions.

Oron praises the Minister of Culture and Sports, Limor Livnat of the Likud, for her efforts to advance female representation in the public service. “Unfortunately, the women from my camp, the peace camp, are the ones who focus on their mission and forget that they have an additional mission that men don’t have," she says.

During a 2010 debate in the Knesset’s Women’s Committee regarding the (lack of) female participation in diplomatic negotiations, HaTenua leader Tzipi Livni, then head of the opposition in the Knesset, complained that “as long as they don’t pose a political threat, they’re not brought in.” But in the government ministries in which she served, Livni is not remembered as a prominent feminist nor as a promoter of women.

In the year 2000, the UN Security Council adopted a resolution (Res. 1325) urging member states to ensure increased representation of women in diplomatic processes and politics in recognition of their ability to resolve long-standing conflicts. Five years later, based on the UN resolution, Israel adopted a law mandating the inclusion of women in “decisions relating to national policy and in ways to resolve the diplomatic conflicts in which Israel is involved." It was actually minister Avi Dichter, former chief of the Shin Bet, an organization known for its “manliness,” who announced that “pants are not a pre-requisite item in a decision-making process — neither on diplomacy, nor on defense.”

Oron is in full agreement, of course. “Men don’t have any preferred skills in the area of diplomacy and defense,” she says. “What manly flavor should accompany defense issues? What is the gender color of the diplomatic issue?” she asks and replies, “our defense arena urgently needs to be ‘civilianized.’ When the battles are being waged on the outskirts of [the southern towns of] Ashkelon and Beersheba, which are enduring rockets — half of the fighting force is women. It’s inconceivable that they will not participate in decision-making processes directly relating to them. Defense is not just tanks and airplanes, it’s also civilian and economic issues.” In order to make her point, she brings up the women’s group named “Four Mothers”, which conducted a public campaign that significantly influenced the decision by 'Mr. Defense' himself, then-Prime Minister Ehud Barak, to withdraw Israeli forces from Lebanon in May 2000. “They were belittled for being housewives who don’t understand a thing about defense,” she recalls. “In the end, Barak’s reasons for the withdrawal from Lebanon were identical to their claims.”

In recent years, Oron has been taking part in many discussion groups with the Palestinian peace camp. She has the impression that meetings in which women participated were particularly successful. She notes that her impression is supported by scientific findings, which indicate that men “wish to defeat and win”’ while women “seek cooperation and agreement.”

“The exclusion of women from the diplomatic and defense arena results in monolithic group thinking on issues that require diversity and creativity and mars the quality of the decision-making process,” she complains. She contends that women are much more willing to listen and weigh additional options, which are not necessarily self-evident. “They are much more prone to ask what is at the root of this or that decision, for what purpose, and what will happen afterwards,” she explains.

Despite the situation described at the start of this piece, Oron signs off our interview in a somewhat optimistic tone: “In recent years we have witnessed a change in our male point of view. Today it is no longer legitimate to ask a candidate for a key defense or diplomatic positions ‘in which battle did you participate and where did you get a medal?’"

Akiva Eldar is a contributing writer for Al-Monitor’s Israel Pulse. He was formerly a senior columnist and editorial writer for Haaretz and also served as the Hebrew daily’s US bureau chief and diplomatic correspondent. His most recent book (with Idith Zertal), Lords of the Land, on the Jewish settlements, was on the best-seller list in Israel and has been translated into English, German and Arabic. In 2006, the Financial Times named him among the world’s most influential commentators.