Few, if any, Israeli parties are expected to present for the upcoming Nov. 1 elections Knesset lists with equal representation of women. 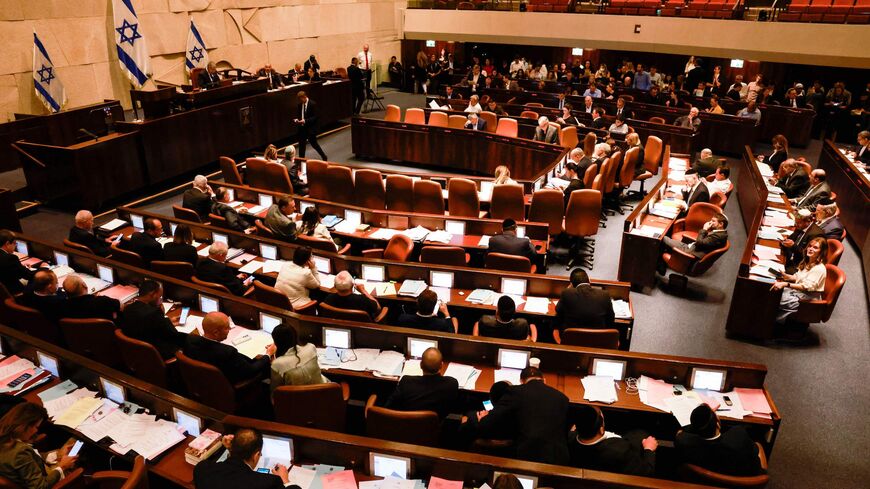 This picture shows a general view of the Israeli Knesset (parliament) during a meeting, in Jerusalem on June 30, 2022. - MENAHEM KAHANA/AFP via Getty Images

When the primary votes were counted last month and the Likud list of candidates was set, the blow sustained by women in Israel’s largest party became obvious to everyone. Only five women appeared in realistic slots (i.e., the first 32 seats, according to polls). What this means is that just over 16% of the list consists of women.

No less disturbing is the fact that only one woman appears in the party’s top 10 slots. This is the worst the situation has been since the 2015 election when only six women served in the Knesset for the Likud.

This is the party’s Achilles’ heel in the current election campaign. Both of its opponents — Prime Minister Yair Lapid’s Yesh Atid party and Defense Minister Benny Gantz’s National Unity party — immediately launched online campaigns in which they boast about the relatively high number of women in their parties, especially as compared to the Likud.

That being said, even here, the word “relatively” is important. It underscores the fact that even in these parties, the representation of women is hardly optimal.

Both Lapid and Gantz have been making sure that 40% of the candidates on their lists are women, though it should be noted that since they are the sole leaders of their respective parties. There is no internal mechanism like a primary to select the members of the list. Not only do they pick the names on the list. They also choose their placement on it. What this means is that they could have chosen to choose women to make up half the members of their list, or even to be trailblazers by creating a list in which women are the majority.

A quick glimpse at the broader right-wing ultra-Orthodox camp headed by opposition leader Benjamin Netanyahu shows that the situation is even worse.

The two ultra-Orthodox parties (Shas and United Torah Judaism), which are key members of the bloc, don’t include women in their lists at all. In contrast, the Religious Zionism party has three women in realistic slots among their first 10 candidates; but even then, of roughly 60 legislators in the right-wing ultra-Orthodox bloc, there will likely be fewer than 10 women.

If Netanyahu manages to put together a coalition with 61 members of the Knesset, Israel will have a record low number of women in the government and the coalition. While Netanyahu is aware of the situation, he refused to use the slots allotted to him to handpick candidates in order to fix the situation even somewhat.

While member states of the OECD (Organization for Economic Cooperation and Development) are making significant progress in the representation of women, data shows that Israel is way behind. A study of the situation was conducted by the Israeli Institute for Democracy last March in honor of International Women’s Day. Research Fellow and Professor Ofer King found that Israel has a record number of women in the Knesset and the government. Nevertheless, Israel is still ranked 61 out of 192 states for its representation of women and holds the 23rd spot among the OECD member states for its parliamentary representation of women.

According to the study, 35 women serve in the outgoing Knesset, making up 29% of the total number of parliamentarians. King notes that the sharp rise in the number of women elected to parliaments around the world is one of the most prominent phenomena of the last two decades, and not just in democratic countries. Up until 2003, there was only one country whose parliament consisted of more than 40% women, while there are 32 such states in the world today.

The dearth of women representatives in Israeli politics is painful, especially given the fact that women serve in top positions in the country’s economic, legal, scientific, high-tech and academic leadership. There has even been a marked improvement in the various groups that make up the defense establishment. More women now occupy positions that were once thought to be reserved for men.

Unlike other democratic nations, a woman has never served as Israel’s defense minister or finance minister, nor has any woman ever served as head of the Knesset’s prestigious Foreign Affairs and Defense Committee — or even the Finance Committee. These committees cover two issues in which women continue to be excluded in politics.

No woman has ever chaired the Constitution, Law and Justice Committee either, even though women served as justice ministers and as chief justices of the Supreme Court. Among these are the current chief justice, Esther Hayut. It is also worth noting that while one woman, Golda Meir, served as prime minister, even that was five decades ago.

There have been many discussions and debates over the years about the dearth of women in local and national politics in Israel. Generally, the conclusion is that the fact that politics is predominantly male-dominated is a kind of extension of Israel’s male-dominated military and “networking” in which one friend brings another friend along. Since security affairs are the leading issue in national politics, and generally always have the advantage of a public image in dealing with defense, they inevitably take top slots in government.

So, for example, former chief of staff Gadi Eizenkot was the person most courted by all the political parties over the last three years. All the parties tried to get him to join their list, and when he finally decided what to do, he chose to join a party led by another general: current Defense Minister and former chief of staff Benny Gantz. Eizenkot even noted that the fact that he and Gantz have known each other for the past 40 years was a significant factor in his decision.

This is apparently the reason why so few women have headed parties in Israel too. Today, there are three women who head parties, with two of them on the left: Minister of Transportation Merav Michaeli who heads the Labor Party, and Zehava Gal-On who heads Meretz. In both cases, these are very small parties. A third woman, Ayelet Shaked, now minister of the interior, heads the Zionist Spirit party, but most polls seem to show that it will not pass the electoral threshold.