Almost 50 years after her era, Golda Meir remains the only woman to have served as prime minister of Israel, but the clock is ticking. 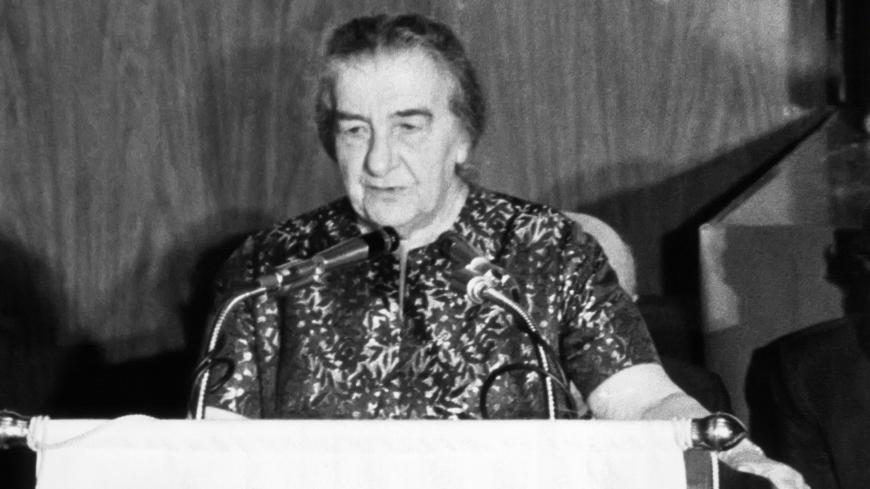 When the Labor Party’s Central Committee appointed Golda Meir to become prime minister of Israel on March 17, 1969, the gender aspect wasn’t highlighted. She was the first woman appointed to the position in Israel, replacing Levi Eshkol, who passed away, at a time when the country faced especially serious security challenges including the War of Attrition.

Almost 50 years have passed since then. While women have burst through many important barriers over the past few decades, especially in the judiciary, the economy and even the military, one question remains unanswered: Why hasn’t Israel’s political system produced another Golda?

The only woman who came close to becoming prime minister was Tzipi Livni in the 2009 election. As head of Kadima, she ran against Ehud Barak (Labor) and Benjamin Netanyahu (Likud). One thing that will always be remembered from that campaign was Barak’s dismissive and misogynistic attack on Livni, whom he called Tzipora, her full, old-fashioned first name, which means "bird." He challenged her ability to make important decisions concerning Israel’s defenses, claiming, “She can’t give answers, not at 3 o'clock in the morning, and not at 3 o'clock in the afternoon.”

It’s worth noting that Livni won the most votes in the election and an impressive 28 seats, while Barak’s Labor Party dropped to just 13 seats. It was proof that the Israeli electorate trusted Livni to lead the country in every way, including defense. Netanyahu, who won 27 seats, eventually formed the next government because of his successful efforts to put together a coalition. When the moment of truth arrived, the ultra-Orthodox preferred a right-wing man as their partner.

In the ensuing years, the representation of women in the Knesset has improved beyond recognition. With 34 women now serving in the legislature, they make up more than a quarter of all Knesset members. On the other hand, none of the female ministers (of which there are only four) are considered potential candidates for prime minister, and no woman is positioned to compete for the office in the foreseeable future.

The most senior and influential woman in the Knesset today is Justice Minister Ayelet Shaked, the second-ranking member of HaBayit HaYehudi. Last year, she announced that she sees herself competing for the office of prime minister at some point in the future after the chairman of her party, Naftali Bennett, completes a term in the position.

The question of whether a woman could be elected again was raised in a conference to mark the 120th anniversary of the birth of Meir, “the first Hebrew diplomat.” The event took place Feb. 19 at the Abba Eban Institute for International Diplomacy at the Herzliya Interdisciplinary Center.

Meir was a trailblazer ever since she was a young woman. In that sense, she was a product of her time. She was an integral part of the group of people who paved the way for the state in the making. In the pioneering era — before Israel was established and during its early years — women fought in the military. Women joined the pre-state underground groups and were later integrated in fighting positions in the 1948 War of Independence. Women were also equals in the kibbutz movement, working the land alongside men. It was a consequence of a real need for a larger workforce and for people to provide support for the troops in combat.

In an age when no one talked about “glass ceilings” or women's empowerment, Meir burst through barriers, perhaps without understanding how great her achievements were. When women in so many countries still did not have the right to vote, Meir was appointed foreign minister, a position she held for 10 years. She was a powerful woman in a world of men and a militaristic society, and it must have seemed to her the most natural thing in the world. It would take another 40 years before another woman, Livni, would serve as foreign minister.

What really makes Meir’s achievement so exceptional and fascinating is that while it was happening, no one around her or in the male-dominated leadership of the Labor Party doubted her ability to lead the country — except for the ultra-Orthodox, of course.

This was true until the Yom Kippur War fiasco in October 1973, for which Meir was one of those responsible. By the time she left the political stage, she was broken, despondent. The national trauma was the unfortunate closing chord in what was otherwise an exceptional career.

According to Gabriela Shalev, a former Israeli ambassador to the United Nations, since Meir was the only woman to serve in the position until then, the fiasco became a kind of barrier, preventing other women from assuming leadership positions and, ultimately, the prime minister’s office in the ensuing years. Notably, a woman has never served as Israel’s minister of defense or internal security.

“The trauma of the Yom Kippur War created the sense that with Israel in a state of military conflict, it cannot be a woman to pick up the phone at 3 a.m., certainly not in a nation dominated by generals and in which machismo is such a predominant trait. As a result of her crash after the Yom Kippur War, people still say that a woman cannot be defense minister, chief of staff or prime minister,” said Shalev, who participated in a panel discussion about women in leadership.

Nevertheless, the fact is that Livni received the most votes in the 2009 election, more than either Netanyahu or Barak. Israeli voters gave her their trust despite the collective memory of the Yom Kippur War. It is possible that the younger generation, which knows that war mostly through history books, found it easier to “rely” on a woman on security matters.

Dorit Beinisch, who also participated in the panel, was the first woman to serve as chief justice of the Supreme Court. She also believes that Meir’s achievement should be viewed from the perspective of that era. It was an extension of the role that women played in the Israeli pioneering movement, “a role that has diminished over the years.” With the establishment of the State of Israel, pioneering women disappeared from centers of male activity in what can only be described as a regressive process. In fact, shortly after the 1948 war, the army adopted a different policy, distancing women from all combat positions.

Still, it was that same army that in the past two decades has been leading a gender revolution. The Artillery Corps was the first to open its gates for women in combat positions, and since then, the number of female warriors keeps increasing. According to Israel Defense Forces data, the number of female fighters doubled between 2012 and 2014, and it has increased since then annually by 250%. For instance, the Caracal Infantry Battalion integrates male and female soldiers who all go through training together.

This army gender revolution is taking place alongside a similar societal revolution in the business and economics world. And it is this gender revolution that could bring about the next Golda Meir. This next female premier could emerge from within the security establishment, and no one could tell such a premier — a former fighter — that she can’t give answers at 3 o’clock in the morning.