The former education minister and Israel Prize laureate, Shulamit Aloni, was the grand dame of civil rights, and above all a pioneer in the fight for women’s rights in Israel's male-dominated, militaristic environment. 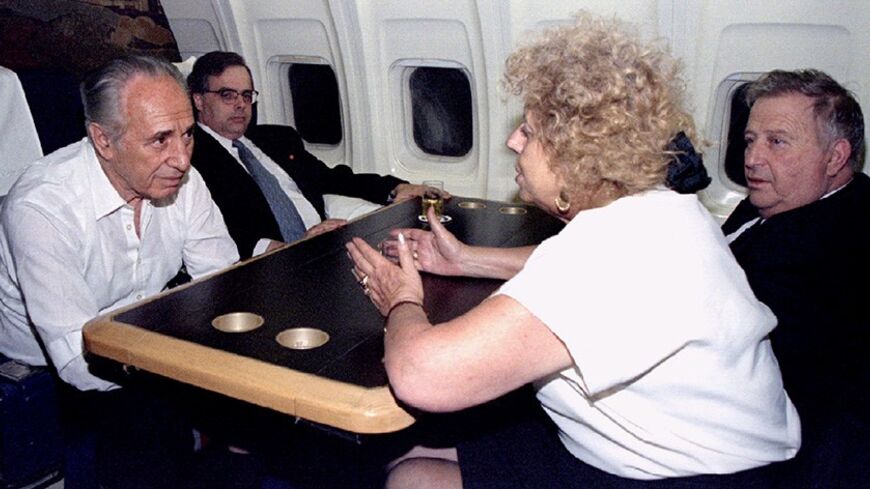 At one of the peak moments of their mutual loathing, the late Prime Minister Golda Meir spat out at late minister Shulamit Aloni: “Here we don’t say, 'I think.' Here we say, 'We think.'” This oft-quoted reprimand defines concisely and precisely the essence of Aloni, an individualistic woman who was the mirror image of many female and male politicians over the years.

It’s hard to think of two more different women. They were born 30 years apart, but it wasn’t just age that separated them. It was a whole world view, a true chasm of ideas. Meir was the first and only woman to serve as prime minister in the State of Israel, but she never pretended to be a symbol of the struggle for gender equality. It’s highly doubtful that she even understood the feminist idea. Unlike her, Aloni was a self-professed fighter for women’s rights in the days when politicians in Israel didn’t even know how to pronounce these two words.

Former Education Minister Yossi Sarid, who inherited Aloni’s position as chairman of the Meretz Party, excels, as is his wont, in defining the difference between these two giants of Israeli politics on this issue. “While Shula talked of women’s status in society, Golda thought this wasn’t an issue because the fact was that she was a prime minister,” he said in a conversation on the morning of Jan. 24, when Aloni’s death was announced.

Sarid, currently a columnist for the Israeli daily Haaretz, still remembers the enmity between the two, which eventually led Aloni to spread her wings, leave the Mapai Party (the mother party of Israeli Labor) and establish a party of her own, that engraved on its political banner what were revolutionary ideas at the time, such as human and civil rights. “Golda didn’t just object to her, she didn’t understand what she wanted of her,” he said.

Aloni was born in Tel Aviv in 1928 and served in the Palmach, the pre-state elite fighting unit of the underground movement. She was a fighter with all her being. Of all the struggles she led, among them over civil, human and religious rights, her fight for gender equality was particularly notable. She was considered a pioneer in this regard, particularly because she grew up in a male-dominated, militaristic and often nationalistic environment. This climate was an assembly line for women of a certain kind, who adopted male codes when they went into politics and did not regard themselves as emissaries of a feminist struggle, which in any case was in its very early days. Aloni charted the course for many women politicians who came in her wake, even if they did not identify with her or her beliefs and struggles, and didn’t know they had made it thanks to her.

This struggle of hers should not be taken for granted. Aloni rose up against the conventions of her time, protesting and talking back, and was not only the first woman in politics to establish a party, but the only one whose left-wing party became a strong, successful and kicking political and public brand. In fact, Aloni turned Meretz into a haven for the hard-core left wing in the days when Mapai, followed by the Ma’arach (Alignment) and Labor, veered toward the center, changed agendas and joined right-wing governments. Aloni was always a compass. At its height, Meretz won 12 seats in the Knesset and Aloni served as minister of education in the second government of late Prime Minister Yitzhak Rabin. This achievement was never replicated.

According to the well-worn narrative, Sarid challenged her leadership when he ran for the position of Meretz chairman in 1996. Aloni decided not to run against him and opted for the position of observer and social whip. “I don’t tend to have regrets, but if there’s one thing that I’m more than sorry for is that my name has been tied up in her departure from politics,” Sarid said. “In her lifetime, I didn’t see it fit to correct history, but the story is totally different. She may have been angry at me. Eventually, we ironed out difficulties, to extent that there were any, and we were friends and on very good terms. We encouraged each other at moments of national crisis, at times when everything seemed dark. She would call up, outraged, and say we should speak out and write. She was very involved.”

Al-Monitor:  And what kind of politician was she?

Sarid:  That’s a question that’s hard to answer. If a politician is someone who can survive at all costs and be liked at every opportunity, then one can say she was a bad politician. But she was always very frank and said what she thought was right to say, and she was godless, in more than one sense. Some would say that in that sense, she wasn’t a good politician. But I don’t know many people who have sufficient courage and integrity to establish a movement of their own, which was successful in two aspects: both electorally and in making an impact on Israeli society. Her electoral achievement was much more significant than those of [first Israeli Prime Minister David] Ben Gurion and [former President] Ezer Weizman, both of whom founded political parties.

And in fact, in a political system in which parties rise and fall at the drop of a hat, such as the big Kadima Party established by late Prime Minister Ariel Sharon, the Shinui Party established by the late minister Tommy Lapid, the Merkaz (Center) Party, Tzomet, HaDerech HaShlishit (The Third Way) — Aloni’s achievement is tremendous. She left behind a clear legacy and an influential political platform that’s alive and kicking.

But Shulamit Aloni was also the “enfant terrible” of politics, the “serial troublemaker” — even before we knew these expressions. An independent and original thinker, she was the exact opposite of the “we think” and “we decide” Mapai-style collective. Israeli historic memory is laden with her controversial statements about military officers, prime ministers and the ultra-Orthodox political leadership. She compared the ultra-Orthodox Shas Party to the Nazi regime on more than one occasion. She thought former army chief of staff Dan Halutz should be put on trial for ethics violations during the second Lebanon war. She stirred up the political system and was lambasted, in return. The late Shas leader, Rabbi Ovadia Yosef, declared that a feast should be held on the day she dies.

Al-Monitor:  I apologize in advance for the cliche, but what is your memory of her that best represents her pugnacity as a woman in politics, which wasn’t just dominated by men but was male in its essence?

Sarid:  I remember an event in 1965. She was then still in the Ma’arch [the predecessor of the Labor Party] and I was an adviser to Prime Minister Levi Eshkol, whom I loved and admired greatly. I found myself in the middle of a conversation between him and her. There was an issue of whether she would make it into the Knesset or not, because in those days the decision regarding the Knesset slate was made by a committee, and she was being pushed aside. She said to him: "Until now, I made an effort to get Dvora Netzer [a Mapai Party Knesset member who was much older than Aloni] into the Knesset. Now Dvora has to make an effort to get me in." And this surprised me. For me, it was an innovation. Almost 50 years have gone by and I still remember it, because who would have dared talk back to the prime minister? It was very nice, the way she said it to him.

Aloni’s words to Eshkol appear to have made an impression on him. She made it into the Knesset and wrote one of the grandest chapters written by a woman in the annals of Israeli politics.