By deciding to join the Netanyahu-Gantz government, Labor Party Chairman Amir Peretz put the final nail in the coffin of the party that founded the State of Israel. 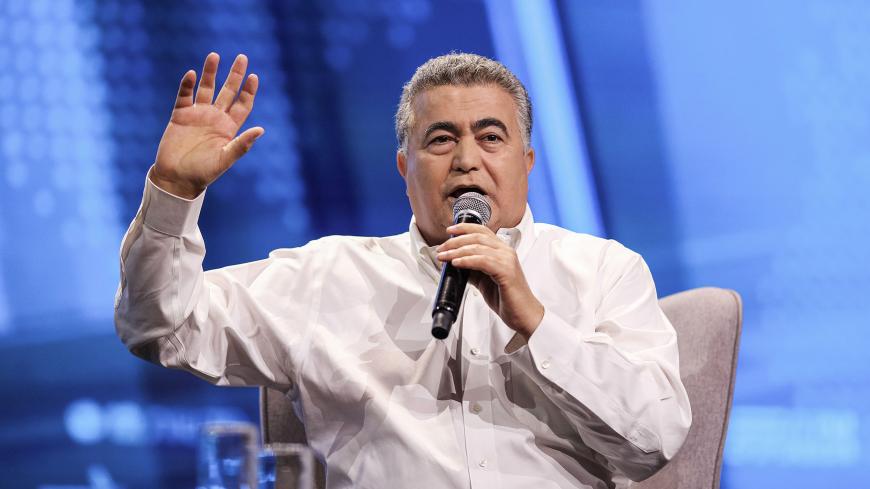 A process that will likely bring an end to Israel’s Labor Party concluded on March 30. For the moment, Labor has only three members in the current Knesset — Chairman Amir Peretz, Itzik Shmuli and Merav Michaeli — and various reports indicate that Peretz and Shmuli have reached an agreement with Blue and White Chair Benny Gantz to join the Netanyahu-Gantz government. In exchange, they will probably receive the economic and welfare portfolios.

Before the September 2019 election, Peretz swore to voters that he would never participate in a government led by Benjamin Netanyahu. As if to prove his seriousness, he performed the circus-like act, which he considered “humorous,” of shaving off his trademark bushy mustache. He announced to the nation, “That mustache has been with me for 47 years, ever since I was a young armaments officer in the 890th Brigade. After consulting with family over the last few days, I decided to remove my mustache. I called a barber to come to my house, in the hope that the removal of my mustache will be accompanied by the removal of the cloud overshadowing the Labor-Gesher party. I want it to be clear to everyone: I will not join a Netanyahu government. Period.”

Gantz’s decision to join a unity (or emergency) government with Netanyahu, and thus fracture his party, is somewhat defensible. It can be argued that he did not want to put Israel through a fourth round of elections within a year. But what excuse does Peretz have? The coronavirus government will be formed with or without him. There is no real need for him to “act on behalf of the people” by joining it.

Michaeli, unlike her two fellow party members, decided not to be part of a Netanyahu-Gantz government. In a letter to Peretz she wrote, “No one knows as well as you that you cannot join a coalition without the approval of the party’s governing institutions. Even if the party decides to break its promise to its voters, that is not a decision that the party’s Knesset members can make on their own.” On the other hand, Michaeli also knows that the die has been cast.

The Labor Party, based on the historic Mapai, was the ideological home of the nation’s founders, including David Ben-Gurion, Moshe Sharett, Golda Meir, Shimon Peres and Yitzhak Rabin. Now that party is dead, and it passed without as much as a whimper, in exchange for two relatively minor portfolios. It is a pathetic ending for a party that played such an important role in Israel’s history.

There are those who claim that the Labor Party's historic role came to a close with Rabin's assassination, in 1995, and Netanyahu's subsequent election, in 1996. This resulted in the de-legitimization of Rabin’s legacy, not to mention the Oslo Accords. What Peretz’s defection represents is the end of a Zionist, nationalist left based on values envisioning two states for two peoples. Peretz is an ideologue. He sincerely believes in the ideal of a two-state solution. Labor Party voters did not need the embarrassing antics involving his mustache, because they believed in the political path he had advocated over the past four decades.

For instance, in December 2015 Peretz released a three-part diplomatic plan. “A two-state solution is possible,” he said. “We need to want it, but we also need to implement it cautiously, while at the same time acting boldly and candidly. With all supporters of peace working together, we can bring about an end to the conflict and see better days for all of us.”

After the annual memorial for Rabin in November 2019, Peretz said in a radio interview, “It is obvious to everyone that Rabin was killed while he was chairman of the Labor Party. What this means is that I now have responsibility for his legacy. Our activities in [Rabin] Square and my call to everyone to attend are a testament to what is really important, i.e., perpetuating the memory of Yitzhak Rabin and talking about his legacy, which includes the Oslo Accords.”

By abandoning the peace camp, Peretz also left the Zionist left-wing Meretz battered and bruised. Meretz, party of the late leading leftists Shulamit Aloni and Yossi Sarid, had already lost most of its voters. Concerned that it would be wiped off the political map entirely, it ran with Labor-Gesher in March. Now the party has been cast into the political wilderness. It has no leadership and apparently not much of a vision either. Most of its supporters abandoned its dream of achieving peace with the Palestinians, so the vision now seems hopeless. To make matters worse, this all happened overnight. Netanyahu won because left-wing supporters of the peace camp were never so lost, divided and helpless.

Right now, there is only one party still advocating optimistically for a sustainable peace with the Palestinians: the Joint List. When the results of the last election were released, and it looked like the right-wing/ultra-Orthodox bloc had won, Joint List Chairman Ayman Odeh attempted to console left-wing voters who still believed in the promise of peace, telling them that he and his fellow party members now lead the real left. “I call on the left not to give up hope or even take account of themselves,” Odeh remarked. “I call on them to think about partnership and an alternative based on principles, rather than some imaginary alternative. This alternative would be based on the values of real peace, real democracy, real equality between the Jewish and Arab residents of the country, and social justice for all the disempowered and disenfranchised.”

In the last election, Ahmad Tibi, chairman of the Joint List’s Ta’al faction, was able to convince Jewish voters to cast their ballots for the party, asserting, “We are the true left.” Tibi, Odeh, and the other members of the Joint List are now worried that a Netanyahu-Gantz government will forge ahead with the annexation of the Jordan Valley. After all, both men agree that the territory should be annexed. The debate between them revolves around the timing and whether they need President Donald Trump’s approval for the move. The Joint List claims that a Netanyahu-Gantz government with Peretz as its newest member would not only ensure that Netanyahu gains immunity, but would also be an annexationist government, effectively putting an end to the dream of one day achieving peace.

Can Meretz lead the shattered remains of the Israeli left? Alternatively, could it become part of some new Jewish-Arab partnership? Meretz Knesset member Yair Golan tweeted in frustration, “I am also disappointed with the people I thought were my partners and am still digesting the news that they went crawling to Netanyahu’s embrace. I also think about what lies ahead. It will take a lot of time and effort before we are able to rehabilitate the left, but I promise you that I am more devoted than ever to achieving this. Together, we will build hope.”

Nevertheless, Meretz cannot ignore that it pushed Issawi Freij, its only Arab Knesset member, to an unrealistic spot on the Labor-Gesher-Meretz list while agreeing to give Orly Levy-Abekasis the number two spot. By doing so, it abandoned the key principles of the left. It will likely pay a price for that.