The Knesset race is painting a sad picture of gender equality in Israel, with no party led by a woman. 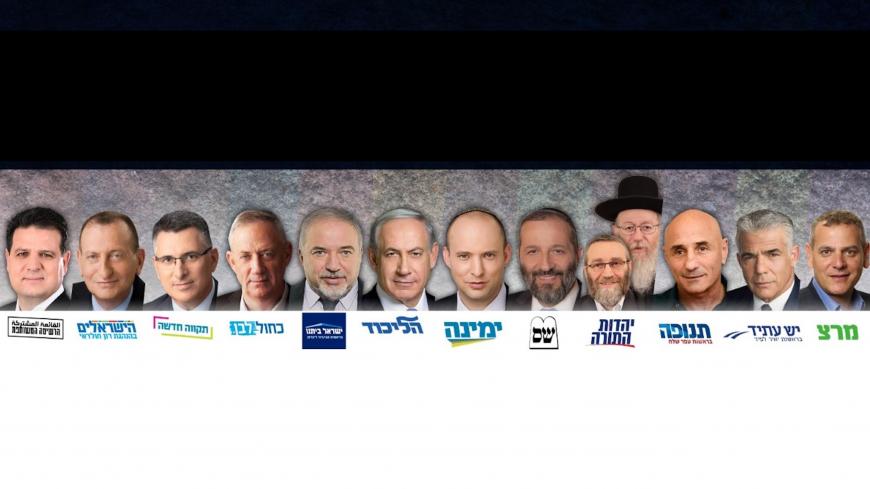 The heads of the Israeli parties that will run in the upcoming elections are shown together in this graphic published Jan. 10. - Knesset TV

It’s now clear that the March 2021 election in Israel is bad news for women’s representation in Israeli politics.

After a year when the coronavirus put the civic, health and economic crisis front and center and women leaders around the world like New Zealand’s prime minister rose to prominence, in Israel no woman stands at the head of any political party, large or small. Lists of candidates for the 24th Knesset must be submitted by Feb. 4, but as of now there is no party headed by a woman.

Every day new parties spring from divisions, especially on the center left, all of them led by men. On Jan. 2, former chief of staff Moshe Yaalon established a new party to vie for the center-left votes. He joins other men who broke off from larger parties such as Ofer Shelah, who also left Lapid’s Yesh Atid, a camp that historically put women center stage and was once led by Israel's only woman prime minister.

On the right among the ultra-Orthodox and on the left among the Arab parties, there’s nothing to speak of at all. The New Hope is led like all the others by a man, Gideon Saar, who left the Likud.

In a gallery of the party leaders who are running in the March 2021 election, there only men’s faces. The picture is worth a thousand words, showing that women in Israel have succeeded in breaking glass ceilings in finance and the legal system, but not in politics. Judge Esther Hayot leads the Supreme Court today, and other women head the big banks. Women are prominent in the high-tech and business worlds, but in politics they haven’t managed to become decision-makers on a national level.

Only eight years ago, in the 2013 election, three of Israel's significant political parties were led by women: Shelly Yachimovich headed Labor, Tzipi Livni headed HaTenuah and Zehava Gal-On led Meretz. Together they led a parliamentary force of nearly a quarter of the Knesset's members. Today, none of them is politically active.

Going back further to the 2009 election, a woman stood at the head of the largest party in Israel and vied head-to-head against Prime Minister Benjamin Netanyahu. Livni, the former foreign minister, led Kadima to a huge achievement: 28 mandates in the election, one more than Netanyahu. While she didn’t succeed in forming a government, there’s no doubt she broke a glass ceiling in politics and many Israelis expressed faith in her ability to lead a complex country like Israel, with its security challenges and the existential threats.

It was an excellent year for women in Israel, for women in politics and for Israeli society in breaking gender barriers. Livni was compared to the only female prime minister to serve in Israel: the 1970s' Golda Meir. Many saw Livni as Meir's heir, a woman who could fight for her place. Livni got the closest of any woman candidate to serving as prime minister of Israel in the past 50 years. Today no woman is close to such an accomplishment and the field is empty.

Another woman who was discussed as a possible prime minister is former Justice Minister Ayelet Shaked, who once headed Yamina but despite her popularity failed to reach the mandate threshold. Naftali Bennett took over the party.

Thus, while representation of women in the Knesset has grown in recent years, particularly on the lists of parties that don’t hold primaries, they have not succeeded in taking center stage. In the current Knesset there are 30 women, an all-time high. But that number doesn’t translate to real influence. Not only are there no women in senior positions around the government table, they are pushed to the margins in positions within the parliament. No woman has ever chaired any of the three permanent Knesset committees — the finance committee, the foreign affairs and security committee or the constitution, law and justice committee. No woman has ever served as finance or defense minister.

While the incoming US administration is going to break records for women’s representation in the most senior positions, including vice president, Israel is moving backward. It’s due to more than the influence of the ultra-Orthodox or security challenges. There seems to be another dynamic that is perhaps tied to the long and powerful reign of Netanyahu and the perception is that only a man could bring him down. The fight to replace him is aggressive and borrows heavily from the worlds of warfare and battle, which continue to dominate the political arena.