Israeli Justice Minister Ayelet Shaked has been a popular Cabinet member, but as a woman in a small, right-wing religious party, she has many obstacles to overcome on her way to the prime minister’s office. 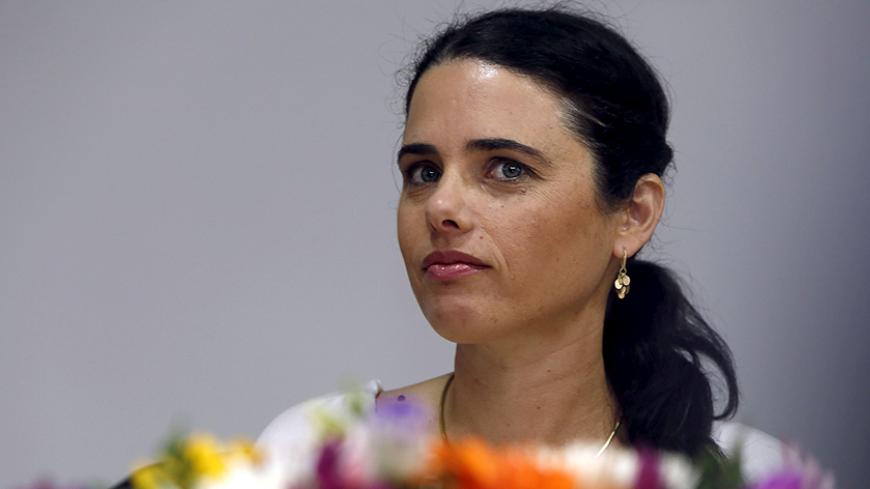 Justice Minister Ayelet Shaked of the far-right HaBayit HaYehudi attends a ceremony at the Justice Ministry in Jerusalem, May 17, 2015. - REUTERS/Gali Tibbon

Israel's Justice Minister Ayelet Shaked felt confident enough to make no apologies as she announced that she sees herself running for prime minister one day — after the chairman of HaBayit HaYehudi, Education Minister Naftali Bennett, does so first, of course.

Shaked made her remarks March 6 at a gathering ahead of International Women's Day. She was quoted extensively in the media, not only because she revealed her political ambitions, but also because of her underlying assumption that Bennett will be the next prime minister, succeeding Benjamin Netanyahu.

The media's focus on the possibility that Shaked would one day be elected prime minister received even greater momentum from poll results released March 8 to mark International Women's Day by the website Walla! The poll asked which female politician is best suited to serve as prime minister. First place in the poll, which covered all Israelis (Jews and Arabs alike), was taken by Tzipi Livni, the Zionist Camp co-leader who heads the Hatnua Party and previously served as foreign minister. Shaked came in second (with 13% to Livni's 18%), but came in first among just Jewish respondents (17% to Livni's 14%).

There can be no doubt that this is an impressive achievement for the relatively young politician, who is 40. Even people who oppose her conservative views and her efforts to implement her positions in the legal system are forced to admit that she is made of leadership material.

Another sign of Shaked’s popularity was registered with a flattering interview she gave March 7 on Rafi Reshef's show on Channel 10, right in the middle of secular, left-wing Israel's prime time.

There can be no doubt that Shaked is the most prominent and intriguing female politician in Israel today. She is now what Livni was a decade ago, when Livni was elected to head the (now practically inactive) Kadima Party, and later, in the 2009 election, when Livni came very close to becoming prime minister. In fact, no woman has come as close to the position as Livni since Golda Meir was prime minister in the early 1970s. What Livni and Meir have in common is that they both headed a center-left party.

Unlike them, however, Shaked has two glass ceilings to break through on her way to the Prime Minister's Office. She is active in a sectoral right-wing nationalist party, meaning that her chances of reaching the top position in Israeli politics are slim at best. Add to this that she is a secular woman in a male-dominated environment guided by religious principles. In this context, it is worth noting that no woman has ever headed the Likud, Israel's largest right-wing party.

Parallel to the International Woman’s day events, Shaked was forced to keep a low profile this week, as the country dealt with the story of Rabbi Yigal Levinstein. The rabbi insulted countless women in a blunt speech he gave opposing the integration of women as combat troops in the Israel Defense Forces. Levinstein and his supporters are closely identified with HaBayit HaYehudi, so Shaked was in no rush to speak out against him. Given the politics, this was understandable. What was surprising was the fact that the media did not make her life difficult because of it.

Ostensibly, Shaked has managed to break through the glass ceiling in HaBayit HaYehudi. She made history when she was the first woman to take the No. 1 slot in the party's primaries for its Knesset list, right before the 2015 election. She defeated male candidates who were much better known and more admired in the religious nationalist milieu, as well as veteran party members. Most of all, she did it quite easily at that.

After the election, Shaked was appointed to the senior position of justice minister. That would be an impressive post for any politician, and all the more so for a secular woman in a religious party. She took naturally to this lofty position, and received considerable praise for her performance from among her own party. Shaked may be a secular woman from Tel Aviv, but within a short time she came to be admired by the religious nationalist sector. No one questions her talents, her close relationship to Bennett and her enormous role in transforming a party on the verge of disappearing from the political map into a rising, proud and unapologetic force in right-wing politics.

In Shaked's case, the most relevant question is whether it is even possible for a secular woman to head a religious nationalist party. At the March 6 conference, the justice minister said, "In 2012, Bennett and I decided to join HaBayit HaYehudi. I was a member of the Likud at the time, and people asked me, 'Are you mad? You're a woman, and you're not even religious. What are your chances of being elected? No one will vote for you. You are committing [political] suicide.'"

It is true that Shaked's quick rise through the ranks to the leadership of right-wing religious politics was nothing short of a revolution. On the other hand, the likelihood of her being elected prime minister from a sectoral party identified with the far right is absolutely minuscule, at least at this stage.

Shaked never planned for a political career in a religious party. Just a decade ago, she managed Netanyahu's office when he led the opposition. She was 30 at the time, and working as an engineer in a high-tech company. She was also married to an Air Force pilot, and the mother of two children. Shaked went on to bring Bennett into Netanyahu's office as his chief of staff. The two of them left a short time later, after getting into a bitter quarrel with Netanyahu's wife, Sara. It is a quarrel that continues to this day. This prevented Bennett and Shaked from rising through the ranks of the Likud, so the two of them established the My Israel movement, a popular, extra-parliamentary right-wing group, and later took over HaBayit HaYehudi.

Meanwhile, things are going exceptionally well for the justice minister. She won a big victory in the fight over the appointment of new justices for the Supreme Court (including two justices identified with the national religious sector). Smartly and cunningly, she bent the legal system to her will. In keeping with her characteristic focus, she managed to get what she wanted, winning the praise of her political base.

Shaked has succeeded in dancing between the raindrops, skillfully balancing her image as a feminist and support from the rabbis of HaBayit HaYehudi. It would be safe to assume that she will be confronted with even more challenges as she gets closer to shattering one glass ceiling after another. If she is really to break through, she will have to use all her considerable talent, along with that same hefty dose of cunning.