Defense Minister Avigdor Liberman has revoked the entry permit of Mohammed Madani, who was appointed by Palestinian President Mahmoud Abbas to organize dialogues with Israelis to promote peace. 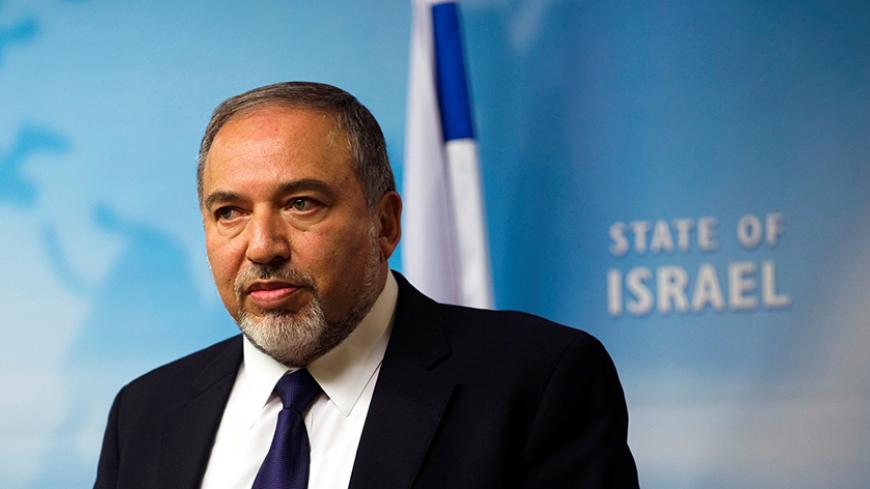 Israel's then Foreign Minister Avigdor Liberman gives a statement to the media at his Jerusalem office, Dec. 2, 2014. - REUTERS/Ronen Zvulun

Mayors from northern Israel met with Palestinian President Mahmoud Abbas at the Muqata in Ramallah on May 31. As reported in Al-Monitor, the gathering was organized and coordinated by the Committee for Interaction with Israel, headed by Mohammed Madani. At that meeting, which took place almost concurrently as Avigdor Liberman’s swearing-in as defense minister, Abbas surprised the participants when he said he was willing to meet with Liberman. The mayor of Ma’alot, Shlomo Bohbot, one of the Israeli organizers of the meeting, encouraged Abbas, telling him that Liberman is a far more pragmatic person than he is portrayed in the media.

Is Liberman really pragmatic? On June 15, Liberman ordered the revocation of Madani’s entry permit into Israel on the grounds that he had promoted subversion in Israel, attempted to intervene in its internal affairs and had even tried to establish a political party. The revocation of Madani’s entry permit means the muzzling of the committee that was created at the instruction of Abbas to establish a dialogue with Israeli society and convey the message that the Palestinian Authority seeks peace and does not engage in incitement and warmongering, as the Netanyahu government depicts it.

“I would be very glad to meet with our minister of defense, who has good intentions, in order to convince him that if we really want peace, dialogue is the way to get there,” Bohbot told Al-Monitor in response to Liberman’s order. “I know one thing,” Bohbot added. “If you close up a hole, water will get through another way. The decision [by Liberman] will force those who are interested in holding a dialogue [with the Palestinians] to do so abroad. So why not do it in Israel? All I’ve said assumes that we [in Israel] want to make peace. If we don’t want to, it’s a different story.” Bohbot also related that some members of the Knesset and mayors hold meetings with Palestinians abroad out of fear or embarrassment.

Ayelet Harel of the Women Wage Peace movement told Al-Monitor that she had met with members of Madani’s committee a number of times. “In all of the conversations I attended,” she said, “the committee members presented the audience with the Palestinian narrative for solving the conflict. There is someone to talk to today.”

Harel further said that in response to the recent wave of terror, her movement is organizing a women’s march for peace to go throughout the country calling on the government to advance a diplomatic process. According to her, members of the Palestinian committee relayed a message to Palestinian women that “even though we are an Israeli organization, our initiative is welcome and advised them to participate in the peace march. I can’t seem to understand why Israel is trying to damage the activity of the committee,” said Harel.

The interaction committee was created in December 2012, after Palestine was granted nonmember observer state status at the United Nations. After the Netanyahu government portrayed the Palestinians' application to the United Nations as a hostile act, the Palestinian leadership sought to convey a conciliatory message to Israelis by means of the committee. Abbas extended a hand of peace to the Israel public, and the application to the United Nations was made after he became convinced that the Netanyahu government was not interested in holding a diplomatic process. The man chosen to head the committee was Madani.

In an interview with Gal Berger on Kol Israel in February 2014, Madani related that he had been chosen for the post because of his support for dialogue with Israelis since the 1970s. In those days, he was close to Palestine Liberation Organization Chairman Yasser Arafat, and it was forbidden to say the word “peace.”

Madani said that his family fled from the village of Kafr Sabt, in the Lower Galilee, to Lebanon in 1948. His brother was killed in a battle with the Haganah, and when his father found his son’s body, he had a heart attack and died. “Despite this difficult family story that we have carried all these years, I am a peace-seeking man,” he said at the time.

This week, following the revocation of his entry permit to Israel, Madani told Al-Monitor that Abbas had called to offer him encouragement. Madani stated, “‘Despite the obstacles Israel is trying to put up,’ Abbas told me, ‘we have to continue conveying the message to the Israeli public that we want peace.’ If talk of peace and of building a better future for our children and for Israeli children is a threat, what can I add? What threat do we pose to the State of Israel?”

Madani adamantly denies the claim that he tried to establish a political party in Israel. “We have never thought of, never planned and never tried to establish a party in Israel,” he said. “We even oppose the militant voices of some Israeli Arabs, members of the Northern Branch of the Islamic Movement. When the recent wave of terror broke out, we told them, ‘This isn’t your concern. You’re Israeli Arabs, what does this have to do with you? Don’t get involved.’”

Madani emphasized that all the meetings between Palestinians and Israelis had been open. “Nothing was done in secret or under cover of darkness,” he said. “Since the committee was created, its members were invited to meet with mayors, at academic institutions, at kibbutzim and house parties. ​We talk peace and say that Mahmoud Abbas is interested in peace with 1967 borders. Israelis don’t know this, and we want them to know it. We’ve met Israelis from all sectors — right wing and left wing, religious and secular, and even new immigrants from the former Soviet Union, whom Liberman purports to represent [as head of Yisrael Beitenu, a party that includes many such immigrants]. In these meetings, we discovered that the Israeli public knows absolutely nothing about the Palestinians, who live only 40 minutes from Tel Aviv.”

According to Madani, what is said in the meetings between Palestinians and Israelis is passed on to the Israeli security establishment. In view of Liberman’s order, it is doubtful whether these voices of peace will reach the public in Israel. A senior source at the Defense Ministry made the case to journalists that, in addition to the revocation of Madani's entry permit, that is the primary obstacle to peace.