Palestinians say the benefits and punishments plan introduced by Israeli Defense Minister Avigdor Liberman is doomed to fail because it seeks to replace President Mahmoud Abbas with other leading Palestinians. 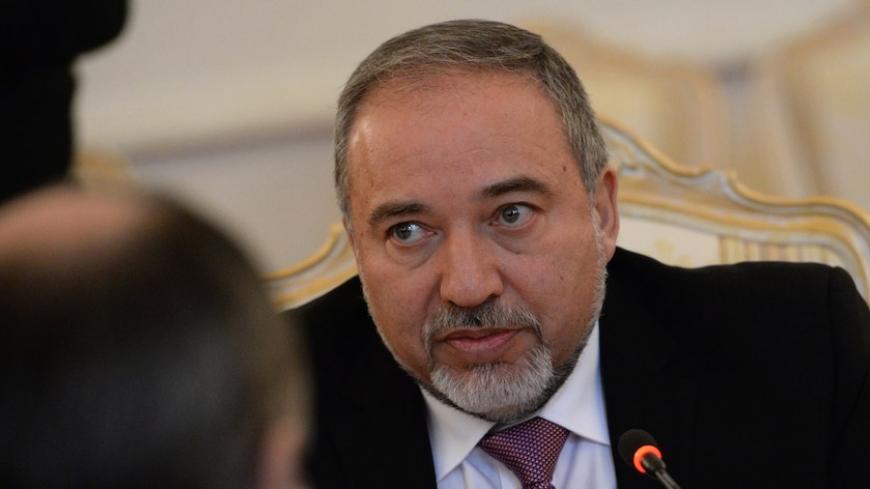 Defense Minister Avigdor Liberman unveiled on Aug. 17 what was described as a plan to contend with Palestinian terrorism. The two main points that Liberman presented to the press were the need to find an alternative civilian leadership to replace Palestinian President Mahmoud Abbas and the mapping of towns and villages throughout the West Bank as “red” and “green.” Regions from which no terrorist activities are launched will be colored green on a map hanging in the Defense Ministry and earn various benefits and an easing of restrictions. Regions from which terrorists originate will be colored red, and security measures will be leveled against them.

While it is unclear whether residents of the “red” areas will be denied permits to work in Israel, it's already known that green areas will be rewarded with the expansion of their development plans. Furthermore, an economic corridor linking Jericho and Jordan will be established, an industrial zone will be built west of Nablus, a hospital will be constructed in Beit Sahour, east of Bethlehem, and playgrounds and soccer fields will be created in Samaria.

The Defense Minister’s plan completely ignores the tight security cooperation between the Israeli security apparatus he heads and Palestinian security forces under Abbas — forces that have been effective in maintaining calm and preventing the outbreak of another widespread intifada in the West Bank. Abbas, whom Liberman is currently trying to go around, actually described in 2014 this security collaboration between Israel and the Palestinians as “sacred.” As far as Liberman is concerned, it's convenient to conceal this important information from the public, thus proving that ''there is no one to talk to'' on the Palestinian side.

One of the first things Liberman did upon being appointed defense minister was to deny Mohammed Madani, the chairman of the Palestinian Committee for Interaction with Israel, his special entrance permit to Israel. The move was intended to prevent Madani from addressing Israeli groups about the Palestinians’ desire to reach a diplomatic accord with Israel.

“We heard about Liberman’s delusionary plan,” Madani told Al-Monitor. “In fact, we all cracked up when we first heard about it.” He said the Palestinian leadership, which is now busy organizing elections for the local authorities that are scheduled to take place Oct. 8, hasn’t dealt with the Israeli defense minister’s plan in any way whatsoever, and if it did come up, it was only as the butt of jokes. “But if I may get serious for a moment,” Madani added, “you Israelis have to decide if you really want to talk peace and resolve the conflict, or if you want to keep it going forever. What the Israel public needs to know is that once the Abbas era is over, things will get much more complicated. It will be harder [to reach an agreement], because whoever comes after him will have a hard time making bold decisions.”

He went on to note that desperation and despair among the Palestinians have an enormous impact on what shape their society takes, and that radical Islamic approaches and ideologies, like those of the Islamic State, could emerge and spread throughout the territories in the future. “Is that what you want?” he asked.

Liberman isn’t the first Israeli leader to try to find an alternative to the existing Palestinian leadership. As far back as the 1991 Madrid conference, Israeli Prime Minister Yitzhak Shamir made Israel’s participation conditional on there being no negotiations with Palestinian representatives with ties to the PLO. The head of the Palestinian delegation to these talks ended up being Haidar Abdel Shafi, who was a close friend of PLO leader Yasser Arafat.

After the talks, Abdel Shafi returned to the Gaza Strip. Although there was no immediate outcome to these negotiations, they were the first step in the series of contacts that led to the 1993 Oslo Accord. In Gaza, Abdel Shafi was greeted with a mass welcome rally. I was there as hundreds of thousands of local residents celebrated his return and carried him on their shoulders. Thousands of people waved Palestinian flags and pictures of Arafat outside Abdel Shafi’s home in Gaza’s Rimal neighborhood, carrying olive branches (a symbol of peace). No one thought for a moment that Abdel Shafi sat down to negotiate with the Israeli team in Madrid while representing only himself. It was obvious to everyone that he was a member of the PLO, an organization that described itself as the sole representative of the Palestinian people.

The Palestinian delegation to the Madrid conference also included Saeb Erekat, who was later appointed by Abbas to head the Palestinian negotiating team.

One senior member of Fatah told Al-Monitor on condition of anonymity that as of now, not a single Palestinian would dare to have direct contact with Liberman. Furthermore, if anyone did that, they would immediately be considered a traitor, whether it was a businessman or an academic, the very people Liberman described as the ideal “target” for his initiative. “I’m not saying that as a threat. I am not saying that to intimidate anyone. I also don’t think that there will be anyone willing to speak to Liberman directly, if that means circumventing the elected Palestinian leadership. Imagine how you would be treated if you tried to establish ties with the Palestinian leadership if that meant going around your own government,” said the source.

Even if there are Palestinian businessmen, academics or mayors of “green” towns and villages who are willing to speak to Liberman directly, what power will they have? How much influence will they have? Are any of them capable of advancing any significant movement within the Palestinian Authority (PA)?

The defense minister is trying to promote a leadership alternative to Abbas based on the working assumption that the current Palestinian leadership does not represent the Palestinian people and is acting in its own interests. He is certainly basing this assumption on polls showing that the Palestinian president and senior Fatah members do not have widespread support among the Palestinian public and that more and more people in the PA have called upon Abbas to resign. The problem is that Liberman is misinterpreting the data. The frustration among the Palestinian public with Fatah in general and Abbas in particular is largely due to the simple fact that they failed to keep their promise to bring about peace with Israel and an economic boom in its wake.

As far as the Palestinian public is concerned, PA leaders — and especially Fatah members — have served as tools in the hands of Israel. Any leadership alternative to emerge in the future, be it the Hamas movement or another grass-roots leadership that will develop as a counter-reaction to the traditional Palestinian movement, will have to treat Israel with an iron fist.

Liberman’s attempt to replace Abbas could result in a new government led by Hamas, the very organization that he promised to bring down. Worse than that, it could lead to even more extreme forces taking control of the PA.