For former Fatah senior member Mohammed Dahlan, a combination of Israeli Defense Minister Avigdor Liberman’s land-swap plan with the integrity of the 2002 Arab Peace Initiative could open up negotiations for an Israeli-Palestinian arrangement. 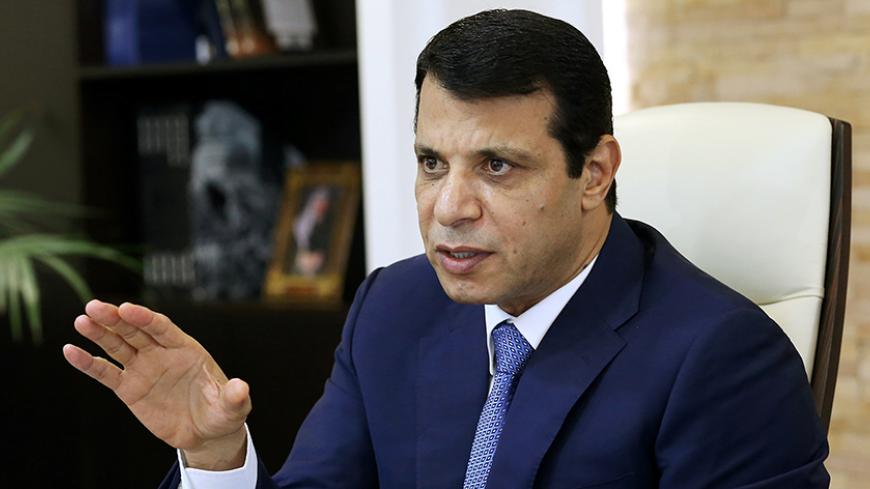 US President Donald Trump and Palestinian President Mahmoud Abbas finally spoke on the phone March 10. But anyone privy to this conversation would not have been surprised. In a cordial dialogue with little substance, Abbas called for a two-state solution effort on the 1967 lines, and Trump promised a peace effort in order to reach a regional deal and called on the Palestinian leader to halt incitement to violence. In the conversation, Abbas was invited to visit the White House. This undoubtedly is an incentive for the pragmatic Arab leaders to join the coalition against the Islamic State. Trump dispatched his envoy, Jason Greenblatt, on March 13 to both Jerusalem and Ramallah to explore positions of both sides on a regional framework for peace.

According to a senior PLO official close to the Palestinian president, Abbas is in a desperate mood. He feels betrayed by his traditional Arab partners at a time when he needs them most. His despair is focused especially on Egypt, which is clearly backing his archrival — Mohammed Dahlan, the former security chief under PLO leader Yasser Arafat. Dahlan, who has been ousted from the Fatah movement, has established in recent years a political and financial powerbase in the Gulf.

According to the official, Abbas has, for now at least, given up on changing dramatically the existing status quo. He objects to an armed intifada for fear of his own regime, and he will reach out to the new administration hoping against all odds that Trump will indeed engage in a regional deal-making and a two-state solution. While most of the PLO leadership in the West Bank sides with Abbas, few — if any — support his passive posture.

Egyptian President Abdel Fattah al-Sisi’s support for Dahlan is well-known to the Palestinian leadership. That was apparently the reason why Abbas’ confidant Jibril Rajoub was denied entry to Egypt on Feb. 27. Dahlan is feared among most Palestinian leaders given his ruthlessness, financial corruption and the support he enjoys from Egypt and the Gulf countries.

A West Bank security official who has been close to Dahlan for many years denied that Dahlan wants to take over control of the Palestinian Authority (PA). The officials said that as an Arafat loyalist, Dahlan aspires to influence the Palestinian destiny. “Gen. Dahlan is a realist. He knows the importance of galvanizing inter-Arab support for the Palestinian cause. He is interested in greater influence in the West Bank and Gaza in order to provide counsel and Arab financial assistance. All attempts for reconciliation with President Abbas have so far failed,” said the official, speaking on condition of anonymity.

The official also emphasized that Dahlan’s main objective is to get rid of the Israeli occupation. He favors civil resistance to the occupation as well as realistic diplomatic efforts. In this context, Dahlan is interested in challenging Israel’s alleged willingness to negotiate. On the other hand, he has given up on international peace efforts.

The one Israeli leader who Dahlan is interested to engage with is Defense Minister Avigdor Liberman. Dahlan and Liberman know each other for many years and share the same language of crude force. According to the official, Dahlan is ready to test the defense minister’s alleged pragmatism and possibly negotiate with him on the basis of his plan for territorial and population exchange, as well as the 2002 Arab Peace Initiative.

The official noted that some elements in Liberman’s plan could possibly serve as the basis for a two-state solution. The way Dahlan interprets the plan, a framework for a two-state solution should include elements such as advocating two independent states; that the scope and territory of the Palestinian state be equal in size to the West Bank and Gaza; that in most areas the border could be the 1967 lines; that land swaps for the Palestinian state could include some pre-1967 Israeli territory (Dahlan estimates that such land swaps could reinforce Palestinian society cohesion); and that East Jerusalem, with its Palestinian population, would come under Palestinian sovereignty.

Evidently, Dahlan would consider these elements only as a basis for negotiations, together with all of the elements of the Arab Peace Initiative. With Liberman, Dahlan could actually agree to negotiate with an Israeli right-wing partner. This is a point he would impress upon the United States, the support of which he may need one day. Given the volatility of the PA and Egypt’s shifting approach — which according to Palestinian press reports is adopting nowadays a more lenient approach vis-a-vis Hamas — this scenario is a possibility to be considered.

A senior Israeli Ministry of Foreign Affairs official who spoke to Al-Monitor on condition of anonymity said that Prime Minister Benjamin Netanyahu rejects the Liberman plan. Israel is aware of Egypt’s backing of Dahlan but, for the continuation of its settlement policies, prefers a weak Abbas in Ramallah.