Will these Palestinian and Israeli leaders achieve peace? 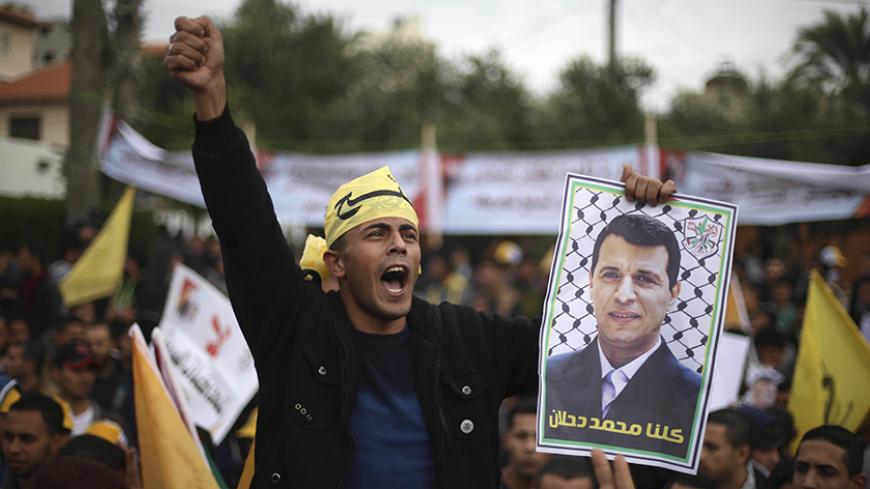 A Palestinian supporter of Mohammed Dahlan, the former head of Fatah in Gaza, holds a poster depicting Dahlan during a protest against Palestinian President Mahmoud Abbas in Gaza City, Gaza, Dec. 18, 2014. - REUTERS/Mohammed Salem

Mohammed Dahlan, the former Palestinian security head, is preparing for his moment of return. A Palestinian official close to Dahlan told Al-Monitor that the Palestinian general was very dismayed with Palestinian President Mahmoud Abbas’ decision to partake in former President Shimon Peres’ funeral on Sept. 30. Thus, he intends to use the public tumult around Abbas’ cooperation with Israel, including on security cooperation, to possibly return in the foreseeable future to the West Bank and to Palestinian politics, eyeing for the top.

Israeli officials are intrigued by Dahlan and his political prospects. There is a similar interest within the Palestinian Authority about the possible re-entry of retired Gen. Ehud Barak into Israeli politics. Both men are seen by the opposite side as a possible hope for more pragmatic policies.

A senior PLO official who spoke to Al-Monitor on condition of anonymity said that former Prime Minister Barak is a well-known figure to Palestinians. “We like him about as much as he likes us,” he said ironically. “Our experience with him is bitter. He is a narrow-minded occupation general, who, as prime minister, fooled late [PLO] President Yasser Arafat and US President Bill Clinton about having moderate proposals on the issues of borders and East Jerusalem; while, in reality, his positions were extremely hawkish. He was looking to blame Arafat for the failure of the talks in Camp David in the year 2000,” he argued.

On the other hand, the official praised Barak for having said that if he were Palestinian, he would have been a terrorist. He added that, given the Netanyahu government’s annexation policies, any more pragmatic alternative must be looked at with interest.

The Palestinians do more than just observe the Israeli political scene; they actively gather information about it from a multitude of political and media sources. They are very critical of Barak for a multitude of reasons. They estimate that he considers the use of force as a solution to political problems and that he is distrustful of everybody, especially of Palestinians, toward whom he is very condescending. His policy proposals do not come close to what the Palestinians perceive as realistic compromise positions on the issues of borders and security.

On the other side, the PLO official recognized some advantages from a Palestinian point of view, should Barak one day replace Prime Minister Benjamin Netanyahu. He said that the Palestinians know that Barak is a fervent believer in a two-state solution and that he considers the settlements to be a burden for Israel’s security. According to Palestinian estimation, the fact that Barak attributes great importance to US-Israel relations could drive him to work closely with the US administration on a two-state solution. His main advantage, concluded the Palestinian official, is that he is not Netanyahu.

In Israel, there is a similar sense of ambiguity toward the possibility of Dahlan returning to the West Bank. He is well-known to many in Israel’s defense establishment and to former negotiators with the Palestinians. Dahlan played a major role in the Oslo process and its aftermath. He advised Arafat and took pragmatic positions in the security portfolio of the negotiations.

A senior Israeli Ministry of Foreign Affairs official, who spoke to Al-Monitor on condition of anonymity, said that Egypt is pressuring Abbas to allow the entry of Dahlan into the West Bank. There are, in the Israeli view, pros and cons to Dahlan re-entering the ranks of Palestinian leadership.

On the negative side, said the Israeli source, while Dahlan believes in a two-state solution, he does not rule out violence as a way of making Israelis pay a price for the political stalemate. He has the nature of a tyrant, does not tolerate opposition and will use the Palestinian intelligence to quell it. The source added that Dahlan is unpopular among most Palestinians, mainly due to his alleged corruption. He is very rich and uses his wealth to bolster his position in the West Bank. Most Palestinians do not want a Dahlan dictatorship. The source estimates that despite being opposed to Hamas, Dahlan may opt for a partnership with it, as he has roots and family in Gaza.

On the other side, said the source, Dahlan has made many friends in Israel, especially in the defense establishment. He has a common language of force and pragmatism with people like former Shin Bet Chief Yuval Diskin and former Israel Defense Forces Chief of Staff Gabi Ashkenazi.

Indeed, Dahlan knows Israel, knows Israelis and is fluent in Hebrew, which could help the Palestinians renew a dialogue with the Israelis. Dahlan is a ruthless former general who could quell violence in and from the West Bank. His positions on a two-state solution are based on the 2002 Arab Peace Initiative and on a willingness to establish a Palestinian state based on pragmatic security positions. Should he decide to move in the future toward a peace process, he is both pragmatic and a deal-maker.

Not only that — he has the backing of the pragmatic Arab states such as Egypt and Saudi Arabia. Egypt especially could persuade him to take a pragmatic path.

With Barak and Dahlan possibly appearing again on Israeli and Palestinian political arenas, one should take into account the following: the political leaderships on both sides have failed in recent years to advance a peace process. It may be time to give the generals a chance.