The Israeli and the Palestinian political systems are preparing for the post-Netanyahu and post-Abbas periods, when security challenges will only increase. 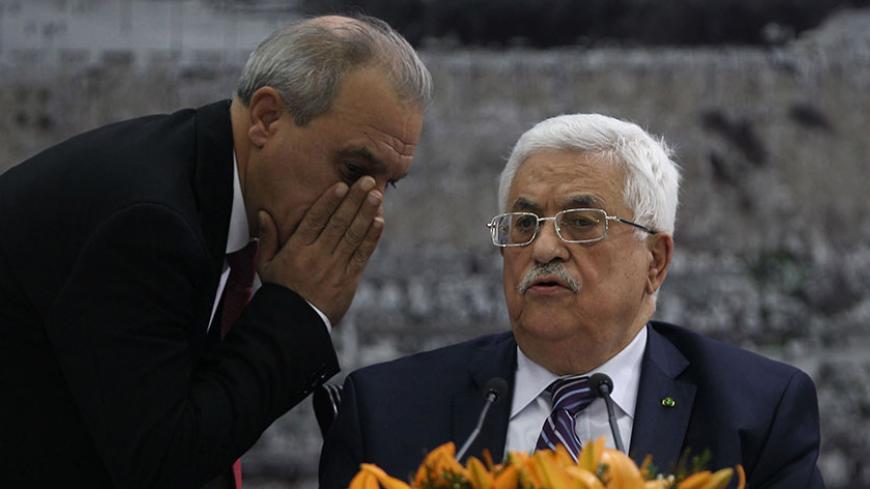 A visit to Ramallah these days leaves you with a sense of pessimism. The streets are buzzing with rumors about Palestinian President Mahmoud Abbas’ health. He was hospitalized July 29 for several hours. The official communique stated that his health condition is good, but to the skeptical Ramallah inhabitants, something suspicious is going on at the Muqata — the Palestinian Authority headquarters. More so, the health of the Palestinian leadership at large is the talk of the town. Recent publications revealed that PLO chief negotiator Saeb Erekat suffers from a serious lung disease and is waiting for a lung transplant in Israel or the United States.

A senior PLO official close to Abbas told Al-Monitor that Abbas is physically in good condition, but that his mood is very gloomy given his realization that there is no movement toward a two-state solution on the horizon. Abbas is very concerned for his confidant Erekat, who for all intents and purposes is his real foreign minister, as Erekat is in touch with the US administration, the European Union and Arab countries. On the other side, Abbas was encouraged by the strong backing he received from King Abdullah of Jordan when he visited Ramallah on Aug. 7.

Erekat has been viewed by many as the unofficial No. 2 and possible heir to Abbas. The PLO official noted that now that Erekat is sick, discussions concerning the future of the Palestinian leadership, even post-Abbas, are not a taboo topic anymore amid Abbas’ close circles. He said that in any case, be it under Abbas or the period after, the Palestinian Preventive Security Service headed by Gen. Majid Faraj will play an internal stabilizing role. Faraj is the strongman of the West Bank; he followed Jibril Rajoub in this position and is considered close to him.

Faraj is indeed an efficient intelligence officer. He counters challenges by Hamas, challenges within the Fatah movement by the radicals and challenges by loyalists of former Fatah senior and Abbas rival Mohammed Dahlan, who is cherished by the Gulf states and Egypt. Faraj is widely seen as the apparent heir of Abbas in the foreseeable future. He is a fervent nationalist, in close contact with the Israeli security commanders and in constant contact with US President Donald Trump’s peace process team.

Similar questions about leadership succession are heard in Jerusalem given the recent growing suspicion that Prime Minister Benjamin Netanyahu may be indicted in the months to come. A senior Israeli official close to Netanyahu told Al-Monitor that the prime minister is convinced he is facing a witch hunt. According to the official, Netanyahu is managing his legal and public case. He intends to face this challenge by battling against the Israeli left and media that allegedly want to unseat him. The official believes that the Likud leadership will remain loyal to Netanyahu at least until a decision is made by Attorney General Avichai Mandelblit, yet he admits that in the corridors of the Israeli Knesset, one can hear much talk about Israel’s leadership after Netanyahu.

The current uncertainty hovering over the prime minister’s political future opens the door to speculation on who will ultimately join the race for Israel’s new leadership, beyond Yesh Atid’s Yair Lapid and Labor’s Avi Gabbay. Netanyahu’s confidant would not elaborate, but expressed deep cynicism concerning Israel’s political elite beyond Netanyahu. Echoing his master’s voice, he described Israeli politicians of all parties as “opportunistic clerks.” He believes that after Netanyahu, which in his view may be quite a while away, other leaders than the ones currently dominating the political scene will advance to the forefront.

There is a mirror image between Ramallah and Jerusalem’s political instability, opening the way for graduates of the strong security establishment on both sides to take over political leadership sooner rather than later. But until that happens, the main and immediate victim of the current political situation on both sides is the US-sponsored peace process.