While Israel’s political leadership waits impatiently for the post-Abbas era, the country’s top security experts warn that Israel will miss the Palestinian leader. 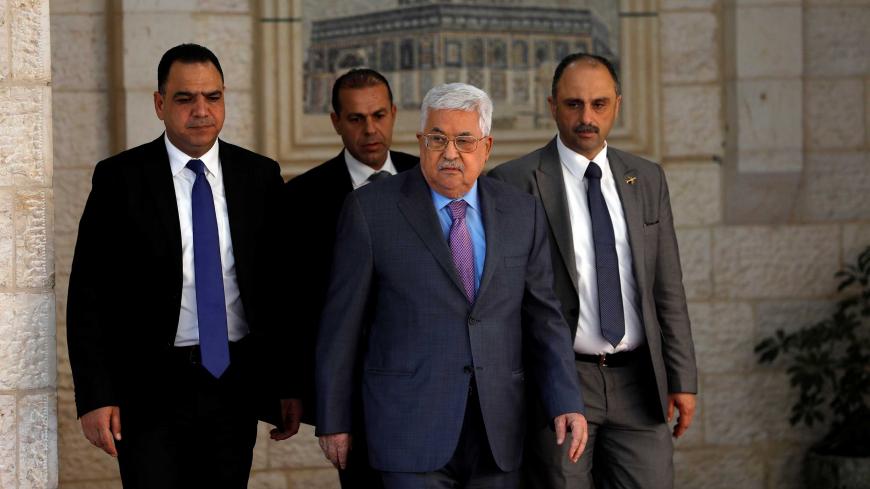 Three hospitalizations in the course of a week have made whispers about the health of Palestinian President Mahmoud Abbas the stuff of headlines. On the evening of May 20, with Abbas in a Ramallah hospital with a high fever, an ear infection and possible pneumonia, a senior Israeli defense official speaking on the condition of anonymity told Al-Monitor that Israel does not perceive an immediate threat to the Palestinian leader’s life. In the same breath, he added, however, “There is no debate that we are seeing his final leadership days.” Other Israeli security sources say, based on intelligence reports, that the elderly Palestinian leader — 82 and a half years old, still chain smoking and with a long list of medical ailments — could exit center stage anywhere from a few months to two years from now. In other words, the time is about right to prepare for what happens after his departure.

When I recently asked five Israeli Cabinet ministers who will take over after Abbas, not one could offer a name or even a well-thought-out assessment of what might happen. The situation is the same among members of Israel’s intelligence community. When Palestine Liberation Organization (PLO) Chairman Yasser Arafat was dying, there was no doubt that Abbas would succeed him. Now, with Abbas, the most common response is, “Anything can happen.” As far as anyone knows, the Israeli Cabinet has not held serious discussions about who the next partner for peace will be. Perhaps it is because most Cabinet members are not interested in such a partner.

Abbas himself has done nothing to ensure an organized transfer of power. Majid Faraj, head of his security forces, may be the Americans' choice and appreciated by the Israelis, but Abbas has not positioned Faraj to be his successor in any of the PLO’s institutions. Israel thinks Abbas simply wants to be missed. Given the situation, the most common assessment in Israel is that once Abbas is gone, the Palestinian Authority (PA) will face a succession struggle.

It is possible that a triumvirate will be formed or that one of several bureaucrats will be appointed for a set period of time. The names being mentioned in this regard are Mahmoud al-Aloul, who was appointed Abbas' deputy in the PLO in 2017, or the current PA prime minister, Rami Hamdallah. Some people have also mentioned former Prime Minister Salam Fayyad, who would have been the dream candidate of the previous US administration, for placing “economic peace” over a comprehensive peace agreement.

Regardless, the Israeli security establishment is concerned about the day after Abbas, with the PA in a transition and Hamas in the background trying to seize control of the West Bank. Most experts estimate that during this period, the PA will be administered by a governing group rather than a single leader.

Behind the scenes, Israel is talking about the deep-rooted strategic debate between the Israeli political and military leadership regarding attitudes toward Abbas while he is still alive. Over the last few months, senior Israeli ministers have competed among themselves for the privilege of shaming Abbas, of calling him derogatory names and charging that he supports terrorism and even coordinates terrorist attacks, all the while hoping he'll disappear. Defense Minister Avigdor Liberman has been behind this trend for the past two years and was recently joined by other ministers, the most prominent being the relatively moderate energy minister, Yuval Steinitz.

Then there is the professional echelon, whether the Israel Defense Forces’ Military Intelligence, Shin Bet or the military leadership in general, from Chief of Staff Lt. Gen. Gadi Eizenkot on down. They have a completely different outlook. In a series of conversations with several defense establishment senior officials over the last few months, I heard a different assessment of Abbas.

His very clear directive to continue combating terrorism has not changed. The PA continues to fight terrorism, and its security forces continue to cooperate with Israel on it. In fact, numerous attacks have been prevented by Israeli-Palestinian cooperation. Most important, however, Abbas has prevented the most heavily armed force in the West Bank, Fatah’s own Tanzim, from joining the circle of terror. “It is what kept the system with its head above water during the wave of knife attacks over the last two years,” one senior defense official told Al-Monitor, speaking on condition of anonymity. “Only clear instructions from Abbas kept most Palestinians out of the circle of violence.” That’s the main thing as far as the IDF and the security establishment are concerned.

As for the political leadership in the most right-wing coalition in Israeli history, that Abbas dares to fight Israel on the diplomatic front is unforgivable. Similarly, that he continues to pay the salaries of murderers and other prisoners sitting in Israeli prisons is considered a casus belli. The defense establishment has repeatedly told the political leadership that it will miss Abbas when he’s gone. The politicians respond with apathy. They want to be given a chance to miss him first.

The revulsion that Liberman feels toward Abbas is frequently attributed to Liberman's close relationship, according to regional sources, to former Fatah official Mohammed Dahlan, who wanders between the United Arab Emirates and Egypt, amassing power, and Mohammed Rashid, Arafat’s legendary moneyman. Liberman has grandiose regional plans that involve these two men, or at least one of them, and others, among them the Egyptians and Saudis. Yet the feasibility of these plans remains up in the air. What is clear is that Liberman is eagerly awaiting the day Abbas leaves the stage. “What do you want him to do? Sing ‘HaTikva’ every morning?” Maj. Gen. Yoav Mordechai asked Liberman in one of their frequent arguments when Mordechai headed the Coordination of Government Activities in the Territories, according to a defense official.

Someone else missing from the equation is senior Fatah member Marwan Barghouti, currently serving five life sentences and 40 more years for overseeing terrorist attacks during the second intifada (2000-2005). Barghouti enjoys widespread support among the Palestinian public and is frequently mentioned as someone who could lead the West Bank after Abbas. For that to happen, however, Israel would have to release him from prison, and for that to happen, there would first need to be a change of government in Israel.

Despite rumors and speculation over the last few weeks, no one in Israel's political leadership has any plans to spring Barghouti. Even if Prime Minister Benjamin Netanyahu were to come to the conclusion that only Barghouti could prevent Hamas from taking over the West Bank, it is doubtful he would have the political stamina to initiate the popular Palestinian leader’s release, even though Barghouti is, ostensibly, one of the more pragmatic Palestinian leaders and a member of the PLO rather than Hamas. Since no one imagines the left returning to power in Israel in the foreseeable future, it looks like Barghouti will remain in prison for many long years to come.