How will Israel deal with Palestinians in post-Abbas period?

As talks about President Mahmoud Abbas’ resignation intensify, Israel seems to be the main beneficiary of the Palestinian Authority's impending political vacuum. 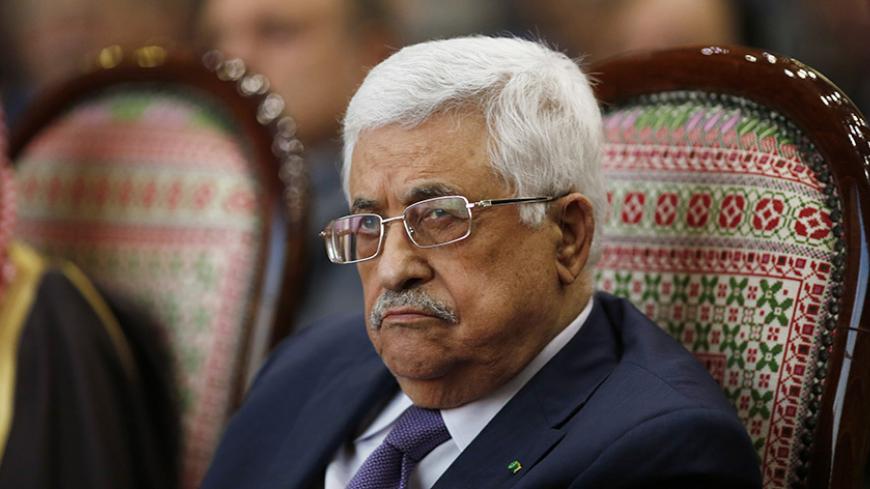 The Palestinian political scene has been preoccupied since the end of July with the succession of Palestinian President Mahmoud Abbas, and the subsequent concerns and worrying speculations about the future of the Palestinian Authority in the West Bank in Abbas’ potential absence. There are concerns among Palestinians that the PA will be emptied of its political content, and that it will gradually be transformed into expanded municipal councils that fulfill service roles, like before the establishment of the PA in 1994.

Mohammad Shtayyeh, a member of Fatah’s Central Committee and former minister of public works and housing, told Al-Monitor, “Israel is seeking to make Palestinians live in cantons and secluded areas in the absence of political components and the PA has become merely a name that does not span beyond an expanded municipality.”

Maj. Gen. Mohammad al-Masri, former officer at the Palestinian General Intelligence and head of the Palestinian Center for Strategic Studies, warned Aug. 15 against an Israeli plan to weaken the PA. In the upcoming stage, Israel will deal with municipalities and Palestinian parties in the West Bank directly, thus weakening the PA and costing it much of its legitimacy.

On Jan. 19, former Israeli Minister of Foreign Affairs Avigdor Liberman spoke on behalf of Israel and demanded finding an alternative leader for Abbas, saying that there are many educated Palestinian leaders who are more tolerant and open to negotiations.

Palestinians realize that Israel has a clear impact on their internal affairs and on the nature of the political system governing them. They remember its pressure on late President Yasser Arafat, when it forced on him the appointment of Abbas as prime minister and Salam Fayyad as minister of finance in 2002.

A prominent Palestinian security official told Al-Monitor on condition of anonymity, “Some Palestinians — especially Palestinian capital holders and businessmen whose economic interests intersect with those of Israel — might be prone to agree with the Israeli policy of turning the PA into a wide-scale service entity devoid of political content. This is in light of the PA’s continuous weakening. However, the Israeli plan might not culminate in eliminating the PA completely, but keeping it as a frail authority.”

Israel started practicing a policy of marginalization for the PA in the West Bank and disregarding it by cooperating directly with Palestinian citizens. In mid-July, Israel granted 300,000 Palestinians permits to visit Jaffa and Tel Aviv.

This step, of Israel granting permits directly to Palestinians through the Israeli Civil Administration bureaus across the West Bank without referring to the PA, is a dangerous one. Israel acted as though it were in charge of the West Bank’s citizens, giving the impression that they do not have an authority to represent them. Not only is this blatant disregard for the PA, but also an exaggeration of the role of bureaus affiliated with the Israeli army as an actual governing authority for Palestinians.

The Israeli Civil Administration is directly in charge of more than 60% of the territories of the West Bank that are classified as Area C under the Oslo Accord. The Israeli government seems to be seeking to gradually give this administration wider privileges in the West Bank areas at the expense of the PA.

Mahmoud Aloul, member of Fatah’s Central Committee, told Al-Monitor, “We must pause and think about Israel’s granting of permits to the Palestinians of the West Bank, because this is directly related to Israel’s desire to reconnect and cooperate with them. Meanwhile, Israel is reiterating the inefficiency of the PA and the potential return of its civil administration.”

The same Palestinian security official said, “Israel might not be back to occupy the West Bank completely in the post-Abbas phase, but it might resort to conquering some regions of the West Bank and appointing some local leaders instead of the PA’s government to carry out service and administrative tasks in the remaining Palestinian territories. There are Palestinian concerns that each Palestinian city and village that is outside the PA’s direct control might turn into a region in the Israeli army’s grip. Israel will encourage such a scenario.”

This is not the first time that Israel has directly contacted Palestinians without a mediating authority. Between 1976 and 1982, Israel established village leagues to replace the Palestine Liberation Organization by tasking the municipal councils and provinces in the West Bank with managing the educational, health and agricultural affairs of Palestinians.

Ibrahim Abrash, the former Palestinian minister of culture, told Al-Monitor, “The Palestinian people have come to realize that Israel — which divided them in the first place — is seeking to revive village leagues in isolated cantons in the West Bank at the expense of the PA in the post-Abbas phase.”

The Palestinian fears of the PA’s marginalization coincided with Israel’s warning that it will have to manage the situation in the West Bank after Abbas is no longer in the picture. Israeli commentator on Palestinian affairs Avi Issacharoff stated Aug. 17 in a Times of Israel article that Gen. Yoav Mordechai, who is the coordinator of the Palestinian territories’ affairs in the Israeli Defense Ministry, might be placed directly in charge of the West Bank’s affairs.

Al-Monitor examined an undated security report that reached Abbas weeks earlier. The report stated, “Israel is communicating with Palestinian officials, including municipal heads and governors, through officers in its security apparatus to discuss service and coordination issues without referring to the relevant Palestinian ministries, rather disregarding them.

There are many possible scenarios for the PA’s future after Abbas. Therefore, Palestinian decision-makers are faced with tough questions: Will the PA, which was established as an interim authority until the establishment of the Palestinian state, end up at the mercy of Israel? Is the PA already governed by Israel? Or will it become a security entity affiliated with the Israeli military and its security apparatus soon after entering a political vacuum?