Though Palestinian demands to end security cooperation between Tel Aviv and Ramallah are growing ever louder, coordination between Israel and the PA seems stronger than ever as both sides struggle to contain the unrest. 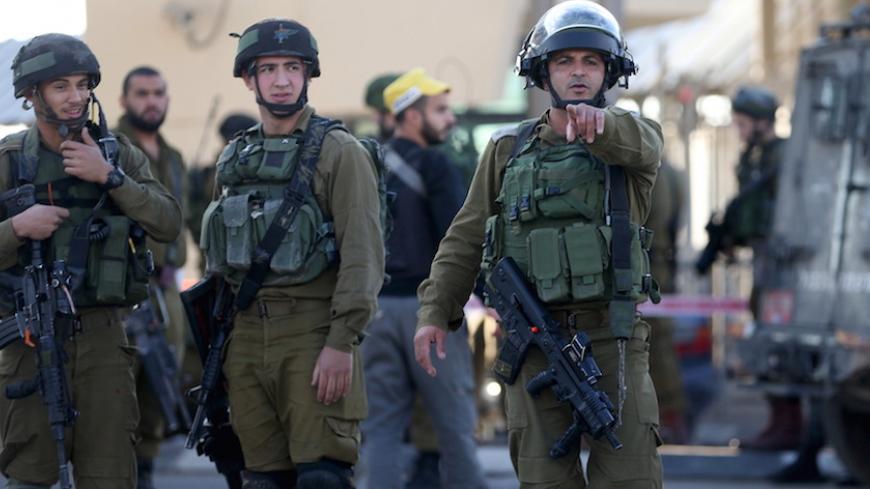 An Israeli soldier gestures as he stands guard with others at the scene of what an Israeli police spokeswoman said was a car-ramming attempt by a Palestinian at the West Bank checkpoint of Qalandia, near Ramallah, Dec. 18, 2015. - REUTERS/Mohamad Torokman

With Palestinian attacks against Israelis ongoing since the beginning of October, the political gap between the Palestinian Authority (PA) and Israel has been widening. Israel has been accusing the PA and President Mahmoud Abbas of instigating the attacks — charges leveled by Israeli Prime Minister Benjamin Netanyahu on Dec. 15 and by Israel’s Ambassador to the UN Danny Danon on Oct. 23.

Interestingly, however, despite the almost complete political rupture between Tel Aviv and Ramallah, security coordination between Israel and the PA seems to be increasing.

In an Oct. 14 press statement, David Menachem, head of the Israel Defense Forces' Civil Administration in the West Bank, said security coordination between Israel and the PA was ongoing and had not changed despite the deteriorating security situation in the Palestinian territories.

The coordinated security efforts have led to the arrest of armed Palestinian groups planning military operations against Israelis. Most recently, Palestinian security agencies thwarted a Dec. 1 attack against Israeli soldiers by a cell affiliated with the Islamic Jihad movement in the West Bank city of Tubas. The group planned to detonate a hot air balloon loaded with explosives above a military target.

Adel Samara, a Palestinian academic and editor-in-chief of Kanaan Online in Ramallah, told Al-Monitor, “The PA has a clear and well-defined mission, which is to carry on with the security coordination with Israel, given that the Oslo Accord is based more on security than on political grounds. These have granted Israel full security powers whereby it can control Palestinian territories, but failed to grant the PA any political [privileges] in return."

If the uprising expands, Israel could seek to communicate directly with some Palestinian security officers to maintain security in the West Bank. Contact is currently done through political channels represented by the Palestinian government and Abbas' office.

At the same time, Israel could deliberately strip the PA of its limited political functions by activating the role of the Civil Administration and making Palestinians communicate with it directly, while portraying the PA as a political entity that has nothing to offer. Security is the basis of all political agreements between the two sides, especially the Oslo Accord.

In this paradoxical situation, there are several possible scenarios that could play out in the security arena. Most likely, security coordination will continue between the two sides as the PA manages to overcome the popular opposition in this regard.

In a third scenario, the PA would gradually decrease coordination with Israel, yet not halt it completely, to prevent any strong reactions from the latter.

Mustafa Barghouti, secretary-general of the Palestinian National Initiative, said Oct. 7 that security coordination between the PA and Israel is based on a bad premise, as the Palestinian people continue to suffer under the Israeli occupation, while they are required to work with their occupying forces. He stressed the importance of tremendous foreign pressure on the PA to maintain security coordination with Israel.

On Nov. 24, An-Najah National University's Center for Opinion Polls and Survey Studies in Nablus published the results of a survey showing that 69.8% of Palestinians want to end security coordination with Israel.

However, Ghassan Khatib, a former Palestinian minister of labor, former minister of planning and a media professor at Birzeit University, told Al-Monitor, “At the height of the confrontations between Israelis and Palestinians, one ought to take into account the joint political agreements, especially the Oslo Accord, regarding the distributed functional tasks between the PA and Israel. While the PA is in charge of managing the Palestinians’ livelihoods in terms of services, Israel is responsible for the security and military aspects inside the Palestinian territories. Thus, it would not be wise for the PA to end security coordination with Israel, which would harm the interests of Palestinians in the West Bank. Yet, if Abbas wishes to suspend any coordination in this regard, he is able to, but I do not think he wants to now.”

Since the unrest began in early October, Israel has been tightening its security grip over parts of the West Bank, conducting mass arrests and raids in different areas. Some 21,000 Palestinians have been arrested since Oct. 1. The PA’s political role has been declining inside the West Bank, becoming limited to municipal powers and security coordination with Israel.

“The PA serves as a security proxy for Israel, which has been its role since its inception in 1993. The PA is well aware that this coordination with Israel is what is maintaining its funding from the international community," Ismail al-Ashqar, head of the Security and Interior Affairs Committee at the Palestinian Legislative Council, and one of Hamas’ leaders in Gaza, told Al-Monitor. "However, with the increasing political differences between the two sides, Israel could directly contact heads of Palestinian security apparatuses to have them implement the required missions, regardless of the PA’s collapse or not.”

Israel might have an unexpected response to a Palestinian decision to end security coordination. The PA is well aware of this possibility and being cautious despite growing Palestinian demands for such action. Israel could restrict the movements of Abbas and other PA figures between cities in the West Bank, preventing them from passing Israeli checkpoints without coordinating first. These officials must stop at these checkpoints as they move from the West Bank to the Gaza Strip, Jordan or Israel, thus forcing them to coordinate with the Israeli military before moving from the West Bank. Would the PA be able to withstand such sanctions?