Palestinians seem to be caught between a rock and a hard place with Israel’s shifting away from a two-state solution and the diminishing chances of such an option after the announcement of the US Middle East peace plan. 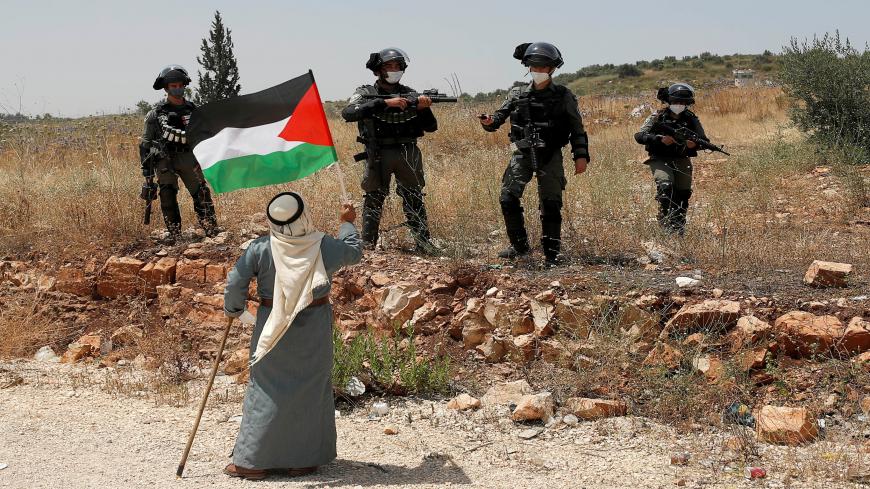 A demonstrator holds a Palestinian flag in front of Israeli forces during a protest against Israel's plan to annex parts of the occupied West Bank, near Tulkarm, June 5, 2020. - REUTERS/Mohamad Torokman

While the start of the implementation of the Israeli annexation plan of the West Bank is due in early July, Palestinian leaders have recently revealed past Israeli proposals for an alternative to the two-state solution.

Majid al-Fityani, secretary of Fatah's Revolutionary Council, said in a press statement May 30 that Israel had made an offer to the Palestinian Authority (PA) a few years back to grant Palestinians a civil status in Israel without a recognized state or control over security, sovereignty and borders. Fityani did not provide an exact date to the alleged proposal.

“We naturally rejected this project as our issue is a political one and has never been economically motivated. Should Israel try to play this card again, we will turn it down,” he said.

Azzam al-Ahmad, a member of the PLO Executive Committee and Fatah’s Central Committee, said May 16 that Israeli Prime Minister Benjamin Netanyahu also made a proposal to the PA, whereby the Palestinian leadership would enjoy indefinite economic autonomy.

Ahmad believes that does not amount to a state or a semi-state with the absence of control over land, crossings and airspace. “We will not accept this,” he stated in a press statement.

In an interview with Israel Hayom newspaper May 28, Netanyahu announced his willingness to give Palestinians “an entity of their own” if they recognize “Israeli sovereignty west of the Jordan River, preserving a united Jerusalem, refusing to accept refugees, not uprooting Jewish communities and Israeli sovereignty in large swathes of Judea and Samaria [the West Bank].”

It has become clear that none of the Israeli proposals are even remotely close to the two-state solution that the Palestinians have been calling for.

Wasel Abu Youssef, a member of the PLO Executive Committee, told Al-Monitor, “The PA will not go back on any of the established rights, i.e., the right of return, self-determination and the establishment of a Palestinian state with Jerusalem as its capital. We also reject all the Israeli proposals that are in line with the deal of the century [US peace plan] that talk about establishing a Palestinian state within four years of the announced of the plan.”

He added, “We are saying no to all such offers because they mean perpetuating the occupation through proposals of more town annexations, and autonomy as per the Camp David agreement with Egypt and the resettlement of refugees in the Sinai Peninsula."

Despite the PA’s refusal to such Israeli schemes, the political data on the ground show that things are going in the opposite direction in light of the ongoing Palestinian division with the existence of two separate Palestinian entities in the West Bank and the Gaza Strip. This is not to mention the decline of international talk about a two-state solution, especially after the announcement of US President Donald Trump’s Middle East plan, and the rise of the Israeli right wing, which is not in favor of this solution.

He said, “Israel insists that there will be no state west of the Jordan River other than the Israeli state. Despite the PA’s media statements of its refusal to such proposals, I believe those proposals will gradually become a fait accompli on the ground. The PA will end up being relegated to an administrative apparatus managing the Palestinians’ civil affairs."

Talal Abu Zarifa, a member of the political bureau of the Democratic Front for the Liberation of Palestine, told Al-Monitor, “These Israeli proposals are rejected by the Palestinians, but could become a reality if the Palestinian status quo remains unchanged and if [the Palestinian leadership] continues to bank on the resumption of negotiations with Israel.”

He noted, “I believe the situation necessitates a firmer Palestinian stance and an outright refusal of these proposals based on national consensus and a strategic vision to face the Israeli maneuvers aimed at fooling the international community and accusing the Palestinians of rejecting all offers made to them."

Hani al-Masri, head of the Palestinian Center for Policy Research and Strategic Studies - Masarat, told Al-Monitor, “These proposals may find their way to implementation in light of the current balance of power between Palestinians and Israelis. The approval of the Palestinian side, however, would remain a prerequisite for the implementation of such schemes on the ground. But I don’t believe any Palestinian leader would agree to such a step."

He added, “The Israelis could, however, deploy their military forces in some areas of the West Bank to fulfill their political aspirations."

The harsh reality is that as things stand now, the Palestinians have a very narrow margin of self-rule, as opposed to the extensive autonomy they enjoyed during the Oslo Accord period from 1993 to 2000. After the second intifada and the arrival of President Mahmoud Abbas to office, Israel had bypassed the Oslo Accord, between 2000 and 2005. Today, as Abbas’ era is coming to an end, the Palestinians are left with even less powers, limited to their internal security in the hands of the civil police, which is the reason behind Israel’s continuous support for Abbas until further notice.