Israeli Prime Minister Benjamin Netanyahu’s suggestion to deploy international forces in the Gaza Strip as a security solution has been met with stiff opposition from Palestinians. 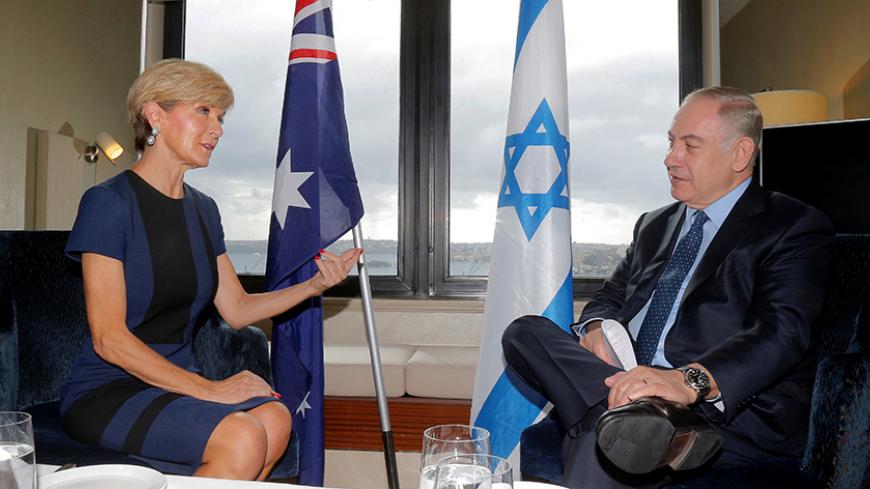 After meeting with Israeli Prime Minister Benjamin Netanyahu in Washington Feb. 15, US President Donald Trump announced in a press conference that he supports whatever Israelis and Palestinians end up agreeing upon, either a one-state solution or a two-state solution. This brings around previously discussed options, such as a confederation between the West Bank and Jordan, a Palestinian state in the Gaza Strip and Sinai Peninsula, and a binational state for Palestinians and Jews.

On Feb. 26, Netanyahu met with Australian Foreign Minister Julie Bishop in Sydney and publicly suggested, for the first time ever, that international forces take control of the Gaza Strip as a security solution to deal with Gaza, without clarifying how such an arrangement would be implemented.

On the same day, Salem Atallah, the head of the political department of the Mujahedeen Brigades, said in a press statement that bringing in international forces to take control of Gaza is a far-fetched option because “such foreign interference will be met with resistance.”

On Feb. 26, Mohammad al-Hindi, a member of the Palestinian Islamic Jihad movement’s political bureau, said during a political forum in Istanbul that he believes the threats made by Israel about international forces being deployed in Gaza are part of the psychological war on Palestinians.

Hamas spokesman Abdullatif al-Kanou told Al-Monitor, “The idea of international forces in the Gaza Strip is completely unacceptable because it is a blatant interference in Palestinian internal affairs and it only aims to eradicate the Palestinian cause. Gaza was liberated from the Israeli occupation and now the blockade imposed by Israel since 2006 needs to end. Any international forces in Gaza would serve as an occupation force, as they would be providing the Israeli occupation with a free service. The Palestinian people will never accept such ideas that serve Israel.”

Israel might be aware that the idea of international forces in Gaza cannot be applied immediately, but it could have suggested it just to see how Palestinians, neighboring countries and the international community would respond. Implementing it would require approval from the Palestinian Authority (PA) and Hamas. If these two parties do not grant permission, Israel could resort to agreements with regional parties such as Egypt, which can approve the deployment of international forces in Gaza as it shares a long border with Gaza.

Abdullah Abdullah, a member of Fatah’s Revolutionary Council, told Al-Monitor, “The idea of international forces in Gaza is consistent with Netanyahu’s rejection of a Palestinian state and his desire to keep the Gaza Strip and the West Bank separated, so as to eliminate the possibility of establishing a Palestinian state. Palestinians might not have a say in this, and such forces could end up being imposed on them through a regional initiative, so Israel would not have to remain the only one responsible for maintaining security at the border with Gaza.”

In May 2010, Palestinian President Mahmoud Abbas met with then-US special envoy for the Middle East George Mitchell in Ramallah and informed him of the PA’s approval of NATO forces being present in the Palestinian territories. This means that, if need be, there could be a Palestinian desire to have United Nations forces on their land as part of a political solution.

Talal Abu Zarifa, a member of the Democratic Front for the Liberation of Palestine’s political bureau, told Al-Monitor, “We are in favor of the deployment of international forces to protect the Palestinian people in all the lands occupied in 1967 — not only in Gaza — and avoid any conflicts between the Palestinian forces regardless of their orientation. However, Netanyahu wants these international forces to protect Israel from the resistance.”

Israel may be intending to get rid of any responsibility as far as the Gaza Strip is concerned. It seems that Israel believes the deployment of international forces in Gaza may lead to the establishment of a port and an airport, which would allow Israel to guarantee its own security and turn Gaza from an Israeli issue into a regional and international issue, similar to other international experiences such as South Sudan's. However, this raises several questions about the future of Hamas as a large armed force in Gaza.

Youssef Rizqa, the minister of information in the former Hamas government, told Al-Monitor, “Hamas will not accept Netanyahu’s suggestion to deploy international forces in Gaza, as such a move would allow Israel to separate Gaza from the West Bank and Jerusalem, and to annihilate the resistance in the Gaza Strip. This move would leave us with a model similar to the [UN Interim Force in Lebanon], whereby Israel would allow Hamas to remain as an armed force alongside international forces based on certain understandings, like Hezbollah’s case [in Lebanon]. This is because Israel would rather deal with NATO, which includes European Union countries and the United States — which Israel has close ties with — than with UN-affiliated forces.”

Hossam al-Dajani, a professor of political science at Umma University in the Gaza Strip, told Al-Monitor, “Israel suggested the deployment of international forces in Gaza to ensure its security and carry out its scheme of entrenching a state with no sovereignty. Also, there is an Israeli understanding with Egypt in order for these forces to secure the Sinai border.”

Dajani added, "However, I expect an armed clash between the Palestinian resistance and these troops, which would support Netanyahu’s vision whereby the resistance is a form of terrorism that should be fought through international forces. Also, such deployment of forces should be preceded by a strong Israeli military strike against Hamas in Gaza, one that would take it years back, in order to facilitate the entry of international troops. However, so long as Hamas has an armed arsenal, no state will agree to send its troops to Gaza.”

The Palestinians fear that the idea of ​​international forces is part of an Israeli scheme to legitimize the occupation as part of an agreement with regional countries, and that these troops will help implement the Israeli plan to establish separate cantons, which will disconnect the Palestinian cities and towns from each other, such as in the West Bank.