Is PA on verge of collapse?

There has been speculation that Israel is preparing to possibly dissolve the Palestinian Authority in the West Bank against the backdrop of the violent attacks against Israeli soldiers. 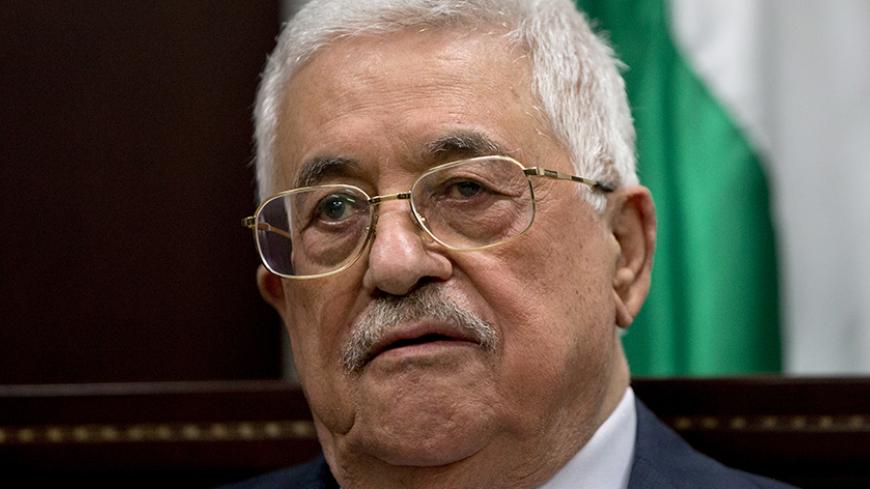 PA President Mahmoud Abbas listens as US Secretary of State John Kerry answers a question from a reporter during their meeting in the West Bank city of Ramallah, Nov. 24, 2015. - REUTERS/Jacquelyn Martin

Security and military measures by the Israeli authorities have been ongoing in the West Bank since Oct. 1. Palestinians are being arrested, cities are being dismembered and homes demolished in an attempt to stop the unrest.

At the height of the Israeli-Palestinian tension, the leak published by Haaretz Nov. 21 came as a surprise. According to the Israeli newspaper, Israel's mini-Cabinet for political and security affairs discussed Oct. 19-20 the possible collapse of the Palestinian Authority (PA) and the measures to be taken should this happen.

Some Israeli ministers, such as Education Minister Naftali Bennett and Justice Minister Ayelet Shaked, said Nov. 27 that the collapse of the PA would serve some of Israel’s interests and demanded that their government not prevent such an occurrence.

However, Israeli Prime Minister Benjamin Netanyahu announced Dec. 1 that he does not wish for the PA to break down, for fear of worse alternatives that might harm Israel’s security.

The PA has not issued any official commentary on the news. This scenario is no academic debate, but an issue discussed by Israel's political, military and security decision-makers.

Some PA figures, however, ruled out this possibility, as Abdullah Abdullah, head of the Political Committee of Fatah’s Legislative Council, said Nov. 28 that what is happening is an attempt by Israel to pressure the Palestinian leadership.

On Dec. 5, in a speech to the Saban Forum at the Center for Middle East Policy at Brookings in Washington, US Secretary of State John Kerry warned against dissolving the PA, as it would pose a threat to Israel.

Sufian Abu Zaid, a member of Fatah’s Revolutionary Council, told Al-Monitor, “Israeli officials have yet to reach an agreement on the hypothetical collapse of the PA. While right-wing ministers favor this scenario, the opposition, security services and the army are against it, considering that the gradual collapse and the alternative to the PA would cause further security chaos in the West Bank.”

Kerry’s warnings about the collapse of the PA in conjunction with the Israeli government deliberations may have been more than coincidence. This could be related to the deterioration of relations between Israel and the PA, as Israel has been unable to halt the wave of Palestinian attacks despite heavy military and security action, not to mention Israel’s increasing incitement and Israeli Minister of Defense Moshe Ya'alon's Nov. 30 accusation that the PA is unable to stop the attacks.

The former minister of information in the Hamas government, Yousef Rizq, told Al-Monitor, “The Israeli deliberations on the scenario of the PA collapse are serious and not blown out of proportion. Israel has been banking on a regional solution through its enhanced relations with some Arab states through calling for a regional conference with the participation of Arab states where there is the possibility of overriding the PA. This is what the Israeli right has put forth, as it seeks to annex all Palestinian areas in the West Bank to Israel.”

Rizq added, “The PA collapse scenario may play out, given the Israeli right-wing positions. In this case, Israel would find difficulties in running the Palestinians’ affairs in the West Bank, and may return to the pre-PA period prior to 1994. This would mean that Israel will be forced to bear [further] administrative, economic and security burdens.”

At the moment, Palestinians may not have a firm idea of how a potential collapse may play out, such as through a comprehensive Israeli military operation sweeping the West Bank that could restrict President Mahmoud Abbas’ movement, as happened with late Palestinian President Yasser Arafat in 2002.

However, Israel could also start gradually targeting Palestinian security services in the West Bank and arresting some of its members for being involved in attacks against it. Most recently, Israeli forces shot and killed Palestinian intelligence officer Mazen Oraiba, who ran over Israeli soldiers in north Jerusalem on Dec. 3.

Israel could also stop the transfer of tax funds to the PA, leading to the gradual breakdown of the PA. The latter would be unable to pay its employees, especially security staff, who in turn would not be able to work. All this would lead to security chaos in the West Bank.

Al-Monitor met with a PA security officer who preferred to remain anonymous to discuss the PA collapse scenario expected by the Israelis. He said, “Israel may go as far as to divide the West Bank into several geographical areas under the control of an Israeli military commander, who would have control over the security measures to stop Palestinians’ attacks against Israelis. This scenario could involve establishing cement checkpoints around villages and towns, whereby the Israeli army would prevent car traffic between Palestinian cities. Such measures would undermine the PA control over the West Bank, weakening its influence and thus paving the way to its gradual collapse.”

These statements are in line with an article by the editor-in-chief of al-Hayat al-Jadida, which has ties to the PA. Hafez Barghouti wrote Aug. 15 that should the PA truly collapse, Israeli Maj. Gen. Yoav Mordechai would coordinate the operations of the Israeli government in the occupied Palestinian territories, including the West Bank.

Perhaps the biggest problem facing Israel should the PA collapse would be the unknown fate of the armed Palestinian security forces. Their thousands of weapons could fall into the hands of the Palestinians carrying out attacks against Israelis in the ongoing unrest that could turn into clashes. This possibility could make Israel think twice before trying to dissolve the PA.

Hani Masri, general director of Masarat, the Palestinian Center for Policy Research and Strategic Studies in Ramallah, told Al-Monitor, “An Israeli massacre against the Palestinians, a fundamental change in the situation of Al-Aqsa Mosque, a martyrdom operation that results in a large number of Israeli dead or in the death of President Abbas, Abbas’ resignation prior to agreeing on his successor or a change in the current Palestinian policy toward confronting the Israeli occupation are all developments that could lead to the collapse of the PA.”

It may be true that the PA neither fully supports nor stands against the uprising. Yet, this hesitation does not seem to be enough for Israeli decision-makers, and it may prompt them to adopt a gradual policy toward brinkmanship, to put pressure on the PA and make it feel that it is doomed to collapse if it does not oppose the uprising. The PA does not seem likely to announce a stance anytime soon.