Palestinian Authority looks to reinvent itself

A member of Fatah’s Central Committee has taken to the media to declare a shift in focus for the Palestinian Authority toward more revolutionary politics. 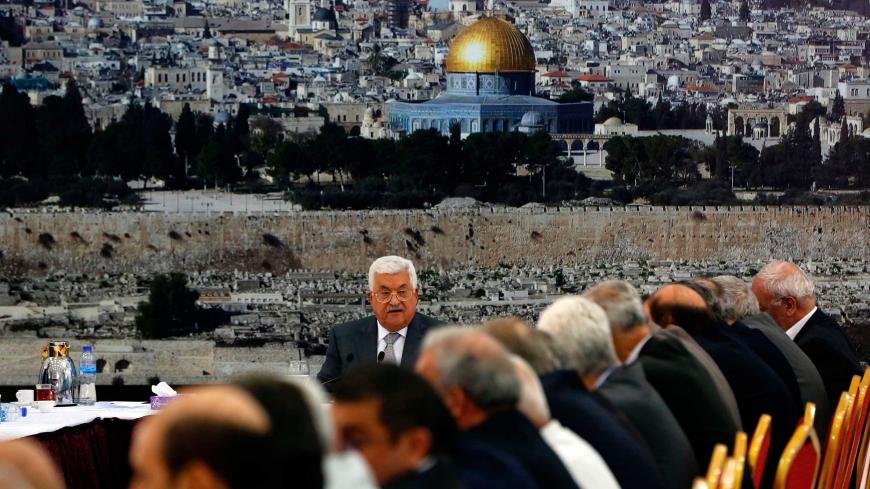 The West Bank leadership is not dissolving the Palestinian Authority (PA) but rather transforming it from an administrative and municipal authority to a resistance authority, a Fatah official said recently. Mohammad Shtayyeh, a member of Fatah’s Central Committee, told Al-Quds newspaper the PA will begin focusing on issues such as boycotting Israel and obstructing settlement construction.

Shtayyeh’s Aug. 30 statements came two weeks before the Sept. 13 anniversary of the signing of the Oslo Accord between the PLO and Israel in 1993.

Hamas, on the other hand, has said it is dissolving its administration in the Gaza Strip. Perhaps that's why some Palestinians have speculated lately about the possible collapse of the PA and its transformation into a self-governing authority rather than a sovereign state. Shtayyeh, who previously served as the minister of public works, told Al-Quds that dissolving the PA is out of the question.

“We do not want to preserve the same status quo. The Palestinian government, with all its institutions, including the police, the security apparatus and other institutions, has to contribute to this shift. They have to turn into a resistance authority against Israeli settlements. We should be able to take measures without the permission of Israel, such as digging water wells and reforesting Area C in the West Bank, among other steps," he said.

"We should not forget that 138 countries recognize the state of Palestine and it’s high time we reflect this on the ground.”

Palestinian leaders, however, have yet to issue an official statement to that effect.

The words of Shtayyeh, who is close to Palestinian President Mahmoud Abbas, reflect the state of despair and frustration plaguing the Palestinian leadership because there have been no real breakthroughs in the peace process with Israel. Palestinians believe that US President Donald Trump’s administration has failed to pressure Israel to stop its settlement measures and its attempt to impose a fait accompli in the West Bank and Jerusalem without coordinating with the PA.

However, Abdullah Abdullah, a member of Fatah’s Revolutionary Council and chairman of the Palestinian Legislative Council’s Political Affairs Committee, spoke with Al-Monitor about the situation.

“Palestinians will not commit unilaterally to political agreements while Israel is not adhering to any," he said. "At the same time, we are well aware that we cannot declare a Palestinian state alone, in light of a US veto that awaits us at the UN Security Council. However, we will have a new policy, which has yet to be set forth, whereby we will galvanize the international community into pressuring Israel. At the same time, the PA will not give up its tasks in providing services to our people through the ministries and institutions. However, we will follow a different political path, whose sides are still not clear and [which] is still debated by the Palestinian leadership.”

As Fatah officials talk about reinventing the PA and changing the image it has had since it was established in 1993, more Palestinians have come to criticize its performance. According to an opinion poll conducted by the Jerusalem Media and Communications Centre in September, 54% of Palestinians in Gaza and the West Bank consider the PA's performance to be poor; still, 65% oppose its dissolution.

The New Yorker magazine reported in August that the PA is taking its last dying breath and noted that Abbas’ popularity has declined significantly because he opposes the “armed struggle” against Israel and continues to cooperate with Israel on security matters. Palestinians have lost confidence in their leadership, which has failed to make any political breakthroughs.

“What used to be a vibrant if fractious political debate, nourished, tolerated and often exploited by the leadership, has turned into a dull and dismal discourse, steered by political directives, and driven by fear of suppression and the loss of position inside an ever-swelling bureaucracy," The New Yorker said. "The PA has become more and more reliant on the flow of funds from the US and the European Union, and on Israel’s goodwill in dealing with the daily needs of the Palestinian population in the territories."

But the kind of change being discussed isn't really feasible, said Raed Nairat, a political science professor at An-Najah National University and head of the Nablus Contemporary Center for Studies and Policy Analysis.

“The growing talk by Palestinian officials about changing the PA’s function is practically unrealistic. The PA cannot reinvent itself now, even if it wants to, given its minimal financial capabilities. The PA is standing still without any serious review of its performance and future policies. These talks are wishful thinking," Nairat told Al-Monitor.

There is other talk, however — disturbing talk. Israel and the United States are discussing alternative options to a Palestinian state, such as establishing a self-rule enclave or a confederation with Jordan. This is not to mention that the Jewish National Union Party, a partner in the Israeli government, approved Sept. 13 a plan to deport Palestinians from the West Bank in exchange for financial compensation. While he did not comment on the plan specifically, Prime Minister Benjamin Netanyahu sent a traditional congratulatory message to the party convention where the plan was approved.

The Jewish National Union Party’s political discourse represents the far right and does not recognize the PA. The party has been working to dissolve the PA, calling upon the Israeli government to stop transferring funds to the PA.

Tayseer Nasrallah, a Fatah Revolutionary Council member in the northern West Bank, told Al-Monitor, “Since its establishment 24 years ago, the PA has been offering security services to Israel and municipal ones for Palestinians. This policy should come to an end. The international community must understand that we need to change this situation. We are well aware of the Israeli lobbying to maintain the status quo, which serves it well.”

A Palestinian minister who refused to be named told Al-Monitor, “During the weekly meetings, the [Palestinian] government has been studying the political situation, but Abbas has yet to give an order to take actions on the ground, despite the leaks and reports. Any new policy for the PA in the West Bank necessitates field plans to be implemented on the ground, which are not available."

The Palestinian situation is worsening in the face of an unprecedented political stalemate with Israel, which could push the Palestinian leadership to threaten more revolutionary actions, such as dissolving the PA. Perhaps this revolutionary rhetoric could restore the popularity of an authority that has lost its momentum and public support. Yet this bold step remains far-fetched, given the PA’s almost complete reliance on external support and funding.

Correction: Sept. 25, 2017. An earlier version of this article erroneously stated that Netanyahu had blessed the National Union Party's plan to deport Palestinians. Netanyahu only sent a congratulatory message to the convention where the plan was approved.