Are warnings about Islamic State in Palestine 'empty threats'?

In light of reports about the possible collapse of the Palestinian Authority, officials have been warning that the alternative to President Mahmoud Abbas could be the Islamic State, though not many observers seem to take the idea seriously. 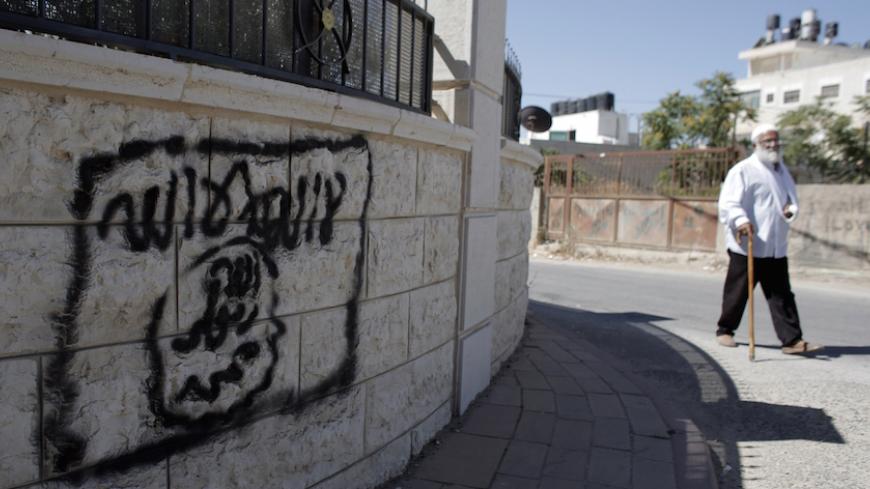 In light of Israel’s increasing military incursions in the West Bank in response to the ongoing uprising, there has been growing talk since the end of November about the possible collapse of the Palestinian Authority. Democratic presidential candidate Hillary Clinton warned Israel Dec. 6 that the alternative to President Mahmoud Abbas "could be the black flag of [the Islamic State].”

Palestinian chief negotiator Saeb Erekat surprised observers by warning Dec. 12 that IS will gain further support in the Arab world should Israel continue to obstruct the establishment of a Palestinian state. According to Erekat, should the PA dissolve, IS will take the place of moderate Palestinians and start killing Israelis.

Mohammed Shtayyeh, a member of the Fatah Central Committee, stressed Dec. 10 that there are no cells affiliated with al-Qaeda or IS in Palestinian territories so far, but any attempt on the part of Israel to attack the PA could change the current equation. Some consider his words a threat that IS will attack Israel should the PA collapse.

Hafez Barghouti, the editor-in-chief of al-Hayat al-Jadida who has close ties with the PA leadership, said Sept. 11 that IS will be the alternative should the PA collapse and Palestinians would be left alone to fight the Israeli forces. He added that IS could attack Israel in an attempt to gain popularity among Palestinians.

These statements are striking, coming from prominent officials in the PA. Some suspect that they were coordinated with Abbas in person to try to pressure Israel to return to the negotiating table after a hiatus of several years and to warn Israel that any alternative to the PA could lead to IS — a risk Israel is not willing to take.

A Palestinian security source wishing to remain anonymous was quoted by Yedioth Ahranoth as saying Dec. 25 that 22 IS activists had been arrested in the West Bank and held under administrative detention. The individuals came from the towns of Qalqilya and Bethlehem, the report stated.

But this talk of IS being the only alternative to the PA may not be accurate. Other Palestinian factions such as Hamas and Islamic Jihad may also be alternatives, despite Israel’s clear rejection of these factions. On Dec. 16, analysts speaking to Israel Today expressed fears about Hamas’ potential control over the West Bank should the PA collapse.

On Dec. 26, Abu Bakr al-Baghdadi made an unprecedented threat against Israel, saying that Palestine will be the graveyard rather than the state of the Jews. Perhaps this belligerence lent a little more credibility to the PA’s warnings.

Najat Abu Bakr, a member of Fatah’s Palestinian Legislative Council in Jenin in the northern West Bank, told Al-Monitor that the ideas of IS are spreading among Palestinian women in the West Bank. She said she has noticed in her daily encounters during lectures and seminars in rural areas that these women have adopted religious ideas promoted by IS.

“At the same time, however, the PA’s warnings about an imminent danger from IS are not true and might have been orchestrated by some Palestinian officials to pressure Israel to make further concessions in future negotiations,” she said.

On Dec. 27, the Hebrew-language news site Reshet Bet revealed that Israel had rejected a proposition by the PA in July 2015 to enter secret negotiations on the demarcation of the Palestinian state’s borders.

A survey conducted by the Arab World for Research & Development in July 2015 showed that 93% of Palestinians in Gaza and the West Bank believe IS does not represent true Islam and that its practices as portrayed in the media are not justifiable and not grounds for building a true Islamic state. Nevertheless, some Palestinians may be inclined toward IS, especially uneducated women living in rural areas, where polls cannot reach.

In light of the expansion of Islamic organizations in general, and IS in particular, there is a chance of a large-scale armed operation against Israel. However, should this scenario play out, Israel is likely to point the gun at West Bank Palestinians who are not remotely associated with IS.

Others on the Palestinian scene are unmoved by the talk about the potential emergence of IS in the West Bank.

Nayef Rajoub, a senior Hamas leader in the city of Hebron, told Al-Monitor, “The PA’s warning about IS cells in Palestinian territories are not serious. They aim to accentuate the PA’s tutelage and control of the Palestinian people. This was the case of Afghan President [Hamid] Karzai, who called on Jan. 4, 2012, for the support of the international community for fear of the Taliban’s rise in his country in light of the failure of the Afghan state’s political and military efforts. This is not to mention the warnings of former Iraqi Prime Minister Nouri al-Maliki about the return of the advocates of former Iraqi President Saddam Hussein to Iraq’s political arena. Palestinians in the West Bank and Gaza are not mentally or ideologically inclined to accept the ideas promoted and espoused by IS — although some Palestinians individually support IS’ ideas. However, the PA is circulating such warnings to pressure Israel not to sever ties with it.”

The PA may believe that IS does not pose an actual threat to Israel, for IS militants have been deployed since 2011 on Israel's southern border in the Sinai Peninsula and in the north in the Syrian Golan Heights for years, and have conducted no armed attacks on the Israeli forces.

Israel, on the other hand, considers the real threat to be the armed Palestinian factions, particularly Hamas. Over the past few weeks, the Israeli security forces have been making concerted efforts to contain Hamas. Israel announced the arrest of a Hamas-affiliated armed cell in Jerusalem on Dec. 26.

Abdel Sattar Qassem, a political science professor at An-Najah National University in Nablus, told Al-Monitor, “The PA’s warnings about the emergence of IS are empty threats. Israel’s intelligence and security apparatuses and sources are far greater and more advanced than the PA’s. In fact, Israel should be the party to sound the alarm and warn the PA about any imminent threats by IS, not the other way around. Therefore, it shrugged off all warnings to this effect. With these claims, the PA is trying to present itself as part of the international and Islamic coalitions against IS.”

The West Bank is under the control of three powerful security forces: Israel, the PA (through coordination with Israel) and Jordan. For IS to emerge and grow in the Palestinian territories does not seem plausible in light of the tight security grip and the security coordination between the three parties. This is true despite the emergence of a few cells, such as the one that was dismantled in the West Bank in March 2015, or the arrests of individuals espousing the group's ideology. But these militants have not been able to take action on the ground in the absence of a supporting organizational structure.

Palestinian and Israeli decision-makers may not have a unified stance about the IS risk in the West Bank. The PA warns Israel about IS’ potential rise should it collapse, while Israel does not show any sign of concern. However, it is in the interest of both parties not to allow IS' emergence in the West Bank despite their political differences.