Will PA security turn on Israel?

Despite recommendations from military quarters that Israel strengthen the Palestinian Authority and work with it to quell the ongoing violence, Israeli officials fear attacks from the Palestinian security forces themselves. 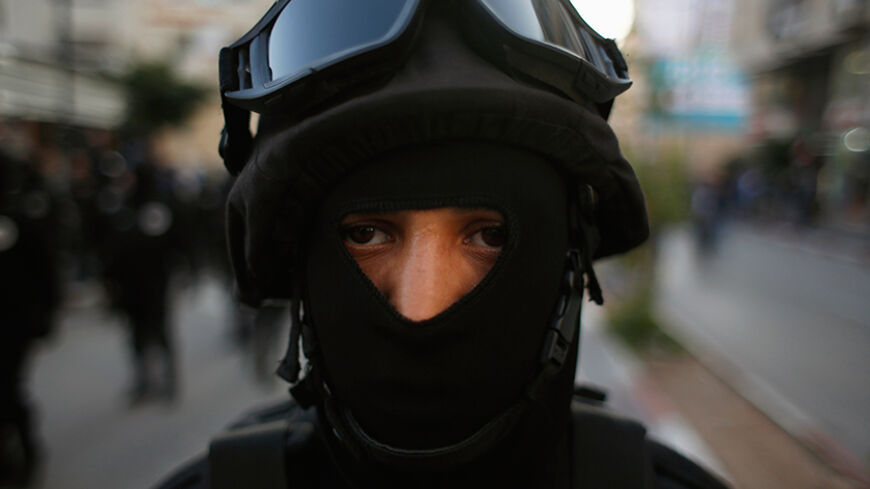 A member of the Palestinian security forces takes part in a rally marking the 50th anniversary of the founding of the Fatah movement, in the West Bank city of Ramallah, Dec. 31, 2014. - REUTERS/Mohamad Torokman

RAMALLAH, West Bank — Israel is convinced that new developments are about to take place in the West Bank, especially after the killing of Mazen Arabia, a Palestinian intelligence officer accused of opening fire at the Hizma military checkpoint, northeast of Jerusalem, injuring an Israeli soldier Dec. 3.

According to the Arutz Sheva, Arabia approached the checkpoint, pulled out his weapon and started shooting at the soldiers, who responded in kind. Meanwhile, no Palestinian party has confirmed the incident, as the area in which the shooting happened is controlled by Israel.

This incident, the first of its kind during the uprising in the Palestinian territories, sparked Israeli concerns that other armed Palestinian security officers will engage in similar acts. Therefore, the Israeli government rejected the recommendations of the Israel Defense Forces on Nov. 25 to supply the Palestinian security apparatus with weapons and ammunition to be used to control the situation in the West Bank and face any security developments stirred by Palestinian protesters.

Yedioth Ahronoth reported Dec. 5 that the Palestinian security forces have been very concerned following the Hizma checkpoint incident. According to the newspaper, the Palestinian Authority’s security apparatus informed Israel of its intention to investigate the incident and take all necessary measures to prevent such an occurrence. Maj. Gen. Adnan al-Damiri, the PA’s security services spokesman, denied these statements to Al-Monitor.

The Yedioth Ahranoth article stated that the PA’s security apparatus will open an immediate investigation into the incident and closely monitor its members internally to thwart any potential military operation against Israel. Meanwhile, the security leadership agreed to arrest anyone attempting to carry out such acts on the grounds that containing the security situation is a top Palestinian interest, according to the newspaper.

As for the Hizma checkpoint incident, Damiri said the Israeli security services were the ones who announced Arabia's death without involving the Palestinian security forces in any investigation. He also stressed that the narrative concerning incidents in which Palestinian citizens are shot by the Israeli army are one-sided accounts, with no other party to confirm or deny them. According to him, Israel is making up pretexts to kill Palestinians and refuses to involve the Palestinian security apparatus in the investigations of these incidents.

Damiri believes that Israel is trying to find excuses to destroy Palestinian institutions as it did back in 2002, during the military invasion of the West Bank after the bombings by Palestinian factions from the West Bank. Israel has been also refusing to allow the PA to receive military equipment and weapons donated by many Arab countries and Russia. Notably, 50 armored vehicles donated by Russia are still in Jordan, as is other equipment not considered military combat gear, such as bulletproof vests.

Damiri stressed that the security services are regular forces and not militias, taking orders from the Palestinian political body — the PA command and the government — with one goal: the protection of Palestinian citizens by all means available. The Palestinian security services ensure security and order and solve conflicts between the inhabitants of the West Bank cities, yet officers remain in their headquarters when the Israeli military raids a city.

He added that security officers also have been refraining from shooting into the air during the funerals of their relatives killed by Israeli bullets, for fear of punishment. He also stressed that his colleagues do not even express in private conversations the desire to take retaliatory actions against the Israeli forces.

In the same vein, several Israeli political analysts have said that the PA’s security apparatus has begun to disintegrate and that the Hizma checkpoint incident is a turning point and the beginning of the PA’s collapse.

Avi Issacharoff, a reporter for the Israeli news site Walla, raised questions about the PA’s refraining from condemning the incident in his article published Dec. 8. “Is the PA no longer against the operations by members of the Palestine Liberation Organization and its security forces?” he asked, stressing that Israel fears that members of the Palestinian security forces will start conducting individual operations, which would lead to further killings in the ranks of Israelis.

Issacharoff added that these security officers are likely to participate in the popular outburst of protests as the killings continue and their relatives are shot by the Israeli military. He stressed that these actions, should they happen, would be carried out individually and not on the orders of the PA, which does not wish to escalate matters with Israel.

Okar also said that Israel’s fears remain centered on incitement against the PA’s security apparatus as it searches for justification for greater use of military force against the young Palestinians taking part in the protests.

Ultimately, the actual engagement of the Palestinian security forces in the ongoing protests against Israel remains limited to its regular daily tasks of ensuring security and order and solving conflicts between inhabitants. This responsibility includes protecting Palestinian hospitals. An Israeli security unit stormed al-Ahli Hospital in Hebron on Nov. 12, killing one citizen and kidnapping another and prompting Palestinian Prime Minister Rami Hamdallah to order the security forces to provide protection to hospitals.