Israel and Hamas are directly and indirectly discussing the possibility of a long-term truce, and their main point of convergence is the quest to weaken the Ramallah leadership. 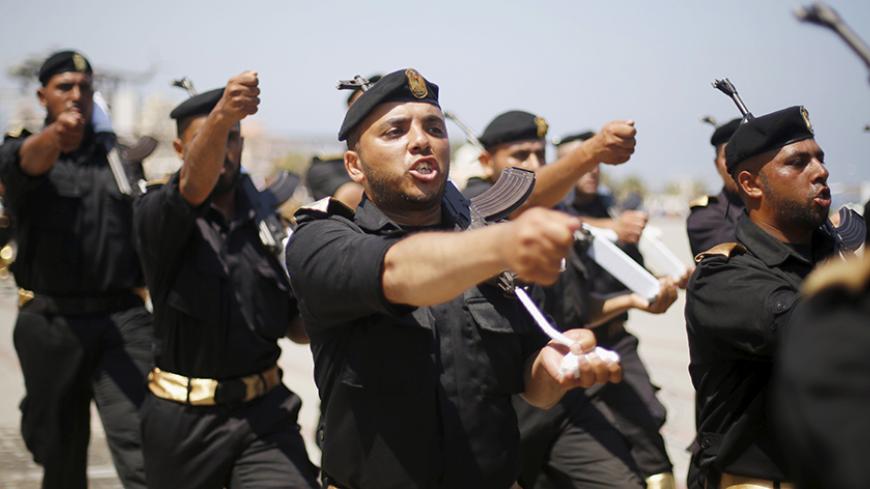 Middle East newswires are humming with news flashes about ongoing Israeli-Hamas contacts, aiming to bring about a long-term truce in exchange for the economic rehabilitation of the Gaza Strip. Reports on the matter are sometimes conflicting. Nevertheless, we have yet to hear a clear denial from the Israeli government about such negotiations. Former Foreign Minister Avigdor Liberman has accused Prime Minister Benjamin Netanyahu several times of "surrendering to terror," and rumors about such contacts have continued to spread in the Israeli media.

A well-informed source close to Netanyahu told Al-Monitor on condition of anonymity that messages about an eventual truce deal are indeed being passed between the prime minister's and defense minister's offices and the Hamas leadership in Gaza — mostly indirectly through the Egyptian intelligence services, but also directly between Israeli and Palestinian security forces on the ground. Furthermore, the topic was also raised in the June 22 talks between Turkish and Israeli Foreign Ministry officials in Rome.

According to a senior official in the Palestinian Authority (PA) who asked that his name be withheld, the political leadership of Hamas inside and outside Gaza favors seriously exploring the possibility of a truce. Hamas, according to this source, is demanding the establishment of a Gaza international airport and harbor and also the around-the-clock opening of the crossings with Israel and Egypt for the movement of goods into Gaza in return for a long-term truce. The source, who visits Gaza regularly, said that there are still major gaps between the positions of Israel and Hamas, which rejects several Israeli demands. Any talk of missile disarmament or halting the construction of tunnels is taboo, as far as Hamas is concerned. In exchange for the Israeli request for the return of the bodies of the two Israel Defense Forces soldiers who died during the 2014 Gaza war, Hamas demands a prisoner exchange like the one that took place in 2011, when abducted soldier Gilad Shalit was released. On its side, Israel agrees only to a floating harbor that would be established offshore and to a more limited opening of the crossings. It also insists on the return of the remains of the two soldiers.

While the gaps between the two parties are apparently substantial, the picture that emerges from conversations with these sources is nevertheless one of a convergence of interests between Israel and Hamas. Hamas is interested in reconstructing Gaza economically to bolster its legitimacy among Gazans, while it continues to prepare for the next confrontation with Israel. Hamas also sees a truce deal and the economic stabilization of the Gaza Strip as a trump card against the more isolated Palestinian President Mahmoud Abbas and the Fatah movement. Hamas' bitter relations with Cairo can only be resuscitated by a truce with Israel, since it is in Egypt's interest to maintain the cease-fire. It is also in Hamas' interest to revive the dormant European donor community and convince it to invest in the economic development of Gaza. A truce with Israel could have exactly that effect.

As for Netanyahu, it is in his interest to avoid yearly military conflicts with Hamas and the ongoing missile attacks on Israeli cities. Politically, in his heart of hearts, he probably prefers a strengthening of Hamas at the expense of Abbas and Fatah. As long as he can address only the Gaza issue and avoid dealing with the future of the West Bank, he is ready for tactical concessions. While he warns against Hamas rule in the West Bank (calling it a future "Hamastan"), he is ready for just that in the Gaza Strip, all to secure his hold on the West Bank and a coalition with the Israeli right.

The Egyptians have recently softened their attitude toward Hamas, wishing to break the Hamas-Tehran link. The issue reportedly came up in the recent meeting between Egypt's Foreign Minister Sameh Shoukry and Saudi Arabia's Adel al-Jubeir in Cairo on May 31. Cairo is demanding that Hamas stop its support for terror acts in the Sinai desert against Egyptian troops, and is ready to open the Rafah crossing more frequently in return for a deal on the issue.

As to the European Union, according to diplomatic sources in Brussels who talked to Al-Monitor on condition of anonymity, the major European countries are ready to accelerate their economic assistance to Gaza, but not as a unilateral act on their side. It must be part of a larger framework that includes negotiations with the PA on Palestinian statehood.

It is hard to see at this point an agreement on a long-term truce between the parties, as each leadership looks primarily to satisfy its national constituency. Yet, a process has begun that may lead to an informal arrangement between Israel and Hamas.

This Israeli policy is consistent with Netanyahu's "no two-state solution" policy. Israel should talk to Hamas only on tactical arrangements, and the real negotiations and agreements must be done with Abbas and the PA on a two-state solution. At this point, the only two states Netanyahu seems to agree to is Israel and a quasi-state in Gaza.