Regional capitals are seeing intense diplomatic activity, while regional powers and Washington agree on the need to end the war in Gaza as soon as possible. 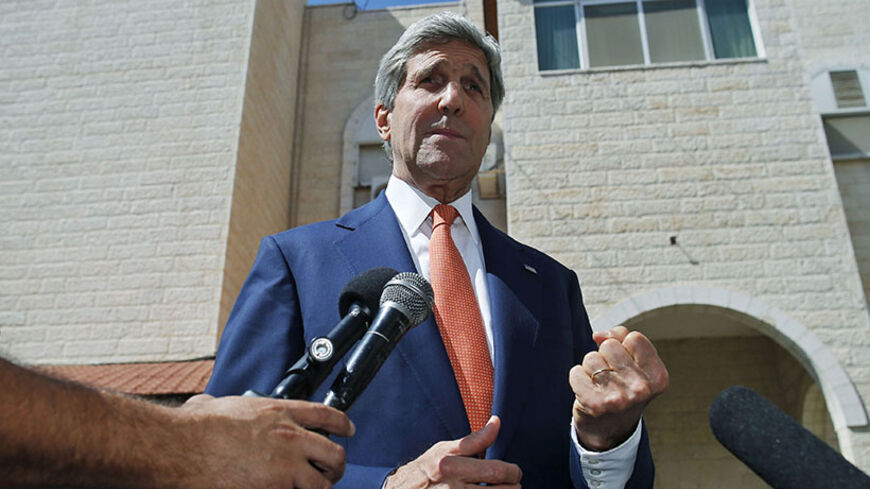 While the Israeli army’s military operations against Gaza enter their third week, a diplomatic flurry is taking place in attempts to reach a cease-fire.

The most recent of these efforts was announced by Palestinian Authority (PA) President Mahmoud Abbas on July 22 during a speech in Ramallah, in which he announced his visit to Egypt and the holding of talks among Egyptian President Abdel Fattah al-Sisi, Islamic Jihad and Hamas. Abbas also traveled to Turkey and Qatar, where he met with the head of Hamas’ political bureau, Khaled Meshaal, in an attempt to reach a cease-fire.

Afterward, the PA held an urgent meeting in Ramallah on July 23 and issued a solidarity statement with Gaza, denouncing the “crimes” of the Israeli army, and affirming that efforts aiming to reach a cease-fire were ongoing.

A prominent official at the presidency headquarters in Ramallah told Al-Monitor, “Abbas suddenly ended his visit to Saudi Arabia and came back to Ramallah on July 22. In the past hours, he intensified calls with the region’s leaders to conclude a cease-fire in Gaza based on the Egyptian initiative, while adding some amendments with the consent of all parties.”

The head of Meshaal’s bureau told Al-Monitor over the phone that Meshaal “will hold a press conference on July 23 in Doha in light of the diplomatic movements aimed at stopping the continuous aggression toward Gaza,” without revealing further details.

The surprise visit of the emir of Qatar, Sheikh Tamim bin Hamad Al Thani, to Saudi Arabia to meet with the king on the night of July 22 hastened the announcement of the truce. The visit aimed to reinforce the attempts of Qatar at reaching a cease-fire agreement between Israel and Hamas.

Moreover, Turkish Prime Minister Recep Tayyip Erdogan called a number of leaders, including the Qatari emir, Abbas, Meshaal, UN Secretary-General Ban Ki-moon and the French and Iranian presidents on July 17 to stop the war on Gaza and reach a truce.

A prominent Palestinian official told Al-Monitor that Turkish Foreign Minister Ahmet Davutoglu's phone calls with Abbas and Meshaal on July 15 attempted to reach a unified stance toward Israel and find a common ground for the conditions of the truce. This was done out of Turkey’s desire to usher in a sense of Palestinian achievement by making Israel respond to the demands of the Palestinians.

Israeli Foreign Minister Avigdor Liberman, however, accused Qatar and Turkey of foiling the Egyptian truce initiative, knowing that the Egyptian initiative was the only proposed document on the diplomatic scene, to which Israel agreed to without reservations, whereas Hamas refused.

Meshaal refused to visit Cairo to discuss the Egyptian initiative, which added to tensions between both parties.

Izzat al-Rishq, a member of Hamas’ political bureau, affirmed in a phone call to Al-Monitor that Hamas responded to the invitation, saying that its stance was well known in terms of the Egyptian proposal. It refused it for subjective reasons, yet it did not refuse the Egyptian role. At the same time, Hamas is ready to cooperate with any movement or party to achieve the demands of the Palestinian people.

A Qatari diplomatic source told Al-Monitor that in recent days, Qatar has been transformed into the center of the diplomatic flurry aiming to reach a cease-fire. Doha received numerous international delegates in an attempt to find a common ground between Hamas and Israel.

Abbas arrived in Doha on July 21 and met with Meshaal. Rishq told Al-Monitor that both men “discussed the Egyptian initiative, in addition to the Qatari and Turkish efforts, which may soon yield results.” Yet, the source denied that Meshaal and Abbas agreed on a draft truce agreement.

On July 21, Abbas sent Majed Faraj, the head of the Palestinian General Intelligence Services, and Azzam al-Ahmad, a member of the Fatah Central Committee, to Cairo to inform the Egyptian authorities of his meeting with Meshaal and his vision of a new or amended cease-fire draft.

Turkey did not stand far from the diplomatic flurry. Abbas visited Turkey on July 18 and met his counterpart, Abdullah Gul, and then met with Erdogan to discuss the truce.

Additionally, the emir of Qatar visited Turkey on July 15 and met with Gul and Erdogan to discuss the war on Gaza and a potential draft agreement to end the aggression. In fact, a diplomatic source in Qatar told Al-Monitor that there has been a hotline between Turkey and Qatar since the beginning of the aggression against Gaza to reach a unified stance between the parties.

The United States also took part in the diplomatic attempts. On July 21, Qatari Foreign Minister Khalid bin Mohammad al-Attiyah received a phone call from his US counterpart, John Kerry. On July 22, Attiyah also called Davutoglu. During both phone calls, the developments of the war on Gaza were discussed in addition to the methods to be adopted to end the Israeli aggression.

Kerry also visited Cairo on July 21 and began talks with Sisi, Egyptian Foreign Minister Sameh Shoukry and Secretary-General of the Arab League Nabil Elaraby to bring the fighting in Gaza to a halt as soon as possible.

A prominent Hamas source told Al-Monitor that Kerry communicated with regional circles that hold influence over Hamas to soften its stance toward the Egyptian initiative, and accept it as a preamble for a cease-fire in Gaza. According to the source, “Kerry is trying to achieve a cease-fire for long-term humanitarian reasons without specifying a timetable, ruling out the possibility that Kerry would visit the region and then leave without achieving the goal of his visit, i.e., the cease-fire.”

Mohammad Nazzal, a leading member of Hamas, told Al-Resalah newspaper that his movement does not refuse a truce for a few hours for humanitarian reasons. However, it refuses a long-term truce without responding to Hamas’ core demands.

A prominent PA official told Al-Monitor that the intensive diplomatic activity in Gaza, Ramallah, Cairo and Doha indicates an imminent shift in the current situation as local, regional and international parties have agreed to stop the fighting in Gaza for fear of reaching a point of no return. The source added that Hamas and Israel have been put under heavy regional and international pressure in the past two days to reach a cease-fire.