The Palestinian Center for Policy and Survey Research has released a detailed study on the consequences of the fall of the Palestinian Authority. 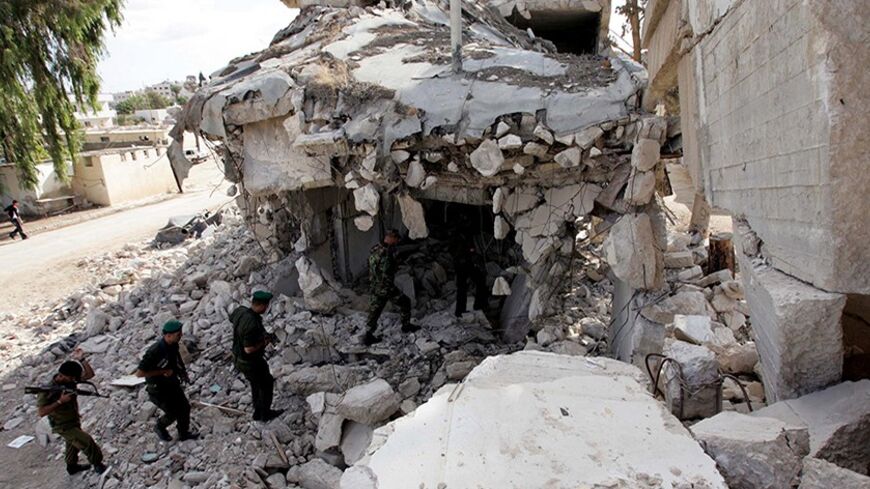 Members of the Palestinian security forces walk amid the ruins of the Muqata in the West Bank city of Jenin, Nov. 12, 2007. - REUTERS/Mohamad Torokman

It was the closest the Palestinians ever came to threatening to dissolve the Palestinian Authority (PA). In December 2012, as a response to the worsening political process with Israel, Palestinian President Mahmoud Abbas said, "If there is no progress in the negotiations, I will call Israel's Prime Minister, Benjamin Netanyahu, and tell him: 'My dear friend, I call upon you to boycott the presidential headquarters in Ramallah. Come take my place. I shall give you the keys and you will be responsible for the Palestinians!'"

Soon after, the Palestinian and Israeli sides started a marathon of intensive negotiations under US auspices. However, pessimism prevailed among Palestinians amid leaks about the stalemate in talks and the possibility that they might fail, despite the upbeat statements of the US sponsor.

In a political reading of the expected failure of negotiations, the Palestinian Center for Policy and Survey Research issued a detailed study on the implications of the collapse of the PA. The study, titled "The Day After: The Initiative for the Collapse of the Palestinian Authority," was put forth in collaboration with the US Middle East Project and the Norwegian Peacebuilding Resource Center.

The study was based on research papers prepared by experts in several areas, workshops and interviews. The preparation of the study took six months, during which 10 groups were formed, each including three experts, academics, senior businessmen, former and current ministers and public figures. The groups prepared 10 papers, addressing 10 different sectors, which were discussed in 12 workshops attended by 155 political and academic figures.

The study discussed a number of essential topics regarding the developments that may unfold in the event of the collapse of the PA or the decision to dissolve itself, most importantly the economic, educational and health repercussions; the effects on the judiciary, courts and infrastructure, security and policies; and the future of the political settlement with Israel.

The study expects Israel to impose financial, administrative and political sanctions on the PA should peace talks fail and relations deteriorate. The study also inferred that the two-state solution would not be viable and therefore the PA's existence no longer necessary. The Palestinian financial and political crisis is likely to be exacerbated, followed by strikes and popular demonstrations against the PA, which might weaken it. Moreover, armed groups are likely to re-emerge, which will further undermine the PA that will no longer be able to perform its anticipated tasks.

In 2012 and 2013, sporadic demonstrations swept the West Bank because of the high cost of living, and high prices due to the financial crisis plaguing the PA.

The center that launched the study is located in the city of Ramallah, central West Bank, and is headed by Khalil Shikaki. In a statement obtained by Al-Monitor, the center said most Palestinians are convinced that Israel believes the PA plays two major roles. The PA exempts Israel from the responsibility of care for the people living under its control, and at the same time it protects Israel from the demographic threat that is reflected in the current one-state reality.

Nevertheless, Israel may resort to sanctions that could, intentionally or unintentionally, lead to the collapse of the PA. This has been recently demonstrated in Israel's threat to cut off the power supply for Palestinians in the West Bank because of their accumulating financial debts.

According to the statement, few Palestinians believe the PA ought to dissolve itself to force Israel to assume its full responsibility as an occupying power. Should the PA collapse or be dissolved, this will deal a severe blow to the Palestinians' efforts at uniting the West Bank and the Gaza Strip. This is especially true if the West Bank came under Israel's total control while the Gaza Strip gained further independence and attributes of a state. The collapse of the PA is also likely to deal a major blow to the approach of Fatah in its conflict with Israel, while Hamas would gain further credibility, as the PA would reject the American-Israeli project to establish a state in the West Bank, which will continue to be separated from the Gaza Strip.

The economic dimension was the most significant theme addressed by the study. The worst-case scenario of the collapse of the PA is the fading of $3 billion dollars of public spending, which will strike a blow to the private sector, resulting in a broad decline of services in the sectors of health, education, communications, water and energy. Moreover, 100,000 Palestinian employees are likely to lose their sources of income, which will raise the unemployment rate to unprecedented levels. The migration of Palestinians to other countries will also increase, and Jordan is likely to witness a noticeable influx of residents from the West Bank.

The study warned against the dangerous high rates of poverty, crime and lawlessness. It also warned that armed militias will enforce the law themselves, which will increase the chances of violent incidents between Palestinians and with Israel. The study considered what was called the "systematic dismantling" of the PA, which might be a way to control the expected armed chaos. However, this does not negate the premise of the collapse of internal security, especially in light of recent complaints about the emergence of armed groups defying the PA in West Bank cities.

Moreover, the study stated that the outbreak of a third intifada may become inevitable. With the collapse of security coordination between Palestinian and Israeli security apparatuses, the Israeli army and settlers will face new threats reflected in the conflict between Hamas and Fatah to gain further popularity by carrying out commando operations against Israel. This is true despite the confirmation of Abbas in late January about the ongoing security cooperation with Israel to track down armed groups.

Hamas to benefit from PA collapse

Although the study was carried out in an academic manner, prepared by experts who are not affiliated with or sympathetic toward Hamas, it showed that the movement will be the biggest beneficiary from the collapse or the dissolution of the PA. This is true because Hamas will reinvent itself and renew its activities in the West Bank, as it will be able to swiftly build its military power and escalate its resistance against Israel, after it has been continuously tracked down by the PA and Israel, as shown in a previous report by Al-Monitor.

However, what is interesting is that the study expects Hamas to preserve calm in the Gaza Strip, refraining from carrying out any armed operations against Israel so as to establish its power. However, the fact that tens of thousands of employees are not receiving their salaries from the PA will pose a great challenge to Hamas.

Amid concerns of security and armed chaos, the study recommends the PA protect the weapons of its security services and store them in areas outside known military facilities, for fear of falling into the hands of armed militias. The PA is also advised to form a government in exile and establish independent local institutions in various sectors, which could contribute to establishing alternative regulatory bodies in the absence of the PA.