With Palestinian elections supposedly in the works, the leadership struggle within Fatah is intensifying in the quest to lead the movement in the post-Abbas era. 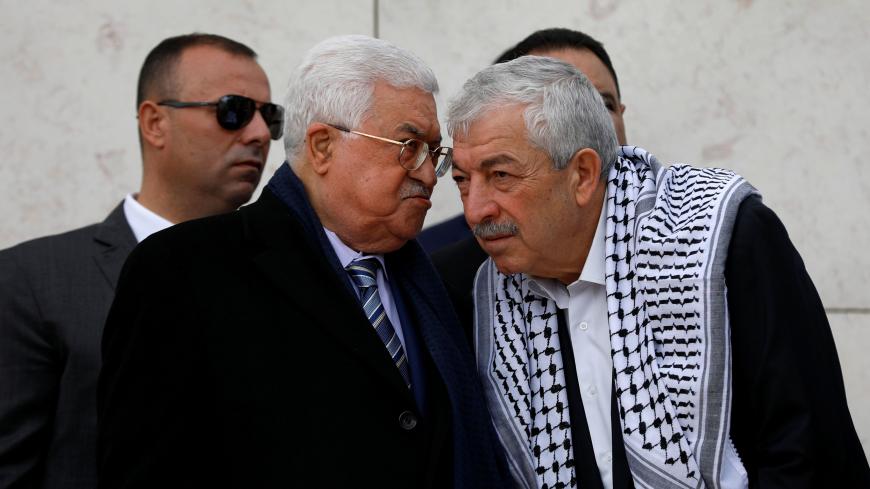 The possibility of holding general elections in the Palestinian territories in 2020 has accelerated discussion within the ruling Fatah movement as to who will eventually replace President Mahmoud Abbas.

A Ramallah-based analyst who requested anonymity told Al-Monitor, “[Key Fatah leaders] are more interested in the succession issue than elections.” The source also asserted, however, “Fatah leaders realize that elections, should they take place, could be a strong indicator of which wing of Fatah is the strongest.”

Al-Monitor contacted various analysts, pundits, observers and Fatah activists to get a sense of the political map within Fatah, and based on their responses, it appears that two groups are likely to emerge as the major wings in the movement in the post-Abbas era.

Abbas himself appears to favor the group headed by deputy Fatah leader Mahmoud al-Aloul, a Central Committee member and former governor of Nablus, Palestine’s leading city and business center. The other group is led by Fatah secretary and former head of the Palestinian Preventative Security Maj. Gen. Jibril Rajoub, who is also a Central Committee member and head of the Palestinian Football Association.

Aloul's has a strong base of support in Nablus and the northern West Bank, including the refugee camps, in particular Balata, the largest of the West Bank camps. Dalal Salameh, the only female member of the powerful Central Committee, is also a supporter.

Meanwhile, Rajoub has attracted backing in the southern West Bank, especially in the Hebron area, as well as among Gazans whose leaders in Fatah support Qudwa and those who support the dismissed Fatah leader Mohammad Dahlan. Backing by Dahlan for Rajoub remains quiet because of its toxicity within Fatah stemming from Abbas' animosity toward Dahlan. Abbas has used all the legal and political means available to keep Dahlan outside Fatah and away from the occupied territories.

While both camps are headed by military leaders largely unknown in outside political and international circles, each has a polished ally — in Aloul's case, Shtayyeh, and in Rajoub's, Qudwa — who can be presented to the outside world as the face of his faction, possibly assuming the presidency, while whoever leads Fatah holds the real power. Given that Abbas occupies three major positions — head of Fatah, chairman of the PLO and president of the state of Palestine — it is possible to satisfy more than one coalition, depending on who wins the coveted position of Fatah leader.

While a number of senior Fatah members, among them PLO Executive Secretary Saeb Erekat, remain unaligned, the person whose opinion really natters is sitting in an Israeli prison. Marwan Barghouti, who received the highest number of votes in the 2016 elections for Fatah's Central Committee, has publicly stated that he wants to run for president despite being in jail. Barghouti nominated himself for the 2005 presidential elections, but according to sources close him who requested anonymity, he withdrew his name after being convinced to do so during a prison visit by Dahlan, at the time a senior Fatah leader.

Some observers believe Barghouti will come out in support of Jibril, who was a fellow leader in the first intifada, but he is yet to stake out a position. Abbas invited Barghouti’s wife, Fadwa Barghouti, a lawyer, to presidential headquarters in Ramallah on Dec. 30, but what transpired during the visit remains unknown. The official Wafa News Agency reported only that discussions between the two focused on the issue of supporting prisoners in light of Israeli and US attempts to deny Palestinian prisoners financial support from the Palestinian government. What sparked interest, however, were the big smiles of Faraj and Sheikh in the official photo with Abbas and Barghouti.

Some argue that the currently prevailing alignments will change if elections take place and assert that the delay in issuing a presidential decree clarifying elections stems from fear that some of Abbas’s close associates might not perform well due to the clouds of corruption and nepotism surrounding some of his aides and supporters.

Polarization within Fatah is nothing new, but it appears to be more entrenched than in the past because of Abbas' age, now 84, and the enormous power associated with the three positions he has monopolized since Arafat's death in 2004.