How Palestinians plan to proceed after Trump-Netanyahu meeting

Despite their disappointment over the declarations by US President Donald Trump after his meeting with Israeli Prime Minister Benjamin Netanyahu, the Palestinians vow to continue their diplomatic efforts. 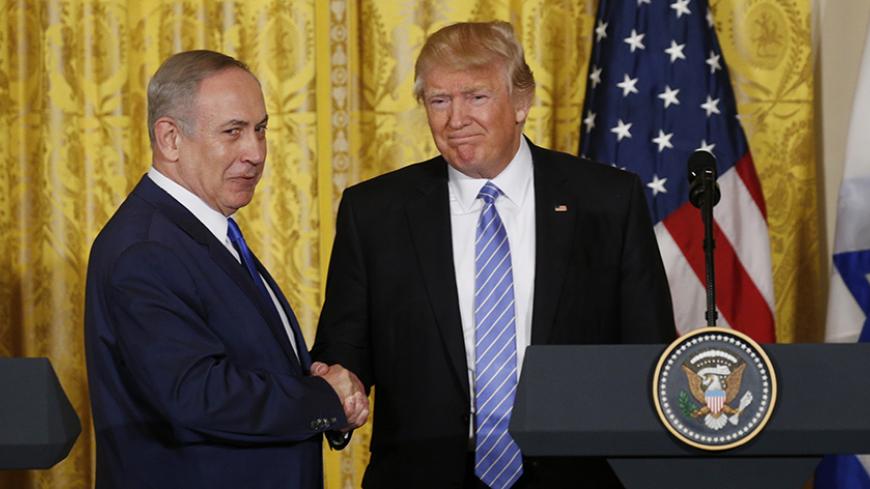 Concluding his Feb. 15 meeting with US President Donald Trump, Israeli Prime Minister Benjamin Netanyahu surely felt satisfied. Back at the official Blair House guest residence, he could have made the Winston Churchill "V for Victory" sign to his entourage; he achieved everything he came for. But the advisers who prepared the meeting are the ones who merit these self-congratulations, in addition to the meeting Trump held on Feb. 9 with Netanyahu’s patron billionaire Sheldon Adelson. Both Trump and Netanyahu hate surprises.

In Washington, Netanyahu received friendly statements and a show of a warm welcome to a major ally; all this was much different than any of the past meetings he had with President Barack Obama.

But beyond these exterior signs, Netanyahu achieved much more. Netanyahu is now reassured that he can continue the current policies of settlement expansion. More so, as far as the Trump administration is concerned, the concept of settlement blocs — generally perceived as east of the separation fence — remains undefined. This clearly indicates the lack of any American obsession with a two-state solution. Netanyahu’s government is now immune to any possibility of a UN Security Council resolution or an effective international intervention in favor of a two-state solution.

On Iran, Netanyahu received reassurances that the United States will adopt more rigid monitoring of the agreement, in coordination with Israel, and that it will initiate new sanctions on Iran’s missile development and Iran’s support of terror. Netanyahu was also told that US security assistance and cooperation will be better than ever. Israel in Trump’s view is again a strategic asset.

According to a senior Ministry of Foreign Affairs official in the know who spoke to Al-Monitor on condition of anonymity, there was good chemistry between the two leaders. Indeed, Trump and Netanyahu are ideological twin brothers. Both thrive on isolation, nationalism and anti-Islamism. Both despise the media, the courts and the left. They both object in similar ways to multilateralism — be it the United Nations or the European Union — and have a condescending view of European leaders. Netanyahu, according to the senior official, did not seek diplomatic overkill such as support for a totally unhindered settlement policy or annexation moves such as the settlement Regularization law, which would have strengthened the stance of Naftali Bennett’s extreme right-wing HaBayit HaYehudi party.

The question now in Jerusalem, Ramallah and other capitals in the region and the international community is what happens the day after, now that the parameters of US-Israeli coordination have been agreed upon, even if details still have to be worked out by the diplomatic working levels.

In Israel, the source claimed, the aim is first of all to strengthen the prime minister’s position domestically, convincing the ruling coalition and public opinion of the “historic achievement” that only Netanyahu can sustain. The prime minister has instructed his close aides to inform the leaders of Egypt, Jordan, the United Kingdom and Germany of the result of his talks. Nevertheless, policy-wise, nothing much will change under a stronger Netanyahu.

As to the Palestinians, none of what happened in Washington this week surprised them. A senior PLO official close to President Mahmoud Abbas told Al-Monitor on condition of anonymity that, despite what seems like US-Israeli collusion, the Palestinian leadership will attempt to engage with the Trump administration on a different set of understandings, leading to a two-state solution process.

According to this Palestinian source, Egyptian President Abdel Fattah al-Sisi, who keeps regular contact with the new US administration, and Jordanian King Abdullah II, who briefly met with Trump on Feb. 2, advised Abbas not to give up on Trump and to engage with the new administration. According to this pragmatic Arab view, one must distinguish between Trump’s White House staff — which includes his adviser Steve Bannon — and the secretaries of state and defense. The natural tensions between the National Security Council and the State Department persists also in the administration. The State and Defense departments are perceived as more pragmatic and open-minded to the Arab view.

The Palestinian source said that the Palestinian leadership will suggest to the US administration a series of confidence-building measures between the Palestinian Authority (PA) and Israel, provided they lead to negotiations for a two-state solution. Such measures would include three main issues: Palestinian economic activity in large areas of Area C related to industry, agriculture, infrastructure and tourism; a settlement expansion freeze; and enhanced security cooperation between Israel and the PA.

The senior official explained, “Trump’s main interest is the defeat of the Islamic State and of fundamentalist terror. This is not achievable without the active cooperation of the pragmatic Arab governments. The route to such cooperation goes through progress on the Palestinian issue.”

Palestinian Security Chief Gen. Majid Faraj will be the central official to engage with the administration, as was agreed in Abbas’ meeting with new director of the CIA Mike Pompeo in Ramallah on Feb. 14, prior to the Trump-Netanyahu summit.

According to the source, these measures must lead to a time line for negotiations for a two-state solution. The PA will even suggest that the United States lead such negotiations and host Netanyahu and Abbas in a summit meeting. The official added that they clarify to the United States that “such a diplomatic move is what stands between today’s status quo and a deterioration toward major violence. Egypt, Jordan and Saudi Arabia will be backing the move.”

On the Israeli side, the foreign affairs source brushed off the Palestinian confidence-building measures proposal, qualifying it as “Palestinian wishful thinking.”