How these Israeli mayors are finding their own path to peace

A group of Palestinian officials have been meeting with Israeli mayors on both the right and the left in an effort to convince them that there is a partner for peace on the Palestinian side. 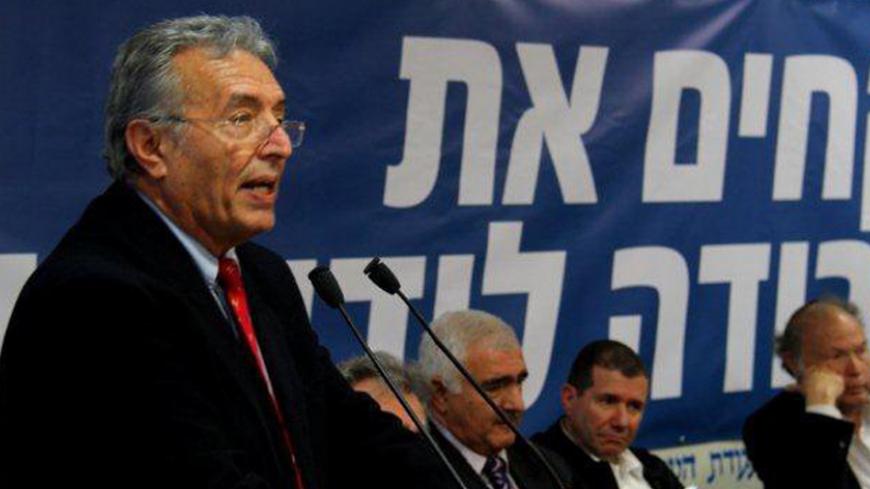 The mayor of the municipality of Ma'alot-Marshiha, Shlomo Bohbot of the Labor Party, speaks during a meeting, July 20, 2011. - Shlomo Bohbot

Just two years after Palestinian President Mahmoud Abbas ordered the creation of the Palestinian Civil Committee for Interaction with Israel, its members can check off one item on their agenda. It was hard, sometimes even Sisyphean, but through sheer determination they came up with a way to circumvent Israeli Prime Minister Benjamin Netanyahu. Now they hope they can convince Israelis that there are people on the Palestinian side with whom they can talk peace. The members of the committee, headed by Mohammed Madani of Fatah’s Central Committee, recently met with Israeli mayors to tell them that the window of opportunity for diplomatic negotiations is closing and that they should take advantage of it before it is too late. Much to their surprise, the mayors were willing to listen.

“There are people in the Likud Party, including some in Netanyahu’s inner circle, who are surprised to hear what we have to say,” said committee member Elias Zenaniri. “They tell us, ‘We didn’t know that things were like that on the Palestinian side.’ Actually, they don’t know anything about us. They really believe that Israel is surrounded by wild animals, like Netanyahu tells them. Then they discover that there are no wild animals on the other side, only people who want to live in peace.”

The last meeting between committee members and a mayor took place about three weeks ago in the Israeli town of Ma’alot. A similar meeting had been held in January in Nes Tziona, with Mayor Yossi Shevo of the Likud. Shevo had been military governor of the Gaza Strip in the 1970s.

As a result of the meeting in Ma’alot, Shlomo Bohbot, the mayor of the municipality of Ma’alot-Tarshiha, proposed a reciprocal meeting in Ramallah between Israeli mayors, regional council heads and Abbas. Zenaniri confirmed to Al-Monitor that the Palestinian Authority has begun preparing for such a meeting and that the Palestinian participants plan to reiterate to their guests that there is a partner for peace.

“I’m ready to go to Ramallah right now,” Shevo told Al-Monitor. “I’ve already submitted a request to travel there, but I have yet to receive permission from the defense authorities.”

Shevo also said that the meetings “are important because they are initiated by the Palestinians," adding, "I am glad that there is a branch of the Palestinian government that promotes dialogue with Israeli mayors and council heads. This is the right kind of initiative, because the only way to reach an agreement is through dialogue.”

According to Shevo, he is not the only Likud mayor whose approach to dealing with the Palestinians is not in accord with the rejectionist diplomatic line espoused by the prime minister. Shevo admits that the political leadership headed by Netanyahu, along with another group in the Likud — the “ideologues,” he calls them —are blocking any diplomatic progress with the Palestinians.

“But that must change,” Shevo asserted. “I may surprise you by saying this, but I support the creation of a seaport in Gaza. It makes no sense to imprison 1.8 million Palestinians in Gaza and then wonder why they launch an intifada. A port in Gaza is important for normalization, both for them and for us.”

In response to the argument that a port would be used to smuggle guns into Gaza, Shevo stated, “It is possible to smuggle weapons in even without a port. Hezbollah doesn’t have a port, and look how many weapons they have.”

Bohbot, a Labor Party member, told Al-Monitor of his desire to engage the Palestinians in a diplomatic process. “Ma’alot is a symbol of coexistence between Jews and Arabs,” he said emphatically. “Ma’alot and Tarshiha are two adjacent towns that live side by side. It could be very symbolic for Palestinians and Israelis to talk, listen and share ideas here in Ma’alot.”

Bohbot said that when the current wave of terrorism erupted last October, he organized a meeting of Jewish and Arab-Israeli mayors and public figures in Acre. After the meeting, they sent Netanyahu and Abbas a letter calling on them to renew peace negotiations.

“Abbas congratulated us on the meeting and the initiative, but unfortunately, we have yet to receive an answer from Netanyahu. He is surely not interested,” said Bohbot, clearly disappointed. “It was a call from lots of mayors, Jewish and Arab alike, from both the Likud and the Labor parties.” It was after sending the letter that Bohbot turned to the members of the Civil Committee for Interaction with Israel to suggest that a meeting similar to the one in Nes Tziona be held in his own town.

“We want everyone in Israel to realize that there is a partner for peace among the Palestinians,” said Zenaniri, who went on to note that the message the Palestinians bring to each meeting is that a two-state solution and an end to the occupation are joint strategic interests for Palestinians and Israelis.

Of course, the big question is whether these local politicians will be able to persuade Netanyahu to renew negotiations. Bohbot believes that the mayors’ role is to bring the two sides closer and to attempt to remove any obstacles along the way. For instance, he believes that Abbas’ insistence on a freeze on construction in the settlements is a mistake.

“I spoke with the mayor of Ma’ale Adumim, Benny Kashriel,” said Bohbot. “He told me that Netanyahu isn’t building in the territories like people think he is. Besides, everybody, including Abbas, knows that the settlement blocs will remain part of Israel under any diplomatic agreement.”

Shevo, Bohbot and Zenaniri agree that there is still a long and tortuous road ahead of them, but Shevo commented, “Someone has to do it. We can’t afford to lose hope.” Meanwhile, Zenaniri summarized his group’s position, stating, “Our goal is to reach every single Israeli, so that they know that people are talking nonsense about us.”