Will US endorse French UN resolution on Palestinian statehood?

In view of the composition of the new Israeli government and its policies, France could replace the United States in leading the efforts to resolve the Israeli-Palestinian conflict, by advancing a UN resolution on Palestinian statehood. 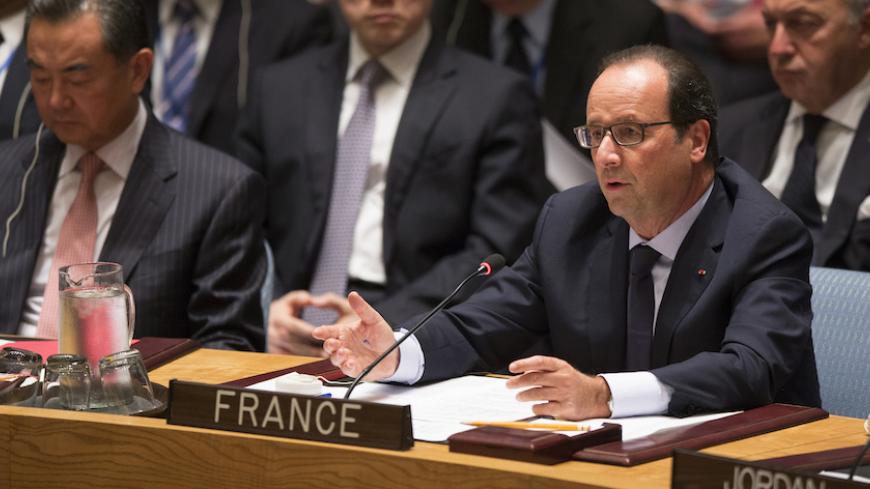 White House spokesman Josh Earnest pledged on May 12 that following “the comments made by the prime minister in the closing days of his election,” the United States would change its approach toward promoting a solution of the Israeli-Palestinian conflict. Earnest was referring, of course, to Prime Minister Benjamin Netanyahu’s comment that a Palestinian state will not be established as long as he is prime minister. The most likely assumption, based on Earnest’s words, was that the president will replace his indulgence of Netanyahu’s procrastination on the process with support for proposals for resolving the conflict. Among other things, the new approach appears to include a freeze of the US veto at the UN and its institutions until such time as Israel deigns to extract the two-state negotiations from the freezer.

Although Earnest stressed that the new approach would not be accompanied by “any broad announcements,” newspapers over the past weekend were full to overflowing with statements regarding the essence of that change. These were made by none other than President Barack Obama, who determines US foreign policy. The new approach was presented in interviews with the London-based Asharq al-Awsat and the Saudi Al-Arabiya TV network, as well as in the statement summarizing the Camp David meeting with heads of the Gulf States.

The central message emanating from Obama’s statements is one of helplessness. According to the president’s diagnosis, “a big overarching deal” is probably not “possible in the next year, given the makeup of the Netanyahu government, given the challenges I think that exist for President [Mahmoud] Abbas.”

“It’s going to take some time,” the leader of the free world opined. Given that it is probably not going to happen within the next year, the president suggested instead channeling efforts toward confidence-building between the sides by such measures as improving the Palestinian economy, tightening relations between the Gaza Strip and the West Bank and institutionalizing trade ties with Israel and global markets. In other words, back to managing the conflict rather than solving it.

Philip Gordon, who served until recently as the White House point man on the Middle East, wrote on May 7 in The Financial Times that the “scope for Washington to make a difference is limited.” Although the United States has a clear interest in Middle East peace, both for itself and for Israel and the Palestinians, “It does not hold the cards that matter, as last year’s monumental but ultimately unsuccessful diplomatic efforts by John Kerry, secretary of state, demonstrated.” Who, then, holds those cards? The former White House official noted that the president has not ruled out handing them over to the UN Security Council, so that it can determine the parameters of a permanent agreement. According to his assessment, such a move will not occur before the end of June — the date set for signing the nuclear agreement with Iran.

The move at the UN has been gaining momentum in diplomatic channels between the Foreign Ministry in Paris and UN headquarters in New York. Last week, a group of former top European officials gave French Foreign Minister Laurent Fabius a boost. Among supporters of the French move was one of his predecessors, Hubert Vedrine, and with him former Spanish Foreign Minister Miguel Moratinos, who also served as the UN’s Middle East envoy. The former diplomatic coordinator of the EU and former NATO Secretary-General Javier Solana, former Dutch Prime Minister Andreas van Agt and former Irish Prime Minister John Bruton are also supportive of this path.

Like Obama and his spokespeople, they, too, believe that Netanyahu’s re-election and the new coalition he has formed require a change in policy toward the Israeli-Palestinian conflict. This change, they believe, starts with Europe moving from the back seat to a front-line diplomatic position and forging an effective and clear European Union policy. In a letter to EU foreign policy chief Federica Mogherini and the foreign ministers of all EU member states, the senior Europeans propose that the union rev up its involvement in the diplomatic process and promote a solution based on the 2002 Arab Peace Initiative.

They urged that the support of European nations should be harnessed for Palestinian inclusion in international conventions and institutions. At the same time, they recommended expanding the labeling of products manufactured in the settlements and finding additional means “of holding Israel to account for the way it maintains the occupation.”

Members of the group expressed doubt that the US administration would lead renewed negotiations between Israel and the Palestinians. But a senior European diplomatic source told Al-Monitor on condition of anonymity that the moves by Fabius were being coordinated with the administration in Washington. According to that same source, the two sides agreed that the resolution regarding acceptance of Palestine by the UN and a timetable for completing negotiations over a permanent settlement would be presented to the UN Security Council in September.

If Netanyahu is counting on a US veto of a resolution on the acceptance of Palestine as a member of the UN, which would make Israel an occupier of another UN member state, he would be well advised to read these sentences in Obama’s interview with Al-Arabiya: “I’ve said to the Israelis, ‘You cannot remain a state that is both a democracy and Jewish if you continue to have this problem unresolved.’ And with respect to the Palestinians, I’ve said that ‘You cannot expect to have a state of your own and the full dignity and respect that is inherent for all human beings if you also don't recognize Israel, because Israel is not going anywhere.’”

It’s hard to believe that the US president, who devoted hundreds of hours to the Israeli-Palestinian conflict, is not aware of the fact that the Oslo Accord is based on Palestinian recognition of Israel. It’s safe to assume that Obama read the phrasing of the Palestinian appeal to the UN seeking recognition of a Palestinian state that would exist in peace and security alongside the State of Israel. The demand to recognize Israel (as opposed to recognizing a state of the Jewish people, as Netanyahu is demanding) is an artificial hurdle, over which the Palestinians and Arab states will easily jump. Obama will thus be able to justify his refusal to veto the French proposal and lend a hand to the internationalization of the conflict and of its solution — a solution that will ensure the existence of a Jewish and democratic state within the 1967 borders, which is recognized by the Palestinians and, with them, all of the Arab world.