Why France believes Abbas is part of the peace problem

France has long understood that Israeli Prime Minister Benjamin Netanyahu rejects its UN initiative, but has only recently realized that Palestinian President Mahmoud Abbas is no longer a part of the solution, but part of the problem. 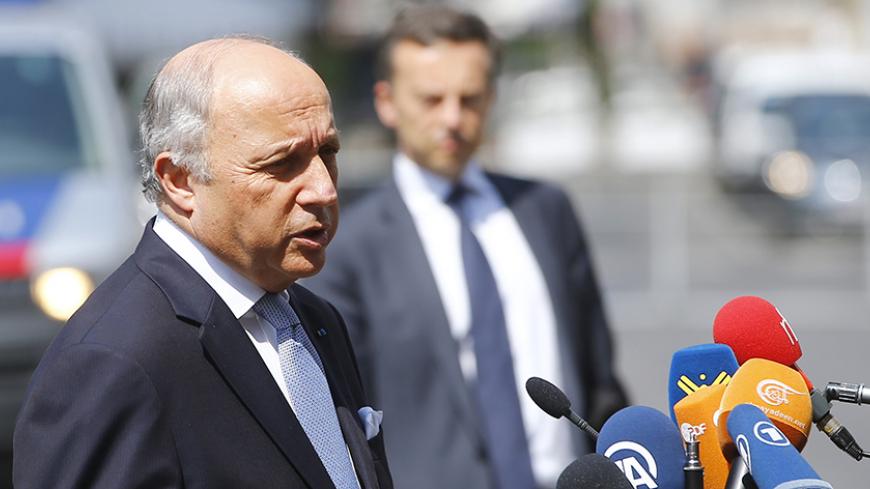 Let's start from the end. Even in 2015, which marks the 10th anniversary of the target date set by the 2003 Road Map of the Quartet (European Union, United States, United Nations and Russia) for ending the Israeli-Palestinian conflict, the flag of Palestine will not be flying outside UN headquarters in New York. French Foreign Minister Laurent Fabius, the man who cooked up the proposed resolution turning the Palestinian Authority (PA) into a Palestinian state, and sought to serve his stew to the UN Security Council, has decided to put his initiative on the back burner, if not in the deep freezer. Israelis who spoke to him at the end of his lightning visit to Jerusalem and Ramallah on June 22 got the impression that the French diplomat had come to the grim conclusion that there are no serious buyers for the initiative on either side.

Fabius did impart to reporters that “[Israeli Prime Minister Benjamin] Netanyahu told me he wants negotiations,” taking the trouble to add, “No, this is not a joke, I’m serious.” But an Israeli diplomatic source with knowledge of Fabius' encounters in Jerusalem and Ramallah told Al-Monitor on condition of anonymity that Netanyahu was mostly interested in expressing his dissatisfaction from the French attempt to bypass the deadlocked negotiations. The prime minister warned his guest that Israel would view UN recognition of a Palestinian state as a severe violation of the Oslo Accord, and would thus consider itself relieved of all its commitments to the PA. Not only that, Netanyahu hinted that he would not hesitate to start a media campaign against the French administration over the Palestinian issue, as he did against the Obama administration over Iran.

Fabius also told reporters that Palestinian President Mahmoud Abbas told him at their meeting that he is willing to return to the negotiating table. On the other hand, on July 7, Palestinian Foreign Minister Riyad al-Maliki announced that the French initiative was off the table and remarked that the Palestinian leadership also had reservations about an alternative French initiative, which exchanges the UN Security Council arena for an international conference that would act to renew negotiations between the sides. In an interview with the official Palestinian radio station The Voice of Palestine, Maliki claimed that France had pulled away from the original initiative under US and Israeli pressure, and concern that dealing with the Israeli-Palestinian conflict would damage negotiations with Iran.

The prolonged negotiations with Iran did not prevent Fabius until now from promoting his initiative. Even Israel’s outspoken objection to the internationalization of the conflict, and the Palestinian reservations about several articles of the French proposal, did not weaken the resolve of the French foreign minister. From the outset, France took into account the fact that Netanyahu will do whatever he can to thwart the initiative of accepting Palestine to the UN, and to blacken the image of the French government. The straw that broke the French camel’s back is the chaos in the Palestinian leadership. The saying uttered 15 years ago by then-Prime Minister Ehud Barak upon his return in 2000 from talks at Camp David with PLO leader Yasser Arafat that “there’s no Palestinian partner,” has become a self-fulfilling prophecy. Abbas, who was for the past decade deemed the ultimate partner for resolving the conflict, has turned from being a central component of the solution to a significant part of the problem.

This diagnosis is shared by senior Palestinian figures, foreign diplomats and Israelis who are in close contact with both. Yossi Beilin, one of the architects of the Oslo Accord and co-author of the 1995 plan known as the "Beilin-Abbas (Abu Mazen) document," wrote a scathing article under the headline “Something is rotten in the Kingdom of Ramallah.” In the opinion piece published July 5 on the i24news website, Beilin wrote that Abbas acts like one of the many dictators of the Arab League states. He cited as an example last week’s decision by the Palestinian president to fire Yasser Abed Rabbo, who was for years one of his closest associates and headed the PLO’s executive committee. He did so without due process and without informing Abed Rabbo of the decision.

Beilin, who is familiar with the intricacies of internal Palestinian politics, noted that Abed Rabbo was dismissed over his ties with former Palestinian Prime Minister Salam Fayyad. Fayyad and anyone close to him became marked men for allegedly being agents of Abbas' greatest rival, former Fatah leader Mohammed Dahlan. After pushing him out of the leadership, Abbas also targeted a nonprofit organization set up by Fayyad for the purpose of rebuilding infrastructure in the PA. “Two Palestinian statesmen noted as independent thinkers and loyal representatives of their people were kicked out of the political establishment for no better reason than the whims of an autocratic leader,” lashed out at his veteran partner the man who for years was Abbas' most ardent advocate. Beilin called on the international community, and especially those states donating vast sums to the PA, to demand explanations of Abbas for his conduct.

The chaos at the top of the PA did not escape the eyes of Fabius and his advisers. The problem is that no one else is keen to jump into the vacuum left by the French withdrawal from its initiative. European officials, just like American ones, have come to realize that they would be politically wise to stay away from this quagmire. The effort to promote a solution to the conflict is thus making way for a search for formulas to manage the conflict. As Shlomi Eldar wrote July 3, a growing number of Hamas leaders are calling for a truce with Israel in return for an easing of the blockade of the Gaza Strip. After his meeting with Netanyahu, Fabius recounted to the media that he had understood that “there are indeed contacts and indirect talks on humanitarian issues and the improvement of life in Gaza.”

Israeli President Reuven Rivlin said this week that “rebuilding Gaza is also in Israel’s interests,” and even Education Minister Naftali Bennett of HaBayit HaYehudi, considered the right-wing hard-liner of the Netanyahu government, told Channel 2 News over the weekend that “it’s time to initiate an international move for the rehabilitation of the Gaza Strip.”

Uri Savir, for years the right-hand man of former President Shimon Peres and his companion in contacts with the Palestinian leadership, wrote in an Al-Monitor article June 30 that Israel must deal with Hamas only on tactical issues, whereas “the real negotiations” of a two-state solution should be conducted with Abbas and the PA. Indeed, the only viable partners — past and present — are the Israeli government and the PA. The US administration was, and still is, the senior referee. Thus, it takes three for this tango: two dancers and a credible referee. Unfortunately, currently, no leader is willing to take upon himself any of these three roles.