Palestinian President Mahmoud Abbas appears to have gone too far, upsetting his European Union supporters, in ordering the closure of the Palestinian Peace Coalition, led by Yasser Abed Rabbo, whom Abbas earlier removed as secretary-general of the PLO's Executive Committee. 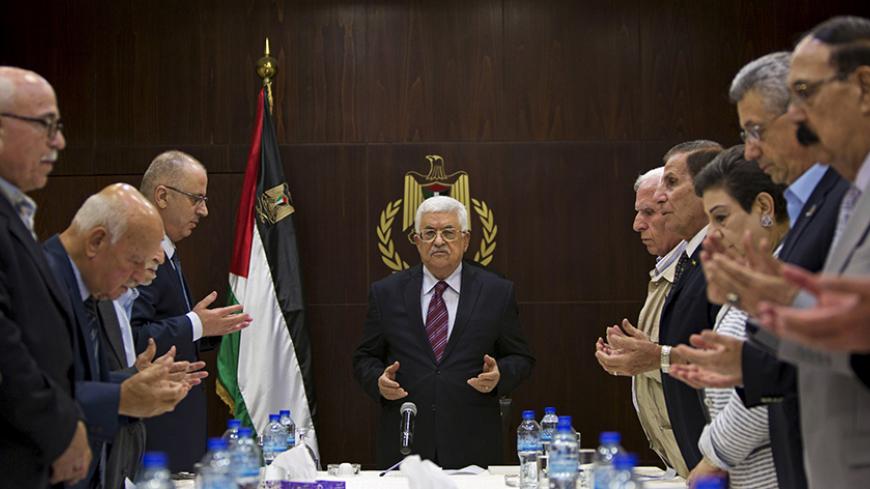 Palestinian President Mahmoud Abbas (C) joins a reading of the Quran prior to a meeting of the Palestine Liberation Organization Executive Committee in the West Bank city of Ramallah, Aug. 22, 2015. - REUTERS/Majdi Mohammed

It took 72 hours for Palestinian President Mahmoud Abbas to grasp that this time he had gone too far. On Aug. 19 in Ramallah, Palestinian security personnel burst into the offices of the Palestinian Peace Coalition, an organization headed by Yasser Abed Rabbo, an Abbas political rival, with a presidential order to shut it down. The coalition works among the Palestinian public to advance the Geneva Initiative and the idea of a two-state solution. The closure order was another move in the all-out war Abbas has declared on Abed Rabbo. On June 30, Abbas had fired Abed Rabbo from his position as secretary-general of the Executive Committee of the Palestine Liberation Organization (PLO).

Unlike Abed Rabbo's firing and the forced resignation of Prime Minister Salam Fayyad in April 2013, shutting down the offices of the Palestinian Peace Coalition elicited angry responses from numerous quarters. The coalition, like the Geneva Initiative office in Israel, is supported by the European Union, which views its activities as one of the last remaining rays of hope for peace in the region. The surprise of Abbas' move was so great because Abbas presents himself as someone who strives tirelessly to advance the idea of peace with Israel on the basis of two states for two peoples, and the Geneva Initiative had received his blessing in the past.

The Geneva Initiative to end the Israeli-Palestinian conflict was formulated by Yossi Beilin, a former Israeli minister and chairman of the Meretz Party, and Abed Rabbo in 2003 in accordance with the 2000 Clinton Parameters outlining a permanent status agreement. The Israeli politician had also been Abbas' partner in 1995 in drafting the framework of understandings called the Beilin-Abu Mazen Document, which also served as a basis for the Geneva Initiative.

One can clearly see Abbas' affinity for the Geneva Initiative and his support of it through the years, but it seems that his political rivalry and fears have overcome the idea of peace and the goal of reconciliation. Abbas is convinced that a group of politicians and Palestinian activists are trying to undermine him, inspired by his biggest political enemy, former senior Fatah member Mohammed Dahlan. This is also the reason why on June 22, the Palestinian Authority (PA) confiscated funds donated from the Gulf states to the Fayyad-led organization Future for Palestine.

The president’s allies allege that Abed Rabbo frequently consults with Dahlan and that he is part of the group trying to undercut Abbas' position. Four days after the order to shut down the Palestinian Peace Coalition, following massive pressure from the European Union, Abbas was forced to find a solution that would distance Abed Rabbo from the group while enabling the coalition to continue its work. Abbas, who cannot live without the economic and political support of the European Union, explained that the order had actually been intended for another organization, the Palestinian Media Center, but that the offices of the Palestinian Peace Coalition, which were part of the center, would continue to function since it is not a political organization.

Gadi Baltiansky, director of the Geneva Initiative, told Al-Monitor that this explanation had been communicated to the initiative's Israeli office Aug. 23 as well as to the initiative’s Israeli and European partners. Abbas even clarified that he gives his blessing to its apolitical activity and that it corresponds with his goals and desires. Baltiansky spoke with Abed Rabbo, his Palestinian partner in the Geneva Initiative, and heard a sweeping denial of the president’s accusations. During the course of the conversation, Abed Rabbo claimed that what Abbas did was patently illegal and that the closure order wasn't legally valid.

In the meantime, the Palestinian Peace Coalition can continue its activity as an independent organization, it seems, on the condition that Abed Rabbo does not take part in it. Nidal Fuqaha, who has worked with Abed Rabbo in the past, will continue to run the office in Ramallah.

A member of the PLO Executive Committee, who spoke on the condition of anonymity in light of the sensitivity of the topic, said that the president is in an unfathomable panic. He suspects Fatah members of political sabotage and of conspiring with Dahlan. According to the source, Abbas can easily dispatch of Abed Rabbo and Fayyad, because they are not in Fatah, and they lack significant supporters. The problem is more serious when it comes to people within the movement who argue that organizational changes must be made in the PLO and Fatah to respond to current conditions. Every such person immediately becomes an enemy and a saboteur. This is also the reason, the source said, for Abbas' reported Aug. 22 decision to resign as chairman of the PLO’s Executive Committee. At the conference of the organization’s national council, which will likely be held in September or October, Abbas will be re-elected to the position, and with the legitimacy gained from his re-election will then silence any criticism.

In the estimation of the Palestinian source, Abbas fears that Dahlan’s people are working with his critics in PLO and Hamas institutions to push him out in a coup. The Palestinian president is worried even more so that someone will try to hold him accountable after he resigns from the presidency. Even now, there are numerous claims that he allegedly took part in corrupt practices.

The fight over succession in the PA has direct ramifications for the authority's relations with Israel. If Abbas neutralizes all possible successors, there won’t be a Palestinian leader on the horizon able to control the violence and chaos that threaten to break out in the territories. The only one who is stubbornly and diligently building his political base is Dahlan, and Abbas can only blame himself for that. The decision to expel Dahlan from Fatah in shame and to force him from PA territory into exile only provided him with more incentive for revenge. Dahlan's base of supporters is growing, and if they have no other choice, Abed Rabbo and Fayyad will join the camp of supporters of the one figure who actually challenges Abbas' rule.