Recent dismissals and appointments among the Palestinian leadership have reignited rampant speculation that President Mahmoud Abbas intends to resign and that the personnel changes are harbingers of who will succeed him. 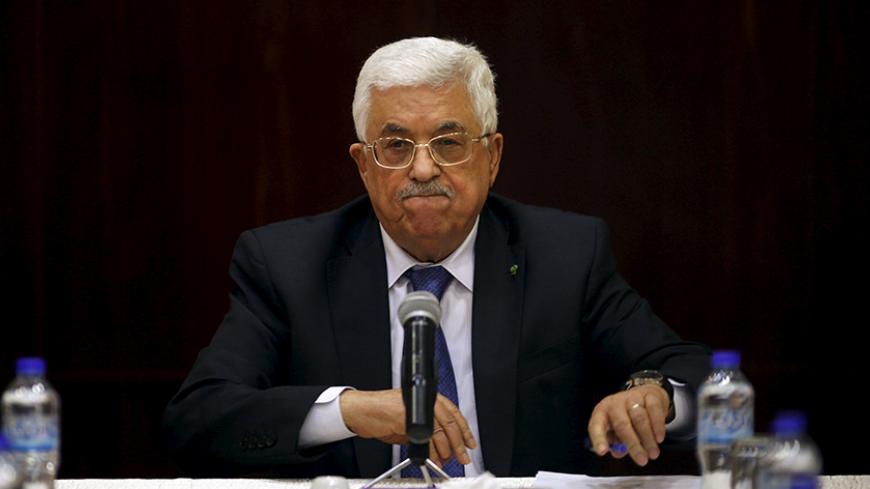 RAMALLAH, West Bank — Leaked information that Palestinian President Mahmoud Abbas allegedly intends to resign and about the identity of his successor has grabbed Palestinians’ attention anew. Abbas has been insisting for some time now that he will not run again to head the Palestinian Authority whenever elections are eventually held, but he has also not appointed a vice president, who would be his likely successor. According to Palestinian law, presidential elections should be held every four years, but the last contest took place in 2005.

On July 26, Israeli Channel 1 quoted close Abbas associates as saying that they expected him to resign in September. In response to the possibility of Abbas' resignation, a PA source speaking to Al-Monitor on condition of anonymity cryptically stated that Abbas has “threatened to take unexpected decisions without disclosing the nature or timing of those decisions.”

Fahmi al-Zarir, deputy secretary-general of Fatah’s Revolutionary Council, told Al-Monitor that the Israeli reports are inaccurate. According to him, there has been no indication that Abbas intends to step down, emphasizing that PA appointments, as well as those for the Palestine Liberation Organization, are subject to laws.

“No one has information, and no one can predict what the president will do in the upcoming period,” said Zarir. “Important meetings will be held this month and next month to discuss all national issues.” Among those slated for discussion are relations with Israel and resorting to international forums to obtain Palestinian rights and goals.

The breakdown of the US-brokered negotiations with Israel in April 2014 had prompted earlier speculation about Abbas' resignation. Abbas Zaki, a member of Fatah's Central Committee, told Al-Monitor, “Abbas is honest with himself. He came to make peace, but he was disappointed by the negotiation process and does not find anything wrong with saying that he will resign. He has suggested it on more than one occasion since the peace process was obstructed a year ago.” He went on, “Abbas reiterates his intention to resign every day. He came [to power] in order to make peace, but today he does not find an Israeli partner. Abbas has offered everything [to make] peace, and today, he wants to say that all options are open.”

Hani al-Masri, director general of Masarat: The Palestinian Center for Policy Research and Strategic Studies, told Al-Monitor, “Abbas has been insinuating that he will resign for years, dissolve the PA and hand it over to Israel, be it privately or openly. Yet, for all practical purposes, there are no serious preparations for a transition of power after Abbas’ resignation or death. This is why the issue is given more importance than it deserves.”

Abbas’ July 4 decision to appoint Saeb Erekat as acting secretary-general of the PLO Executive Committee, replacing Yasser Abed Rabbo as the organization's second in command, raised speculation that Abbas might be preparing for Erekat to succeed him as PLO chairman or PA president. This decision comes in the context of several previous moves, including the dismissal of Mohammad Dahlan from Fatah's Central Committee in June 2011 and Attorney General Abdel Ghani al-Owiwy's June 21 decision to investigate Future for Palestine — a foundation headed by former Prime Minister Salam Fayyad, considered a potential PA presidential candidate — and freeze $1.6 million of its assets (a decision overruled by court order July 8). Fayyad and Abed Rabbo are considered to be close.

Ahmad Majdalani, a member of the PLO Executive Committee, told Al-Monitor that he does not believe the secretary-general appointment is linked to the succession issue. “A PA [vice president] or PLO vice chairman has not been selected yet, and the appointment of a new Executive Committee secretary-general does not mean that [that person] has to be vice president. It is an administrative, not a political post,” Majdalani said. “Linking the appointment of a secretary-general in preparation for the president’s resignation is Israeli political and media propaganda designed to cause political confusion and suggest that the president is not a partner in peace, and that he wants to resign and give up his responsibilities because he is tired.”

Majdalani went on, “The question of who will be the president’s successor is an objective question, since the president is 81. Yet circulating names [of candidates] is only part of each person’s promotion of himself. Dahlan’s only concern is to promote himself as being the only acceptable and capable presidential candidate. Nevertheless, this will only take place through the ballot box, and the people will choose their president without being dictated to by anyone.”

Highlighting procedural problems with the succession rumors, Majdalani stated, “The appointment [of a PA vice president] requires a meeting of two-thirds of the Palestinian National Council’s members — which is unlikely, because most of the members are either out of the country or deceased — or a law change with the approval of two-thirds of the parliament, which is also impossible because of division and the parliament’s paralysis.”

Zarir also pointed to procedural issues, asserting, “[Fatah’s] Revolutionary Council is not the one to appoint a PA vice president. A committee of the PLO Executive Committee and Fatah’s Central Committee was formed to discuss this matter and submit its recommendations to the PLO Central Council.”

Omar Shehadeh, a member of the PLO Central Council, told Al-Monitor that selecting a vice president had been discussed within Fatah. He believes the succession issue reflects a political and organizational crisis for the movement in particular and the Palestinian cause in general. Yet the issue will not actually be resolved because of internal conflicts and the absence of democratic mechanisms with which to do so. He denied that the PLO Central Council had discussed a formula for resolving the issue.

Masri cited the factors complicating the presidential succession as: “the absence of any mechanism to create the post of vice president; the inability of the Palestinian Legislative Council head Aziz Duwaik to become president, as happened after the death of late President Yasser Arafat, as the PLC is paralyzed; and the absence of vision or agreement within Fatah, which is the largest party and dominates the PA and PLO, on who will succeed Abbas.” Masri noted, “This raises fears that insecurity, chaos or a vacuum will result after the president’s death or resignation in light of the large number of people aspiring to accede to the post.”

Concerning the absence of a successor, Masri stated, “This has given the president double strength and broad powers and stirred the concerns of many parties of not achieving a political agreement with Israel before [Abbas’] departure, especially since they still don’t know who will be his successor.” He added, “The president did not pave the way for his successor, but he has focused on a number of figures who might succeed him. There have been recent signs suggesting a change, with the president’s appointment of Erekat instead of Abed Rabbo. This makes it more probable that Erekat succeeds Abbas in the PLO if not in the PA.”