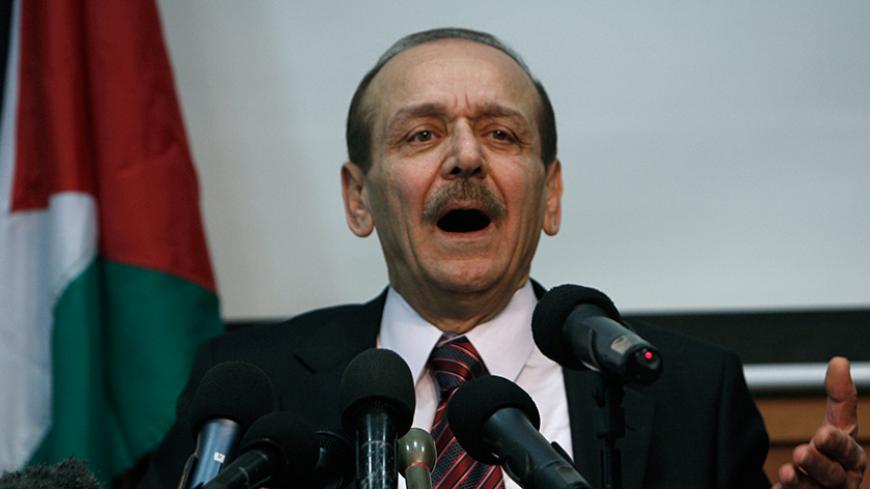 RAMALLAH, West Bank — Yasser Abed Rabbo, former secretary-general of the Palestine Liberation Organization (PLO), launched a scathing critique of Palestinian President Mahmoud Abbas in a lengthy interview with Al-Monitor, accusing Abbas of “one-man” rule. “The executive branch, led by Abbas, is in control of all the institutions — whether they are security, political, economic — and the legislature, which is replaced by decrees issued by President Abbas that affect [everyone’s] life,” Rabbo exclaimed.

Abbas dismissed Rabbo from the PLO’s No. 2 post June 30. According to multiple Arab sources, the leader of the Palestinian Authority (PA) accused Rabbo of conspiring with Mohammed Dahlan, an Abbas rival, in an alleged coup attempt. Rabbo dismissed the rumors of such a plot as a “hallucination.”

“The lines between the PLO, PA and Fatah are increasingly blurred by Abbas,” said Grant Rumley, an expert in Palestinian politics at the Washington-based Foundation for Defense of Democracies, via email. “To fire the PLO’s secretary-general [an independent] and replace him with [Saeb] Erekat [a member of Fatah] while on the cusp of appointing a new PA Cabinet says a great deal about the amount of control Abbas has consolidated in the West Bank.”

Rabbo referred repeatedly and favorably to former Palestinian Prime Minister Salam Fayyad, at one point stating, “We tried to build institutions for the Palestinian state during Fayyad’s time. This had progressed, but sorry to say, my feeling and the feeling of so many Palestinians, is that it was interrupted or frozen to a great extent.”

Nathan Thrall, senior analyst at the International Crisis Group in Jerusalem, told Al-Monitor, “Rabbo’s dismissal had less to do with any perception that he formed a direct threat to Abbas and more to do with his alliance with such figures as Fayyad and Dahlan, both of whom have been vocal opponents of Abbas and wish to replace him.”

Rabbo has served on the PLO’s Executive Committee for 44 years and co-founded the Democratic Front for the Liberation of Palestine in 1968. He also worked as minister of culture and information under Yasser Arafat, from 1994 to 2001.

When asked about the PA’s recent arrest of 250 Hamas officials in the West Bank, Rabbo rejected the claim that the officials represent a genuine security threat. “I am afraid that this was initiated with political motives, as Hamas is doing in Gaza,” he said, also noting the lack of judicial oversight for such measures.

The interview also touched on Rabbo’s suggestion to bring Hamas and Islamic Jihad under the PLO umbrella to solve the ongoing rift with Gaza. Fayyad had also advocated a similar move in a March 3 article with The Elders.

Al-Monitor:  What does the seizure of Fayyad’s funds [from his Future for Palestine group] and your dismissal say about Abbas’ overall leadership?

Rabbo:  We are facing serious problems, and I don’t want to personalize anything. After the split with Hamas, the legislative authority disappeared. There is no parliament, and nobody is questioning anything in our political life. All of the institutions are very weak. They are not doing their role according to the Basic Law. The executive branch, led by Abbas, is in control of all the institutions — whether they are security, political, economic — and the legislature, which is replaced by decrees issued by President Abbas that affect [everyone’s] life. The role of the executive has risen to the maximum. Now, suppose I face a problem. I don’t find a parliament, and sometimes I don’t find a judicial address. As long as this split is going on, our political life to a great extent is paralyzed. I want to take my example as a means of pressure to say that what I faced may be faced by anybody else. What Salam Fayyad faced may be faced by anybody else.

Al-Monitor:  Why were you dismissed from your post as secretary-general of the PLO?

Rabbo:  There was a serious mistake committed. This issue was discussed in my absence. I don’t think this was a very urgent issue, which could not wait until I returned. There was no voting in the Executive Committee, and I don’t want this to be a precedent. Until now, I haven’t received an official notification about this issue from any source. Even this appointment of Erekat, I don’t oppose it. But it should be done the right way. It was done in the absence of the whole body of the Executive Committee. It was just a paper signed by the president and is not a legal way of appointing. This will create problems for him.

Al-Monitor:  Were you surprised by the timing of the decision?

Rabbo:  I am trying to understand, and I am not joking. I don’t know what’s behind this. There were rumors in the media about a plot or a coup. This is hallucination. We don’t exclude some differences concerning how to solve the division of Gaza. Maybe we differ on freedom of expression and freedom of trade unions, but this doesn’t justify anything to take such measures. We differ, and we don’t belong to one party. The composition of the PLO is a coalition of different parties from right to left. This is normal. I have been in the PLO for 40 years, and we always had this tradition of trying to find common ground between different positions. We cannot substitute the concept of a coalition of a national front by a kind of one-man rule, and everyone should obey.

Al-Monitor:  Do you also disagree with Abbas’ struggle against Israel, such as joining the International Criminal Court [ICC] and the UN?

Rabbo:  We don’t have differences about going to the UN or to the ICC. This was done unanimously. The issue is that it is not enough to focus on the international arena if it is not supported by strong conditions internally. The impact of these international achievements will be limited. We tried to build institutions for the Palestinian state during Fayyad’s time. This had progressed, but sorry to say, my feeling and the feeling of so many Palestinians, is that it was interrupted or frozen to a great extent.

Al-Monitor:  Did you support the PA’s recent arrests of 250 Hamas members in the West Bank?

Rabbo:  I am afraid that this was initiated with political motives, as Hamas is doing in Gaza. If someone, Hamas or Fatah, violates the law, there are courts, but I have not seen anyone who was taken to court by us. I won’t be surprised if I see that some people will be released in one or two months without knowing why they were arrested.

Al-Monitor:  How should the PA best solve the ongoing divisions with Gaza?

Rabbo:  ​ My approach is let’s bring all the factions, including Hamas and Islamic Jihad, inside the PLO. We need to have a national unity government with Hamas and prepare for elections. We didn’t try to present a serious plan for reunification, and even when there was an agreement between us and Hamas, we didn’t try to implement it. They want to keep their control of Gaza eternally, and they tried to escape from their commitments, but we didn’t stick to our own commitments.

Even if Hamas offers us today to take security control over Gaza, we shouldn’t do it, because there will be chaos. We don’t have the ability now to just move Hamas away and keep control. We have to find a political understanding for interim steps. It is like [the American Paul] Bremer coming to Baghdad and excluding Saddam Hussein’s army and thinking that someone else will take its place. Iraq’s chaos is still spreading today. We don’t want to do that. It doesn’t mean we will keep things the way they are. Everything should be done on the basis of sharing power. Hamas doesn’t want to share power in Gaza, and Fatah doesn’t want to share power as well.

Al-Monitor:  Given the lack of progress toward reaching a Palestinian state and accusations of corruption within the PA, is Abbas the right person to continue serving as president?

Rabbo:  Politically we need a broader front and reform. This can only be done through peaceful and democratic means. This is the role of the civil society, which is more or less silent. The struggle against the occupation is in many ways connected with how we reform our political and social life. Maybe in the past there was an approach, during Arafat’s time, when everybody should keep silent about problems in the education or social field, because we are facing the occupation, so all of these things should be postponed, and we could wait until we got rid of the occupation. But now people are aware that if we want to fight against the occupation better, we need a better approach toward solving our domestic issues: better institutions, without corruption or a form of one-man rule that is freezing everything, whoever this is.

Al-Monitor:  Media reports have speculated that you were conspiring with Dahlan against Abbas. Is this accurate?

Rabbo:  ​ I don’t belong to Fatah. I [will] always belong to some leftist parties in the PLO. Dahlan is a Fatah member and a Fatah problem. I don’t have ties with Dahlan. But after he was dismissed and left the country, I don’t know why this issue is being raised against me and Fayyad. But a plot, this is hallucination.

Al-Monitor:  What is your future in Palestinian politics?

Rabbo:  I have not [been] dismissed from membership on the [PLO] Executive Committee. I am still a functioning member and have a right to explain my voice.