In an interview with Al-Monitor, Senior Fatah official Jibril Rajoub dismissed calls by colleagues that the Palestinian Authority might be disbanded in response to Israel withholding Palestinian tax revenue. 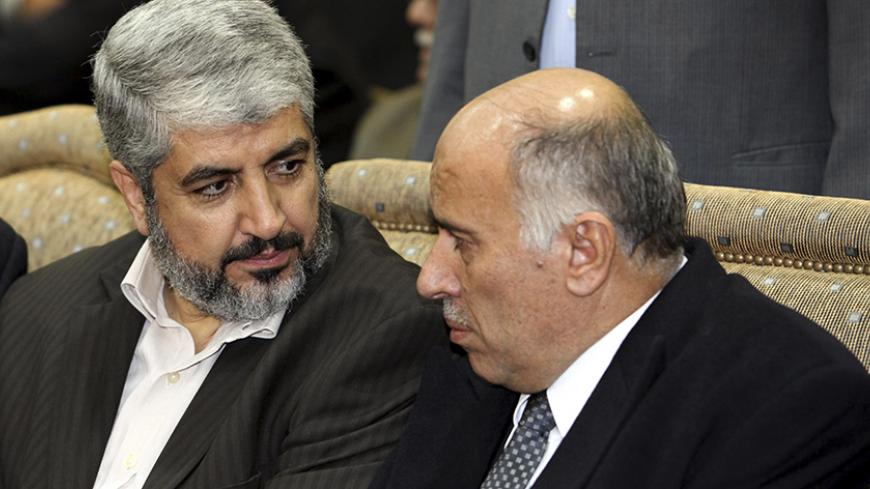 AL-RAM, West Bank — Senior Fatah official Jibril Rajoub ruled out any Palestinian threats to dismantle the Palestinian Authority (PA). In an exclusive interview with Al-Monitor from his office in Al-Ram, Rajoub said, “The PA will never be disbanded. The PA was and will remain a national achievement and national necessity. Dissolving it is not on the agenda of the political leadership.”

Rajoub’s comments contradict repeated warnings from Palestinian officials that they were considering dissolving the PA. The latest warning came Jan. 5 from chief negotiator Saeb Erekat. In April 2014, The New York Times reported that President Mahmoud Abbas had also threatened to dismantle the PA if the peace talks led by US Secretary of State John Kerry collapsed.

The interview also touched on Palestinian perceptions of the PA, after a survey in early December revealed that 81% of Palestinians believe that corruption exists in the PA. Rajoub rejected these harsh charges. “There is an exaggeration. I don’t think this is the reality. Maybe there is here and there, but this happens everywhere.” On Dec. 23, Jordan extradited a PA official accused of embezzling millions of dollars.

In addition to heading the Palestinian Football Federation, Rajoub was elected to Fatah’s Central Committee in 2009 and is rumored to be a candidate to succeed Abbas. During the second intifada, Rajoub headed the Preventive Security Service in the West Bank.

Lashing out at former Fatah strongman Mahmoud Dahlan for his criticism of the Palestinian UN Security Council move, Rajoub exclaimed, “Who is Dahlan? He is one Palestinian. This is rubbish and shame to say that.” On Jan. 3, Dahlan told Sky News Arabia that the PA’s push to the Security Council was a “disaster” and “hasty and reckless.”

The interview also touched on the controversial firing last month of the Palestinian Legislative Council’s Secretary-General Ibrahim Khreisha. Senior Fatah officials, including Azzam al-Ahmad, slammed Abbas for the move and Daoud Kuttab noted in Al-Monitor that concerns had grown regarding Abbas’ “autocratic tendencies.” Rajoub said that this move did not violate the separation of powers and that “Khreisha was not elected. He is an employee of the PA like me.”

Al-Monitor:  Do you support disbanding the PA?

Rajoub:  The PA will never be disbanded. The PA was and will remain a national achievement and national necessity. Dissolving it is not on the agenda of the political leadership.

Al-Monitor:  Since Abbas was elected 10 years ago and never re-elected, how does he have the right today to make fateful decisions on behalf of the Palestinian people, such as maintaining security ties with Israel or drafting a Security Council resolution?

Rajoub:  The high level overriding leadership is the PLO. The Palestinian local authority had the mandate from the PLO Executive Committee and the national council. The election was delayed, then the Central Council of the PLO convened and expanded the mandate of the president.

Rajoub:  In 1996, we had elections and in 1999 the national council extended the period for Yasser Arafat until he passed away. The ceiling of the PA is the PLO. As soon as we have reconciliation, the first step is to have elections. There is a serious problem, but he who is representing the Palestinian people is not the PA, it is the PLO.

Al-Monitor:  How can Abbas claim legitimacy if the entire Palestinian population doesn't approve him, rather a much smaller body?

Rajoub:  This is not true. Here we have two organizations. The first one is the PLO, which is the term of reference. Second we have the PA, which is a local authority in charge of management of the situation. The PLO’s composition is totally different from the PA. The PLO’s Central Council met six months ago. That is about a 120 people. The legitimacy of the PA is coming from the PLO. All of the Palestinians, including the people of Hamas, recognize the PLO as the sole representative.

Al-Monitor:  Why does Fatah maintain security ties with Israel now?

Rajoub:  This is not true and it is not fair. Since the collapse of negotiations, the whole system of bilateral cooperation is zero, including the issue of security. But officially it is a matter of time before we declare this. When the time is right we will take this decision. It is a matter of days or weeks.

Rajoub:  Mr. Dahlan has the right to meet with whomever he wants to meet. He was fired from Fatah. I don’t think he is representing the Palestinian people. Who is Dahlan? He is one Palestinian. This is rubbish and shame to say that. He wants to criticize just for the sake of criticism.

Al-Monitor:  According to a recent December poll, 81% of Palestinians believe that corruption exists within the PA. Are you concerned?

Rajoub:  If this is true, everybody should be the worried, but I think there is an exaggeration. I don’t think this is the reality. Maybe there is here and there, but this happens everywhere.

Al-Monitor:  What are your thoughts on the dismissal of Palestinian Legislative Council Secretary Gen. Ibrahim Khreisha from his post? Isn't this an abuse of powers by Abbas?

Rajoub:  You are talking about an official who was dismissed: whether it was true or not true. Now he went to the court and the court will decide whether he is innocent and go back to his position. Ibrahim Khreisha was not elected. He is an employee like me in the PA. Now some people around him claim that the government has no right to remove him. Neither him nor me can say this is right or not right.

Al-Monitor:  Do you consider yourself a future presidential candidate?

Rajoub:  This is not an issue. For me, the position is not an obsession. I am in charge of the youth and sports sector. I need at least 10 years to achieve having an effective and strong organization. This is not on my agenda.