Tony Blair’s chance to play a political role in the Palestinian issue is slipping away, as the PA refuses to accept him, President Abbas and the PLO refuse to deal with him on a personal level and Hamas has turned down all his initiatives. 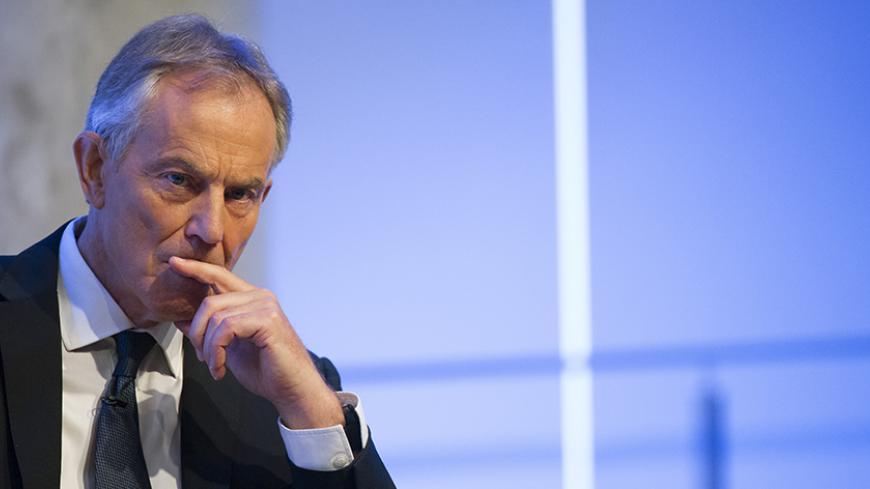 Former British Prime Minister Tony Blair listens to a question during an appearance at the 9/11 Memorial Museum in New York, Oct. 6, 2015. - REUTERS/Brendan McDermid

RAMALLAH, West Bank — Tony Blair has kicked off his personal campaign of seeking peace between Israel and the Palestinians, but Palestinian Authority members and others have bluntly expressed their distrust of the former British prime minister and former envoy of the Middle East Quartet.

Palestinian leaders are clear about their resentment of Blair. During a Nov. 9 meeting with a group of Egyptian journalists in Cairo, Palestinian President Mahmoud Abbas attacked Blair and called him a “spy” for Israel because of his attempts to conclude an appeasement agreement between Hamas and Israel, while ignoring the PA.

“Abbas has been refusing to meet with Blair for two years because of his pro-Israeli negative role,” political sources in the PA told Al-Monitor on condition of anonymity.

The PA was suspicious of Blair when he was the envoy of the Middle East Quartet in 2011 and accused him of using the Quartet to “achieve Israel’s demands only, satisfy it and reflect its stances.”

The PA also accused Blair of adopting Israel’s 2011 demands. They accused him of ignoring Palestinians’ rights, lobbying to forbid Palestine from joining the UN, ignoring the need for the involvement of the PA in the negotiations and asking Palestinians to recognize the Judaism of Israel. In this context, the youth took to the streets of Ramallah on Oct. 26, 2011, and marched to demand that the PA dismiss Blair.

But Blair notes how much things have changed in the past few years. Arab nations and Israelis now share common enemies: terrorism and extremism.

“There is an objective shared interest between Arabs and Israelis. The Palestinian issue is the key which opens this door,” he said on his official website.

Blair's plan, which he announced Nov. 13 in Jerusalem, uses the framework of the Arab peace initiative launched in 2002. The initiative stipulates the establishment of a Palestinian state according to the 1967 borders and Israel’s withdrawal from the occupied Arab territories in exchange for a conclusive normalization of relations between the Arab states and Israel.

Yet, the Palestinians still do not welcome Blair’s plan.

“He no longer occupies any position related to negotiations or the peace process,” Saeb Erekat, secretary-general of the PLO’s Executive Committee and head of its Negotiations Affairs Department, told Al-Monitor. “His role in the peace negotiations and process ended. Therefore, we do not deal with him anymore.”

However, on his website Blair says his plan can create “trust and credibility” between Israelis and Palestinians if three conditions are met:

“First, the involvement of the Arab powers in such a process is essential and long overdue. The Arab Peace Initiative in 2002 was a landmark event. Of course it needs revision … but its framework offers a way to negotiate where both Israel and the Palestinians have the confidence that the negotiations are supported by the region as a whole.”

Second, he says, “Life on the ground for Palestinians has to improve radically, and immediately. … Gaza lacks even the basic infrastructure for electricity, sanitation, clean drinking water and housing.” He also calls for more than 100,000 jobs to be created every year over the next decade.

“There is a virtual consensus on what needs to happen to improve daily life — in Gaza and the West Bank. These are not things with security implications. In fact, improving Palestinians’ living conditions would serve Israel’s security. We need to agree [on] them and do them.

“Without significant and real change in the way Palestinians live, there is no hope for a political process."

Finally, he said, “There will be no lasting peace without Palestinian reconciliation and unity on a basis that supports the two-state solution, where Israel is secure and the Palestinian state is viable.”

Fatah spokesman Osama al-Qawasmi, however, said Blair’s words are empty. “Blair does not represent any official side [anymore]. He only expresses his own thoughts. He is now a messenger for Israel, just like he sponsored its interests in the past,” he told Al-Monitor.

“Blair is a suspicious figure, and Palestinians do not welcome him at all.”

The PA’s anger at Blair flared up in the past few months when the latter reportedly met with Hamas leader Khaled Meshaal several times during July and August in Doha seeking a long-term truce between Hamas and Israel — without including the PA.

The PA thinks Blair is trying to marginalize it by communicating directly with Hamas and believes that this approach will only widen the Palestinian rift and encourage the establishment of a state in the Gaza Strip only.

But Blair would not confirm he had met with Hamas, saying only, “What I have found since leaving the Quartet role is it has been easier to have conversations of complete frankness with people. And since I have the relationships, people may be prepared to be more forthcoming.”

On Sept. 4, Hamas refused a proposal Blair reportedly had made to ratify a long-term truce with Israel in exchange for lifting the Gaza blockade and building a port under Israel’s control.

Hamas leader Yahya Moussa told Al-Monitor, “Hamas refused Blair’s efforts to conclude a truce with Israel because such an agreement does not fulfill Palestinians’ rights. He is now seeking to propose new initiatives that aim at halting the intifada and reshuffling the Palestinian cards.”

Ahmad Youssef, a former Hamas leader and adviser, told Al-Monitor, “Blair is nothing to us. Nobody is counting on him in any issue or step. Hamas does not take him seriously because he is not a decent mediator who has the Palestinians’ credibility. Blair’s efforts have gone down the drain, and Hamas has shut its doors in his face."