The Palestinian Authority fears the proposed long-term truce between Hamas and Israel under the pretext of the humanitarian crisis would lead to separating the Gaza Strip from the West Bank, and then to passing "the deal of the century." 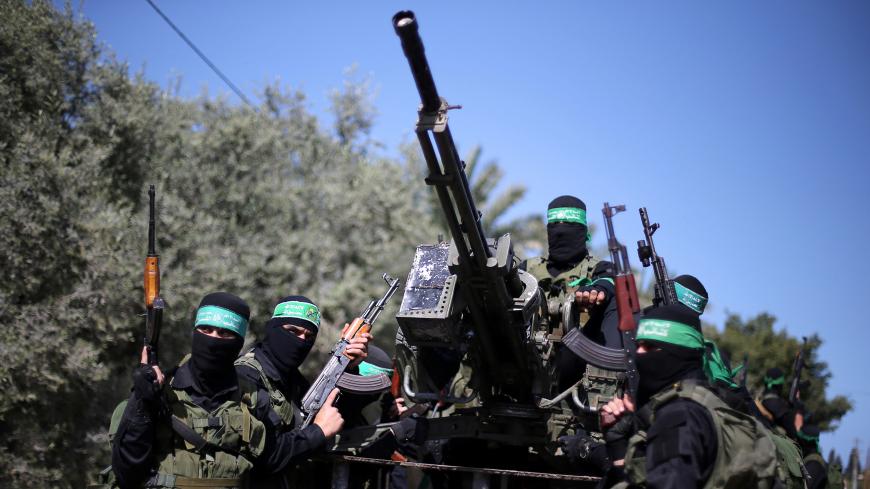 RAMALLAH, West Bank — The 24-hour military confrontation May 29 between the Israeli army and the Palestinian factions led by Hamas in the Gaza Strip proved the parties' desire to contain the situation and keep it from escalating into an open confrontation.

The desire of the parties to refrain from military escalation indicate that the word that circulated in Arab and Hebrew media circles in May about Egyptian and Qatari mediation attempts to conclude a long-term truce between Hamas and Israel to ease the siege on Gaza — which Al-Monitor reported on — is likely true.

Israeli newspaper Maariv said in its editorial June 1, “The recent escalation in Gaza has not hindered the advanced contacts and negotiations on the comprehensive settlement on the southern front, but on the contrary has further accelerated them.” The newspaper stressed that “contacts continue at a high pace, with an Egyptian mediation and a limited Qatari participation.”

Meanwhile, Al-Monitor’s Ben Caspit reported in late May that “Israel has given Egyptian and Qatari mediators the green light to deliver the goods” when it comes to a Hamas-Israel agreement.

Days before the military confrontation, on May 23, Israeli analyst Alon Ben-David revealed in statements to Israeli Channel 10 extensive efforts to achieve a long-term truce between Hamas and Israel in tandem with diplomatic efforts deployed to reach a long-term cease-fire in Gaza, pointing out that Israel is considering two truce proposals — one Egyptian and the other Qatari.

Washington was not unaware of these contacts aimed at reaching a truce. On May 19, Al-Hayat quoted Western diplomatic sources as saying that Washington is discussing with an Arab country the issue of Gaza and its humanitarian, security and political situation. The sources said the United States also discussed with this Arab country the possibility of persuading Hamas to take political and security steps. These steps include refraining from defying US efforts for a comprehensive political solution in the region ("the deal of the century") and creating a special department to manage the Gaza Strip. This department shall be formed, with Hamas’ approval, of independent personalities receiving financial support from the United States and Western countries to solve the humanitarian problems in Gaza.

The US contacts raised the concern of the Palestinian Authority (PA) and President Mahmoud Abbas, who described them as an attempt to force him to return to negotiations with Israel. Palestinian presidential spokesman Nabil Abu Rudeina said in a press statement May 23, “Any attempts to circumvent the clear and firm Palestinian position, whether through Palestinian parties or suspicious models that failed to act as local leaders, or through regional parties, will only lead to further deterioration and tension in the region and the world.”

A source in the PA told Al-Monitor on condition of anonymity that “the PA is very concerned about the proposals that encourage the secession of Gaza from the West Bank under humanitarian pretexts.” He argued that the PA’s fear is due to the stance of some Arab countries, which he did not specify, that support those proposals in order to pave the way for the deal of the century and obtain favors with the United States.

The source pointed out that the PA is addressing these attempts by coordinating with the Arab countries. It noted that the tripartite meeting held in Cairo May 31 by the foreign ministers of Palestine, Jordan, Egypt and their heads of intelligence services is part of these efforts.

Azzam al-Ahmad, a member of the Fatah Central Committee and a member of the PLO Executive Committee, told Al-Monitor that the Palestinian leadership is aware of extensive diplomatic movements that are being carried out under various pretexts by the United States and some Arab and regional countries.

He said, “These movements aim to shuffle the cards in the Palestinian arena by talking about a possible political solution based on the humanitarian situation in Gaza and that may put an end to reconciliation and national unity. This explains why these countries were annoyed by the PA for having rejected the Donald Trump declaration on Jerusalem and the deal of the century. Arab states continuously confirm that they support our stance toward the deal of the century.”

Although the declared positions of some of these Arab countries fall in favor of Palestine, leaks in the media show otherwise with positions backing Washington's expected deal.

In a closed meeting with US Jewish leaders in New York March 27, Saudi Crown Prince Mohammed bin Salman was quoted by Israeli Channel 10 as saying, “For the past 40 years the Palestinian leadership has missed opportunities again and again, and rejected all the offers it was given.” The crown prince reportedly added, “The time has come for Palestinians to take what they are offered and return to the peace negotiations or shut up and stop complaining.”

In regard to the fear of the PA from Hamas’ position on these proposals, Ahmad said, “We do not fear Hamas’ approval of such proposals. The PLO is the leader of the Palestinian people that is recognized by Israel, the United States and the world.”

Osama al-Qawasmi, a member of Fatah's Revolutionary Council and the movement's official spokesman, told Al-Monitor that Hamas' actions on the ground or statements are messages to Israel and the United States that it wants to separate Gaza from the West Bank.

“Contacts with Hamas are being made under the pretext of improving the humanitarian situation and the partial relaxation of the blockade in exchange for a long-term truce, and this is a purely Israeli demand. Israel seeks to turn Gaza into an entity separate from the West Bank,” he said. “The rocket fire and escalation days ago were mutual malicious messages between Israel and Hamas that highlight the need for the secession of the Gaza Strip.”

Qawasmi stressed the PA’s capacity to thwart any such schemes. “We are the leadership of the Palestinian people. We insist on preserving the unity of Palestinian political representation. The PLO and the PA enjoy international legitimacy. We are capable of sabotaging any suspicious plan that may contribute to the secession of Gaza,” he said.

Hani al-Masri, the head of the Palestinian Center for Policy Research and Strategic Studies - Masarat, told Al-Monitor that the chances of success of the truce between Hamas and Israel have increased at the present time more than before. He noted, “The stumbling Palestinian reconciliation and unity in addition to Israel’s inability to deal with Gaza — especially after the recent rounds of infighting — increased the chances of a truce between the parties,” he said.

Commenting on the PA position, Masri argued that the truce proposals are keeping the PA up at night. “The PA sees them as tantamount to an implementation of the deal of the century, in complicity with some Arab countries,” he said. “If the PA wants to block truce proposals or the deal of the century, it must show flexibility and agree with Hamas on common points. The PA must recognize that the best way to thwart such plans is national unity and reconciliation with Hamas.”

The continuation of the siege of the Gaza Strip for 12 years, ever since Hamas’ victory in the 2006 parliamentary elections, has led to a total collapse in all aspects of life in the enclave. The failure of reconciliation with Fatah and the PA’s imposition of sanctions on the Gaza Strip, including the recent freezing of salaries of PA employees in Gaza, have cornered Hamas.