Turkey’s president has likened dollar and euro holders to terrorists armed with guns and bombs, deepening further the controversy on how the country will overcome its foreign-exchange crunch. 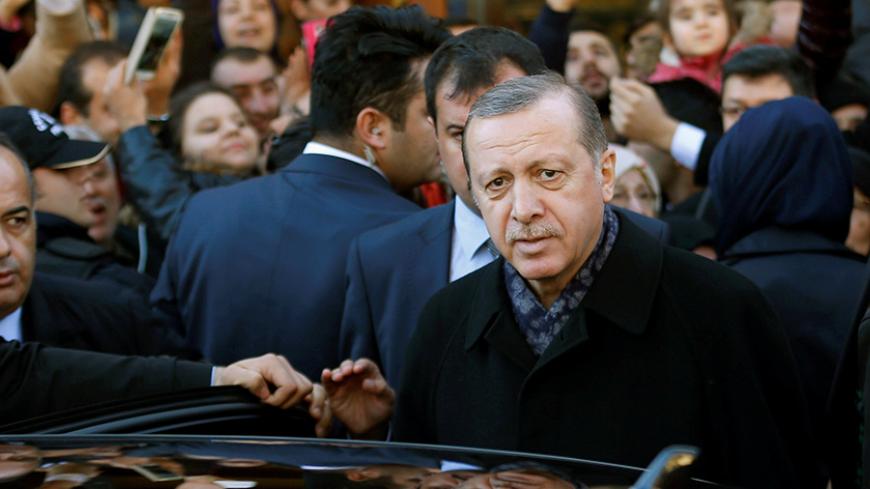 ANKARA, Turkey — The unstoppable rise of the dollar and the euro against the Turkish currency had the country’s president fuming last week. Speaking Jan. 12 in his palace, Recep Tayyip Erdogan claimed that economic warfare was behind the Turkish lira’s dramatic depreciation. “Everybody now sees and knows that the attacks Turkey is suffering have an economic dimension as well,” he said. “In terms of aims, there is no difference between a terrorist who has a gun and a bomb in his hands and those who have dollars, euros and interest rates. The aim is to bring Turkey to its knees, cow it into submission and take it away from its goals. They are using the foreign exchange as a weapon.”

Erdogan then urged Turkish businesspeople to revive investments, but his appeal sounded rather menacing. “I’d like to repeat my call on our business community: Today is the day to make investments, produce and increase employment. If you don’t take the risk today, you may not have anything left to risk tomorrow,” he said. Two days later he reiterated the same message during a ceremony at the Istanbul stock exchange.

Investments in Turkey have ground to a halt and unemployment has reached 11.3%, well above jobless rates in previous economic crises, with the economy contracting 1.8% in the third quarter of 2016. Erdogan’s outburst came as the Turkish lira hit record lows, having lost almost a quarter of its value since the failed coup attempt in July.

Since early December, the president has been urging Turks to convert their dollars to Turkish liras, but the campaign has had little effect. The amount of foreign exchange deposits in banks shows that Turks continue to opt for dollars or euros as the most reliable investment tool to preserve the value of their savings. According to Central Bank data, foreign exchange deposits were worth $174.9 billion on Dec. 30, up from $174.4 billion on Dec. 23 despite Erdogan’s calls.

Erdogan may draw links between foreign currency and terrorism, but the Central Bank’s Financial Stability Report of November speaks of other factors in the context of foreign exchange risks. The report says Turkey is the second country, after China, where the debt of private companies has increased the most, adding that the growing numbers of public-private partnership (PPP) projects — or “megaprojects” as they are widely known — have played a role in the increase.

The PPP investments include the $35 billion third bridge over the Bosporus, the third international airport for Istanbul, the Eurasia Tunnel, the Osmangazi bridge and motorway, the $27 billion city hospitals project, energy facilities and power plants. The Turkish state has provided “purchase guarantees” for those projects in prices indexed in dollars or euros for periods of between 10 and 49 years. The guarantees put a heavy risk burden on the Turkish economy in terms of foreign-currency debts not only for today, but also for the coming years.

According to the Financial Stability Report, about 27,000 companies have foreign exchange (FX) liabilities. The FX debt of 21,000 companies accounts for 5% of the total, while the remaining 95% belongs to 6,000 companies, including 1,114 that hold 75% of the debt.

And those are mostly companies that have been awarded PPP projects with state guarantees and are owned by businesspeople close to the ruling Justice and Development Party (AKP).

“When 30 firms that use FX credits in the highest amounts constituting 20% of the total FX credits are examined, it is observed that their investments are mostly concentrated in PPP projects such as energy, airport, highway, city hospital and telecommunication, and export intensive sectors such as automotive and metal industries,” the report says.

In a sense, the report rebuts Erdogan and government officials, who blame some malicious actors — foreign powers, credit rating agencies, a “supreme mind,” terrorists with dollars and euros, or internal and foreign enemies seeking to topple the AKP — for the Turkish lira’s depreciation and other economic woes. The report rather suggests that the government’s economic and investment policies, including the multibillion, FX-indexed PPP projects, have significantly contributed to the problem.

To curb the liquidity available to buy foreign exchange and prop up the national currency, the Central Bank in January twice reduced the banks’ borrowing limits at the interbank money market — first to 22 billion liras ($5.85 billion) and then to 11 billion liras. Through these moves, the Central Bank is indirectly pushing banks to borrow with higher interest rates in a bid to prop up the value of the lira.

Yet such measures can hardly produce lasting, long-term effects without improvement in Turkey’s political outlook. As long as political tensions persist and the credibility of the state institutions, the judiciary and the law continues to erode, the risks are unlikely to go away.

In a parliamentary speech after Erdogan’s outburst against “terrorists with dollars and euros,” Faik Oztrak — a former treasury undersecretary and now a lawmaker for the main opposition People’s Republican Party — said the government should first explain the staggering sums of unknown origin that entered Turkey during the 14-year AKP rule. As of November, the figure stood at $39 billion, he said.

Stressing that Turkey was in dire need of foreign exchange, Oztrak said: “The external debt we have to repay in the coming year amounts to $164 billion. Add to this the estimated $32 billion current account deficit for 2017 and the foreign-exchange funds we need to find from abroad reaches [nearly] $200 billion. … And what is in the coffers? The Central Bank’s net reserves, including gold, stand at $34.7 billion as of Jan. 11. This means we can hold on for only two months unless we find money from abroad.”

Turkey’s business community, including exporters, has remained mum in the face of Erdogan's equating dollars and euros to guns and bombs. The president’s call on entrepreneurs to brave the risks and invest is particularly scaring off foreign investors who are supposed to bring in foreign exchange.

Such a move is likely to further push up exchange rates, dealing a fresh blow on investor confidence in the Turkish economy and capital inflows into the country. Erdogan and the government had branded S&P and Moody’s as “putschists” after the rating cuts. If Fitch follows in their footsteps, it may well end up with the “terrorist” label.