Iraqi Kurdistan is bracing itself for further political instability, economic hardship and armed conflict after the Islamic State has been defeated. 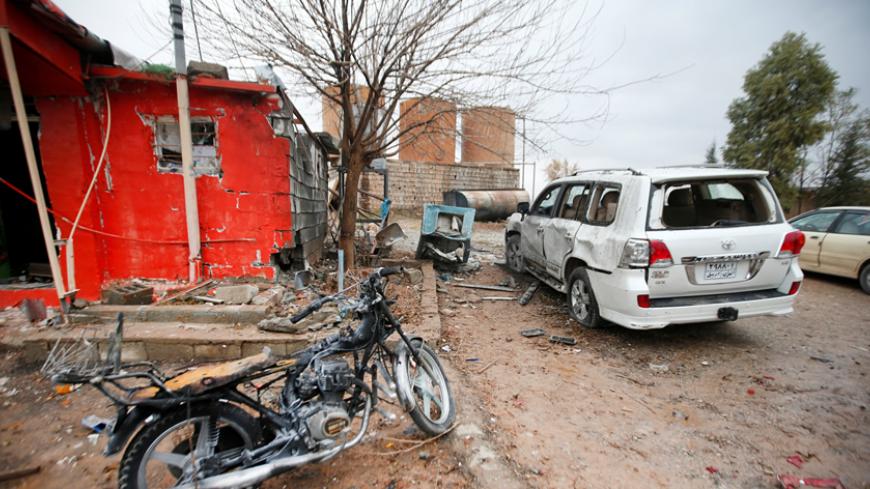 Destroyed vehicles are seen at the site of bomb attack on the offices of the Democratic Party of Iranian Kurdistan in Koy Sanjak, east of Erbil, Iraq, Dec. 21, 2016. - REUTERS/Azad Lashkari

The campaign against the Islamic State (IS) in Mosul has diverted attention from simmering problems inside the Kurdistan Region of Iraq that will affect post-conflict stabilization. Within the last several months alone, there has been another assassination of a Kurdish journalist, an "honor" killing of a university student, death threats against a female Kurdish parliamentarian, bombing of an Iranian Kurdish party office that killed seven people and a string of foiled terrorist attacks in Sulaimaniyah province. These incidents have occurred alongside ongoing demonstrations by civil servants for unpaid salaries, a nonfunctioning Kurdish parliament, swelling numbers of refugees and internally displaced persons, an expanded Kurdistan Workers Party (PKK) and Turkish airstrikes on PKK bases in northern Iraq. They have not only reversed most gains the Kurdistan Regional Government (KRG) has realized since 2011, but also leave the Kurdistan Region increasingly vulnerable to financial collapse and internal conflict.

Instead of "inevitable Kurdish statehood" after the defeat of IS, a more realistic scenario is weakened autonomy, political entropy and armed conflicts. The KRG launched "independent" exports in 2014, but the Kurdish economy is now in tatters. KRG debt exceeds $22 billion. The availability of electricity has decreased to 2005 levels, or about four hours a day in many areas without private generators. Tens of thousands of youths continue to migrate from the region. The once-touted Kurdish energy sector is being undermined legally and politically. Although the KRG exports about 600,000 barrels of oil per day to Ceyhan, these exports remain contentious, are dependent on Turkey and are largely sourced from Kirkuk — still a disputed territory — and not the Kurdistan Region. International oil companies have thus far abandoned 19 oil fields in the Kurdistan Region, including ExxonMobil’s withdrawal from three of its six fields.

Emails between the KRG Ministry of Natural Resources and Turkish officials released by WikiLeaks reveal the depth of the KRG’s financial crisis and the political fallout. In the eyes of some Kurds, the ministry's attempt to secure an additional $5 billion in loans from Ankara and offer Turkey a larger stake in Kurdish-controlled oil fields may help protect the economic interests of the Kurdistan Region. Others, however, including parliamentarians in Erbil, see things differently and oppose the ministry's proposal as the “selling of the Kurdish land to Turkey.” Iraqi officials in Baghdad have also reacted critically, arguing that the KRG does not have the legal right to sell oil fields to Turkey.

Expanded PKK influence in northern Iraq is feeding off these crises and reinforcing intra-Kurdish power struggles. In addition to its base in the Qandil Mountains, PKK groups are now embedded in the Sinjar Mountains to protect the Yazidis against future incursions by IS and to control this strategic territory. While the Patriotic Union of Kurdistan (PUK) and Gorran support or tolerate the PKK, Kurdistan Democratic Party (KDP) officials have threatened to potentially use force to eject the PKK from Sinjar. Ankara has also warned that it will intervene in Sinjar in the spring if the peshmerga fail to drive out the PKK. Although acting PKK leader Murat Karayilan has recently said that PKK forces are prepared to withdraw from the Yazidi district of Sinjar, it is unlikely that PKK-affiliated groups will depart entirely. Divisions between those that support the KDP and those against it in northern Iraq are also palpable. Concerns have emerged about the possibility of another birakuji, Kurdish civil war.

Indeed, the idea of armed conflict between the Kurds or internal instability may be difficult to imagine. Much has improved since their four-year Kurdish civil war (1994-98). The Kurdistan Region has developed economically, matured politically, gained international recognition as part of a federal Iraqi state and has become a key local partner in the battle against IS. Although the Kurdish parties are bickering, the risks of sustained violence are too high for leading KRG officials, who are deeply vested financially in the region. Iraqi Kurdish parties are also too fractured and reliant on President Massoud Barzani to effectively challenge the KDP, even if they oppose it politically.

Still, part of the current crises is beyond the KRG’s control and is not so different from what led to the Kurdish civil war. At that time, Iraqi Kurdistan was politically and economically unstable, despite its international safe haven status. Baghdad’s withdrawal from the Kurdish north after the 1990 Gulf War and international sanctions against Iraq had left the newly created KRG unable to pay civil servant salaries, provide services, resettle hundreds of thousands of Kurdish refugees and reconstruct the villages destroyed by President Saddam Hussein’s Anfal campaign, which involved chemical attacks. Although individual traders tied to Kurdish political parties found creative ways to break sanctions and profit, the majority of Kurds were poor and reliant on international aid.

Power struggles were also salient between the KDP and PUK over leadership and access to revenues and resources. These tensions drew in Turkey, Iran and rival Kurdish parties, including the PKK, much like what has happened today. Back then, for instance, to check the PKK insurgency raging in southeastern Turkey and to secure smuggling revenue at the Habur border, the KDP negotiated commercial and security arrangements with Turkey. Ankara, in turn, launched a series of cross-border military campaigns from 1992 to 1997 — Operation Steel-1 and Operation Hammer — to pursue the PKK across the border. At one point, Turkish interventions involved 35,000 troops penetrating 37 miles inside the Kurdistan Region. The PUK gained support from Iran and backed the PKK. Islamic groups also took advantage of the instability to form and radicalize, including the precursors to Ansar al-Islam.

These patterns are repeating themselves in the Kurdistan Region. Even if the KRG and Kurdish party officials have much to lose from internal conflict, other groups may not and could benefit from the weak Iraqi state, angry populations and managed instability. In addition, as the KRG becomes increasingly dependent on Ankara, the Kurdish problem in Turkey remains unresolved, the Kurds in Syria demand autonomy and the PKK expands its influence, the KRG will inherit the transborder PKK problem. The PKK in turn will attempt to benefit from the political void growing in the Iraqi Kurdish street, where many see it as an authentic Kurdish nationalist party. The PKK and other radicalized groups are also useful to regional states, including Iran, that seek to counter Barzani-KDP power and Turkey.

Left unchecked, these tensions will continue to undermine the economic growth and internal stability of the Kurdistan Region — even after Mosul's liberation — and the KRG’s ability to act as an effective local partner to defeat IS. More serious attention should be paid to strengthening Iraqi state institutions, including the KRG and provincial administrations, economic diversification, revenue-sharing between Baghdad and Erbil, border security and relations between Ankara, Baghdad and the KRG. The PKK issue inside northern Iraq also needs to be addressed by including ways to reinstate a cease-fire with Ankara and resolve the Kurdish issues in Turkey and Syria.