Political and economic tensions are chipping away at the autonomy, stability and unity of Iraqi Kurdistan as diverse local populations are calling for political reforms and an end to corruption. 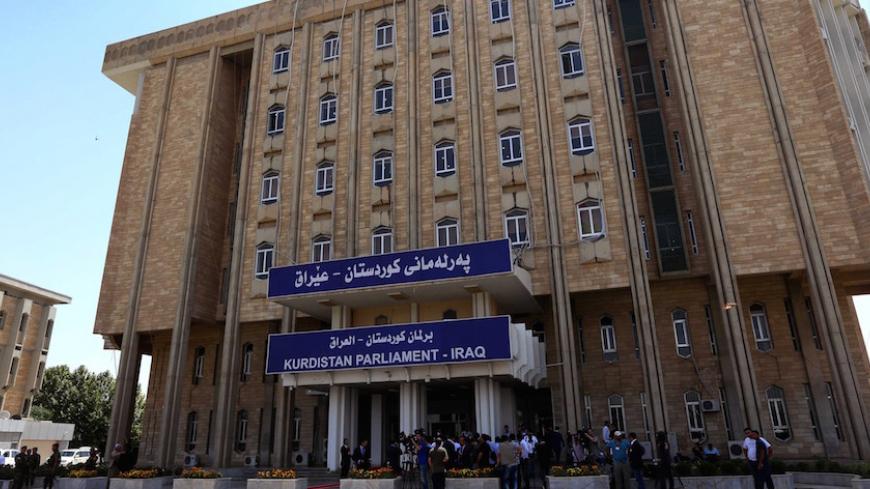 On a recent episode of the popular Iraqi Kurdish talk show "With Ranj" produced in Sulaimaniyah, the four participants — all members of diverse political parties — debated the Kurdistan Region’s political and financial crises. The discussion was most notable for its tone and substance. Instead of talking about the need for an independent Kurdistan, a topic that has preoccupied mainstream media and analysts inside the Beltway, it focused on just the opposite: political and economic trends that are chipping away at the region’s autonomy and stability. These concerns are resonating throughout the Kurdistan Region, where local populations are criticizing the Kurdistan Regional Government’s opaque oil exports, endemic corruption and failure to pay civil servant salaries, and questioning the legitimacy of Massoud Barzani’s presidency. They are further deepening political and geographic divides that if left unchecked could split the region administratively and/or create civil unrest.

Iraqi Kurdistan’s current tensions reflect the legacies of the Kurdish civil war (1994-98), which divided the region into "yellow" and "green" zones representing the territorial influence of the Democratic Party of Kurdistan (KDP) and the Patriotic Union of Kurdistan (PUK), respectively. After the war ended, the two parties ran their own administrations in Erbil and Sulaimaniyah for eight years until they "re-unified" in 2006 in the effort to enhance Kurdish leverage in a federal Iraqi state. The merge created a single KRG in Erbil and a Kurdish block in Baghdad, but it never resolved internal disputes over authority, revenues and resources.

As the balance of power shifted in the region, Kurdish power struggles have resurfaced. The two main Kurdish parties are now making distinct claims on resources as a means of affirming provincial leverage. Competitions for access to Kirkuk’s oil have also emerged, not only between the KDP and PUK, but also with other claimants such as Iraqi populations and Baghdad and Kirkuk officials. Even then, the KRG’s current crisis extends beyond traditional party rivalries over revenues and resources. It represents a popular movement driven by a combination of opposition groups, independents and parties in the Kurdish government that are all demanding greater decentralization, financial transparency, democratic institutions and the rule of law. The movement has gained traction in the presidency crisis, creating a clear division between those who regard Barzani’s authority as legitimate and those who do not, particularly since his term expired on Aug. 19.

The region’s ongoing financial crisis is reinforcing these political divides. Whereas most local populations initially blamed Baghdad for cutting the KRG budget last year, many now fault leading KRG officials. One Kurdish resident in Erbil argued that by “placing all of the KRG’s eggs in the Turkish basket, the KRG has not only undermined necessary relations with Baghdad, but has left the region dependent on Turkey and more financially vulnerable than ever before.” Fueling these claims is the opaque Kurdish oil sector. Officials on the oil and gas committee in the Iraqi Kurdistan parliament affirm that “no one knows where the KRG’s oil revenues are actually going.” Although the KRG has about 16 bank accounts into which revenues from its oil sales are supposedly deposited, the KRG minister of finance has access to one Turkish Halkbank account — which has only $14 million in deposits — while the minister of natural resources and Prime Minister Nechirvan Barzani control all other bank accounts.

Indeed, when it comes to existential threats to the Kurdistan Region, the Kurds remain generally united. They are committed to Kurdish identity, territory and resources. They proudly identify with their peshmerga forces, who are courageously defending Kurdish borders against the Islamic State. Most Kurds also are aware that Baghdad currently has little to offer and that the Kurdistan Region has to find an alternative means to financially sustain itself, at least for the time being.

Still, political divisions are being encouraged in the hyper-fragmented Iraqi state and fight against IS as local groups seek to gain power, resources and recognition. The result has been an inadvertent enhancing of Barzani’s power through coalition military support, stronger reactions by those seeking political reform and deepening distrust between groups. Since the presidency crisis commenced, the KDP has added three checkpoints along the road from Sulaimaniyah to Erbil. It also prevented some officials from the Gorran movement, a former opposition group now in the parliament, from entering Erbil a few weeks ago. These trends have strengthened the role of political hard-liners who are unwilling to compromise. Despite numerous meetings between the four Kurdish political parties and the KRG — otherwise known as the P4+1 — to resolve the presidency crisis, no full solution is in sight. Many argue that the issue could continue until the next election in 2017, which, according to one Kurdish official, will be “neck-breaking.”

At the moment, a formal split between regions or a mass mobilization is unlikely, given the war against IS, deep party patronage networks and no clear alternative offered by opposition groups. Yet, as the financial crisis deepens, corruption continues, political legitimacy is ignored and calls for decentralization go unheeded, the KRG may have an administrative breakup, even in de-facto form. At worst, these issues will continue to fester through open and silent resistance that may further stifle the stability and economic development of the Kurdistan Region.