Will US, Russia find common ground in Syria?

A common enemy, the Islamic State, should be the first step in an expanded international coalition; does Iraqi Kurdistan face the prospect of "administrative breakup"? 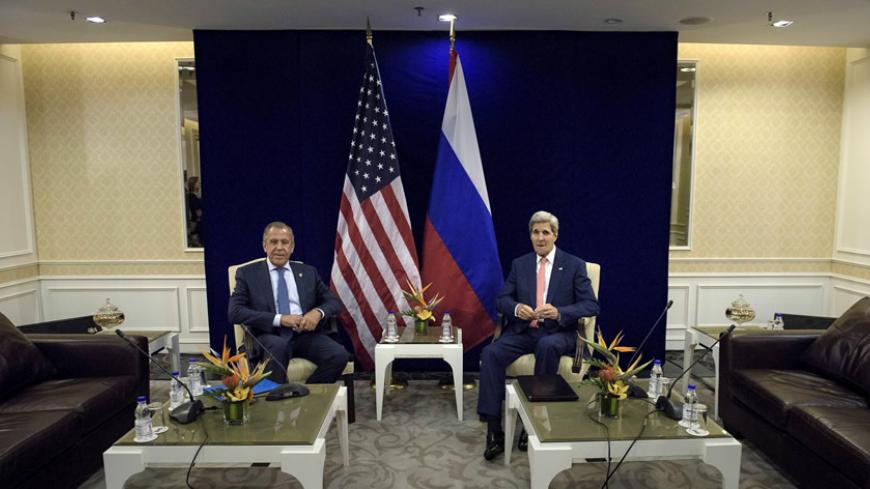 Russia's Foreign Minister Sergey Lavrov (L) and US Secretary of State John Kerry sit next to each other before a bilateral meeting in Kuala Lumpur, Malaysia, Aug. 5, 2015. - REUTERS/Brendan Smialowski

US can defer on Assad until IS is defeated

Russian Federation President Vladimir Putin’s expanded military assistance to the government of Syria could provide an opening to expand the US-led coalition to defeat the Islamic State (IS).

Vitaly Naumkin writes that Putin’s bid can be understood in the context of Russia’s consistent support for the government of Syria, and of a piece with a new multilateral effort to combat terrorism that has been endorsed by Iran, and could at some point include China.

Putin’s moves have put the United States on defense over its Syria policy. On Sept. 16, Gen. Lloyd Austin, commander of US Central Command, testified to the Senate Armed Services Committee that only “four or five” US-trained Syrians were in the fight against IS, far short of the projected 5,400 fighters, as part of program costing $500 million. On Sept. 25, a CENTCOM spokesman said that US-trained “New Syrian Forces” provided trucks and ammunition to al-Qaeda-affiliated Jabhat al-Nusra in return for safe passage.

As the US-backed train-and-equip program has proven to be both failure and fiasco, and the US reports of the actions of coalition bombings remind some of the “body counts” during the Vietnam War, Washington has also been stymied until now by its insistence, since August 2011, that Syrian President Bashar al-Assad should “step aside.”

While Assad may have lost ground, he is not on the way out, backed to the teeth by Russia, Iran and Hezbollah. The Obama administration’s aspirational Assad strategy began in the heady days of what was once called the Arab Spring and has probably complicated US diplomacy to negotiate and lead a political transition in Syria, opening up the space for Russia and Iran to seize the initiative, which they have done. As Julian Pecquet reported last week, members of both US political parties are starting to question US policy toward Assad.

Russia’s power play this month forced US Secretary of State John Kerry to seemingly backtrack when he said on Sept. 20 that the Syrian president’s role in a political transition would be “defined through negotiation. Nobody knows what the answer to that is. I can’t tell you standing here today. But most people have accepted that to get somewhere it’s not going to happen on day one or week one; there’s got to be some period of time. I don’t know what it is, but it has to be negotiated.”

Turkish President Recep Tayyip Erdogan seemed to follow suit Sept. 24, a day after meeting with Putin in Moscow, when he said, “We can have a process without Assad, or something like going with Assad during a transition period,” as Semih Idiz reports this week. Erdogan also referred to a “triple initiative” among the United States, Turkey and Russia and Syria, which could also include Saudi Arabia and Iran.

Iran’s role in Syria is just as vital to negotiating a political transition to end the war. Both Ali Hashem and Hassan Ahmadian write that the Joint Comprehensive Plan of Action (JCPOA) agreed to between world powers and Iran has its critics in Tehran, and that cooperation on regional issues will likely depend on its implementation. Iranian President Hassan Rouhani said on CBS' 60 Minutes on Sept. 20 that with regard to the United States and Iran, “common goals, or common interests may exist. But what is important is that in the nuclear agreement we see how the two sides behave in action. Enacting this deal in a good way will create a new environment.”

On Syria, Rouhani said, “How can we fight the terrorists without the government staying? Of course, after we have fought terrorism and a secure environment is created, then it is time to talk about the constitution, or the future regime to talk and discuss opposition groups and supporters sit at the table, but during a situation of bloodshed and during an occupation of the country, what options exist?”

Barbara Slavin reports that Rouhani told journalists in New York on Sept. 25 that Iran has “'common objectives’ with Russia in Syria in fighting terrorist groups. However, he denied that Iran and Russia have anything ‘resembling a military coalition’ despite a recent buildup of Russian military personnel and weapons in Syria.”

Kerry raised Syria in his meeting with Iranian Foreign Minister Mohammad Javad Zarif on Sept. 26 in New York. UN and Iranian mediation have been instrumental in finally reaching a solution to the Syrian government’s siege of rebel-held Zabadani, which has been covered by Al-Monitor’s Syria Pulse.

So when US President Barack Obama meets Putin this week on the sides of the UN General Assembly meetings in New York, he should focus on the common ground in the US and Russian positions, not the differences. It was Obama who was way out front in May 2014 on the need for a new global counterterrorism strategy, which this column endorsed as a means to test Iran’s intentions in Syria.

The same could be said for Russian intentions. The United States has the lead against IS, and should welcome Russian help to end the so-called caliphate’s reign of terror in Syria and Iraq. Kerry explained the shared interests of the United States and Russia in Syria on Sept. 22: “We agree that we both want a Syria that is whole and peaceful and stable and secular and where its sovereignty is respected. We both want to see [IS] destroyed and defeated and gone, as well as any other violent extremist entity. We both have concerns about the need to end the flow of foreign fighters and the attraction of those foreign fighters, which draws people to this battle which is dangerous for everybody.”

Kerry’s statement is a good start for Obama’s talking points with Putin. The United States has done an admirable job assembling an international coalition against IS, but there is no sign of imminent victory. The United States should welcome and coordinate Russia’s efforts against the common enemy. This is overdue. And it does not mean “giving in” on Assad, but rather playing it smart, getting Russian and Iranian support for a negotiated political transition on the front end, and dealing with the Syrian president on the back end. The United States can’t hide its weak hand in trying to negotiate around Assad, and should enlist Russia, as well as Iran, Turkey and Saudi Arabia, to help bring this terrible and tragic war to an end, as soon as possible.

Denise Natali writes this week that “political divisions are being encouraged in the hyper-fragmented Iraqi state and fight against IS as local groups seek to gain power, resources and recognition.”

“The result,” Natali adds, “has been an inadvertent enhancing of Barzani’s power through coalition military support, stronger reactions by those seeking political reform and deepening distrust between groups. … These trends have strengthened the role of political hard-liners who are unwilling to compromise.”

Natali concludes, “At the moment, a formal split between regions or a mass mobilization is unlikely, given the war against IS, deep party patronage networks and no clear alternative offered by opposition groups. Yet as the financial crisis deepens, corruption continues, political legitimacy is ignored and calls for decentralization go unheeded, the KRG [Kurdistan Regional Government] may have an administrative breakup, even in de facto form. At worst, these issues will continue to fester through open and silent resistance that may further stifle the stability and economic development of the Kurdistan Region.”