Obama prepared to work with Putin to broker Syria transition

Despite widespread condemnation of Russian airstrikes in Syria, signs of progress on UN-brokered talks on a political transition; Iran’s ties with Saudi Arabia and Egypt; the trend toward counterterrorism; United States should not treat Iraq as a "weak partner." 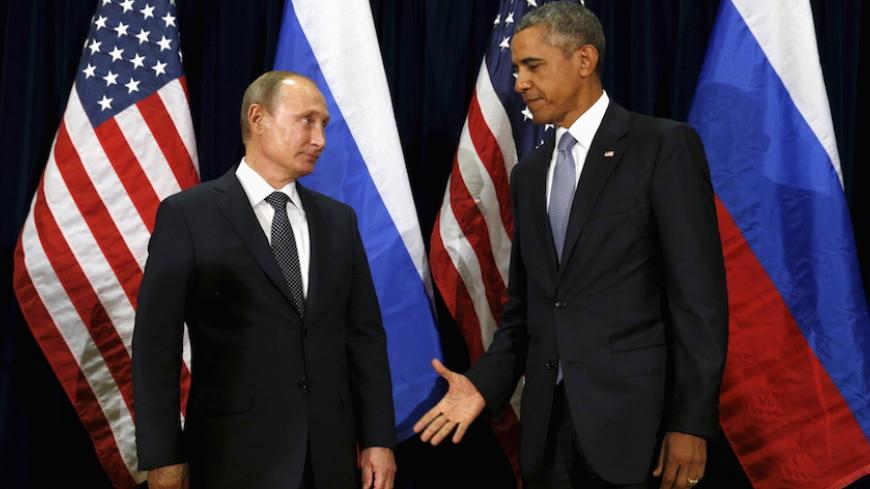 Lavrov: "There must be political change in Syria"

Although Russia’s airstrikes in support of the Syrian military provoked widespread condemnation from the United States and its coalition allies, there may also be traction for a new phase of UN-brokered talks on a political transition in Syria.

US President Barack Obama warned Oct. 2 that Russia’s actions could lead Moscow into a “quagmire” in Syria, and that indiscriminate attacks on “moderate” armed groups opposed to both the Islamic State (IS) and the Syrian government is a "recipe for disaster."

But Obama also offered to work with Russian President Vladimir Putin on a political transition in Syria that does not seem to precondition Syrian President Bashar al-Assad’s imminent departure.

"In my discussions with President Putin, I was very clear that the only way to solve the problem in Syria is to have a political transition that is inclusive — that keeps the state intact, that keeps the military intact, that maintains cohesion, but that is inclusive — and the only way to accomplish that is for Mr. Assad to transition, because you cannot rehabilitate him in the eyes of Syrians. … I said to Mr. Putin that I’d be prepared to work with him if he is willing to broker with his partners, Mr. Assad and Iran, a political transition — we can bring the rest of the world community to a brokered solution — but that a military solution alone, an attempt by Russia and Iran to prop up Assad and try to pacify the population is just going to get them stuck in a quagmire. And it won’t work," Obama said.

US Secretary of State John Kerry said Sept. 30, after meeting with Russian Foreign Minister Sergey Lavrov, that while “we don’t have yet a resolution with respect to some critical choices in that political solution, we think we have some very specific steps that may be able to help lead in the right direction. That needs to be properly explored.”

While making clear that fighting terrorism is his country’s top priority and “we cannot condition fighting [IS] by changing the political system in Syria,” Lavrov also offered hints at how the US and Russian positions on Assad might be bridged. The Washington Post’s Edith Lederer reports that Lavrov acknowledged that “Yes, there must be political change in Syria,” and that “parallel with this [fighting IS and terrorism] — not after — but parallel with this, many things could be done on the political front.” The Russian foreign minister, Lederer reports, went on to say that “the entire spectrum of Syrian society must agree on the key outlines of a secular state with democratic elections and the rights of all ethnic groups and religious minorities, and a constitution. He said the opposition Free Syrian Army and other 'Syrian patriotic opposition individuals' must be part of the political process. If a deal is reached and endorsed by the UN Security Council, and Syrians can see that the constitution protects their rights, 'I think that the problems of one or another personality would be much easier to resolve,' Lavrov said. He said that is what he discussed with US Secretary of State John Kerry and Gulf ministers on the sidelines of the UN General Assembly’s annual ministerial meeting."

Syrian Deputy Prime Minister and Foreign and Expatriates Minister Walid Moallem said in his speech to the UN General Assembly on Oct. 2 that while his government gives urgent priority to battling terrorists, it is also committed to the “political track” and will participate in the “brainstorming” committees to be organized by UN special envoy for Syria Staffan de Mistura in order to “mainly exchange ideas and conduct unbinding preliminary consultations whose agreed-upon outputs can be used to prepare for the launching of Geneva 3,” as reported by the Syrian Arab News Agency.

Laura Rozen reports that there may be an emerging consensus to apply the P5+1 (the permanent five members of the UN Security Council plus Germany) negotiating model to engage Iran and other countries to address the conflict in Syria: “'We have had some discussion on Syria … especially on the fact that we managed to achieve something … so important for the world through dialogue and diplomacy in this format,’ [European Union foreign policy chief Federica] Mogherini told journalists at the UN in New York following the P5+1 Iran ministerial meeting. ‘This could be also a useful format for other things,' Mogherini said. 'And obviously we will explore [this more] in the next days.’”

Iranian President Hassan Rouhani mentioned several times during his brief stay at the UN General Assembly in New York that the P5+1 format could be a useful model to address Syria and other regional crises, as Barbara Slavin reports.

Perhaps most significantly, Saudi Arabian Foreign Minister Adel al-Jubeir hinted at a possible shift in the kingdom’s position on a transition in Syria. Speaking to reporters on the sidelines of the UN General Assembly meetings, Jubeir on the one hand conveyed a hard line, openly discussing a “military solution” that would lead to the overthrow of Assad, and that support for the Free Syrian Army and other “moderate” Syrian armed groups opposed to Assad “would be intensified.”

Nonetheless, Jubeir did not rule out talks with Iran, which he described as an “occupying force in Syria,” including in the context of a meeting among the United States, Russia, Turkey and Saudi Arabia. Perhaps most telling was that Jubeir appeared to inch closer to the emerging US and Turkish positions that while Assad must eventually leave power, the Syrian president’s departure could take place in the context of a yet to be defined transitional period.

"Sometime between the formation of this council and elections [as per the 2012 Geneva agreement outlining a political transition in Syria], the theory of this is that — whether it's a day or a week or a month, I don't know — Assad would sail into the sunset, Jubeir said. If Assad accepts the political process where he transitions out of the country, I think we can get somewhere," as reported by Lederer for Stars and Stripes.

The perhaps thin reed of an opening on Syria comes as Saudi-Iranian relations otherwise went from bad to worse last week. Ali Hashem writes about how the tragedy of the estimated 464 Iranian pilgrims killed in the stampede during the hajj on Sept. 24 may have been a lost opportunity for progress in Saudi-Iran relations. Rouhani cut short his trip to New York for the UN General Assembly to return to Iran to address the crisis over the Iranian deaths at the hajj. The Saudi government has reported that 769 pilgrims died and 934 were injured during this year’s hajj, although the overall death toll may actually exceed 900.

While Saudi-Iran relations have soured over Syria and Yemen, Saeid Jafari examines how the Syria war has resulted in a modest reset in Iran-Egypt ties, as both Tehran and Cairo are wary of the expansion of radical Salafist groups that threaten the region.

The Russian airstrikes in Syria were preceded by news that Moscow had brokered an intelligence-sharing alliance among Russia, Iran, Iraq and Syria. This column has, since January 2014, backed a US-led regional initiative for a more assertive regional counterterrorism alliance. One year ago, in September 2014, we wrote that the United States should leverage the emerging Iran-Syria-Iraq counterterrorism axis in the battle against IS, acknowledging that while “the United States and Iran cannot formally link arms in Syria … the trend to watch is the tentative emergence of what may be a truly regional counterterrorism coalition, with potential for a transformation in regional security, if managed carefully.”

Mustafa al-Kadhimi reports that US-Iraq relations are in crisis, requiring a reset by both Baghdad and Washington in order to address the fight against IS: “Iraq would have to move toward making independent and muscular decisions as a US partner to further both countries’ common interests, especially the fight against terrorism. The United States would have to adapt a new approach to Iraq and no longer treat it as a weak partner that can be neglected or abandoned as in the past. Iraq’s geopolitical importance requires that its international partners, foremost among them Washington, not ignore it or deal with it based on the political wills of influential regional powers.”